Rural health care options have expanded in Susquehanna County thanks to the natural gas industry’s contributions and nothing improves like a good economy.

One in five Americans live in rural communities. Many will tell you that they appreciate the closeness to nature and agriculture and knowing who their neighbors are, even if the closest family lives a half mile down a dirt road. But the relative isolation that attracts more than 60 million to live in the country or in small towns also presents a challenge when it comes to having access to specialized medical services and, in emergencies, a good hospital.

Thursday, Nov. 21 is National Rural Health Day. It was established by the National Organization of State Offices of Rural Health to highlight accessibility issues, challenges faced by rural healthcare providers, and to champion “the selfless, community-minded, can-do spirit that prevails in rural America.” There are few places where so many have stepped up to not only overcome a dire healthcare scenario but to create a new model for rural American than in Susquehanna County, Pennsylvania.

A study released by the Center of Disease Control (CDC) in 2017 indicated that those residing in rural areas are more likely to die from heart disease, cancer, unintentional injuries, respiratory disease and stroke than their urban counterparts. The report suggests the deaths would have been preventable if adequate health care were more readily available. PEW Research Center data from 2018 shows the average drive time of 11.7 minutes to a hospital for Pennsylvania residents jumps to more than 30 minutes for rural folks. Other factors cited by the CDC include lower incomes and fewer people with health insurance.

“When it comes to a stroke or heart attack, whether or not you are treated in the first hour will impact your quality of health,” said Loren Stone, Endless Mountains Health Systems (EMHS) Chief Executive Officer. Good hospitals are pillars of rural communities, Stone continued. Without them and good education, “you don’t have vibrant rural communities.”

Cabot Oil & Gas Corporation came to the region in 2008 to begin the process of exploration for natural gas in the Marcellus shale that lies under the entire county. In addition to sparking a renaissance in an otherwise sagging economy by providing steady employment in the gas fields and with partner industries, Cabot looked for other ways to connect with and support the community.

Viewing the need for a new hospital as vital for families who were driving almost an hour to Scranton or Binghamton, NY, for primary care, Cabot initiated a Capital Campaign in 2012, putting up $1 million immediately and promising another million as a match for other corporate donations. Cabot’s business partners, subcontractors and suppliers were quick to respond, and the initiative proved to be contagious.

“Cabot brought awareness of the need for the facility and brought in the rest of the community to match in-kind,” Stone recalled. Other regional businesses, foundations and individual members of the Susquehanna County community brought their contributions to the table and, in less than six months, the campaign had exceeded its goals by raising $4.4 million. The success of the campaign even attracted the support of the United States Department of Agriculture (USDA), which extended a $25 million loan, and eventually the EMHS reached their $35 million needed to complete the project.

The new hospital opened in 2013. Since then, Stone cites numerous ways in which the community is better served, including specialty services and more jobs. “Healthcare providers are also among the largest employers in rural communities which provides an economic benefit,” he remarked.

“Cabot was a significant partner in our facility replacement project,” Stone stated. “If not for their capital campaign, we wouldn’t have been able to build the physicians’ offices on the campus so that they can be co-located to the hospital.”

National Rural Health Day is still a relatively new concept to Stone, but he likes the idea and believes that the EMHS board will adopt it. “We’ll embrace it and celebrate all that it means to be a rural provider of healthcare services,” he stated.

Above reposted, with permission from Well said Cabot.

Editor’s Note: It’s important to also note Susquehanna County health has been improving since the launch of the shale revolution. Although we can’t establish a definitive causal link, it’s undeniable that improved economies produce better health because more citizens have more access to health care and that’s what’s happened in the County with natural gas development. Check out these statistics from the Pennsylvania Department of Health: 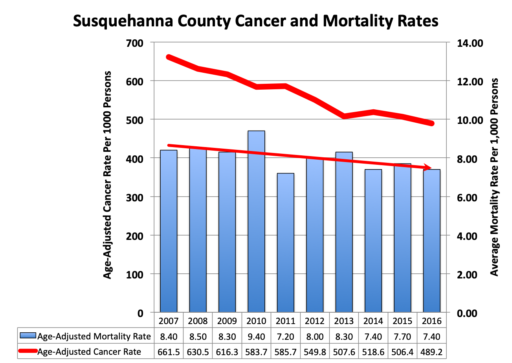 13 thoughts on “Rural Health Makes Gains in Susquehanna County, Thanks to Natural Gas”