Pennsylvania has drastically reduced its contribution to the DRBC, an overdue action that properly rewards the agency for nearly a decade of fracking delay.

I bring wonderful news. Governor Tom Wolf, on July 11, allowed HB 219, the Pennsylvania budget for 2017, to become law. It cuts DRBC funding from the Commonwealth, already well below previous levels, by half to $217,000. That’s $217,000 more than it ought to get but, nonetheless, a giant step in the right direction. This is the price of the DRBC running scared of fractivists for almost a decade; the cost of incompetence, intransigence and obsequiousness toward fractivist special interests and the wealthy families who fund them.

Here are three most beautiful lines from the budget: 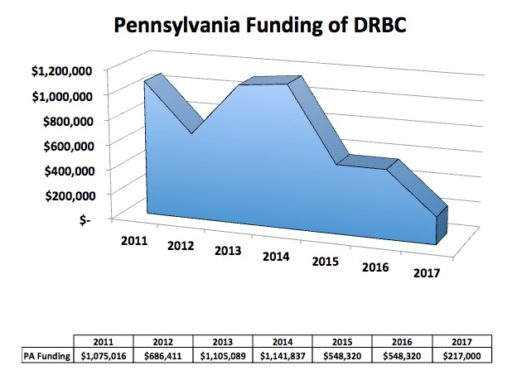 Contributions to the SRBC were also halved, reflecting the fact the agency has more than $40 million in reserves mostly built up, no doubt, from fees charged to the natural gas industry. The DRBC has no such reserves, as a consequence of its head in the sand attitude toward gas drilling. Therefore, the cut is far more meaningful in the DRBC case, which makes it especially sweet.

Moreover, make no mistake; while these cuts can also attributed to the need to reduce spending, the DRBC was targeted by legislators from the northern part of the basin (e.g. newly elected Rep. Jonathan Fritz). They’ve had it with DRBC complicity in a con game depriving landowners of the same economic opportunities as those in the SRBC region. They’re not taking it anymore. No more BS, no more double-talk, no more running scared of radical fractivists, no more kowtowing to the Haas and Heinz families at the expense of locals.

UPDATE: After posting the above, It occurred to me to investigate further what “Special Projects” Pennsylvania was funding the last two years. I went to the DRBC Fiscal Year 2016 audit and found this on page 58: 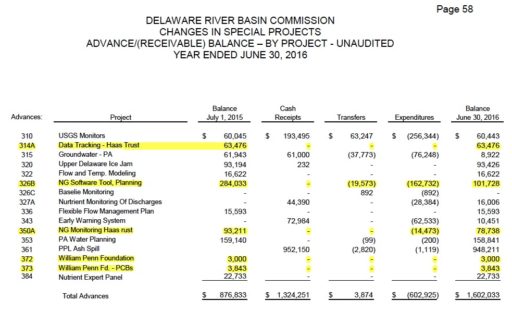 Notice the DRBC still lists funding from William Penn Foundation, the principal funder of the chief opponent of natural gas drilling in the basin, that being the Delaware Riverkeper. It’s only a tiny amount—leftover money still in the account. However, also notice “NG software tool, planning” and “NG monitoring,”—two activities presumably related to natural gas drilling—were still ongoing as of June 30, 2016. We know the former was originally a William Penn Foundation initiative intended to provide an excuse for not enacting regulations in 2011. The Haas trust (funder of the latter) presumably refers to one of the trusts set up by the same Haas family that is the William Penn Foundation and finances the Delaware Riverkeeper that seeks to prevent all gas drilling everywhere and has sued the DRBC over this issue.

The outrageously corrupt and incestuous relationship between the William Penn Foundation, the Delaware Riverkeeper and the DRBC, in other words continues unabated as Pennsylvania’s representative on the DRBC under both Democrat and Republican governors, Kelly Heffner, sits there and allows it to happen without even, apparently, raising an objection. We’re also now well into the administration of Steve Tambini as DRBC Executive Director, for whom I had modest hopes things might change a bit. Yet, the collusion continues. Enough!

7 thoughts on “Running Scared Has Its Price: DRBC Funding Slashed by PA”