A deceptive Bill McKibben tweet the other day reveals the stupid fracking games being played by the Rockefeller family and how they manipulate the press.

Bill McKibben is one of the slipperiest of characters; a messianic voice of peace, love and reason who happens to like violence when others practice it and plays pauper to advance the myth of self-sacrifice in pursuit of his holy cause. The fact he’s bought and paid for by the Rockefeller family seldom makes the many sympathetic news stories in which he so prominently features as he seeks to kill oil and gas. His tweeting is ever revealing of his guile and one of his latest especially so.

And, here’s the letter, which is a response to that excellent op-ed by liberal financial investor Gary Sernovitz that Jim Willis wrote about here: 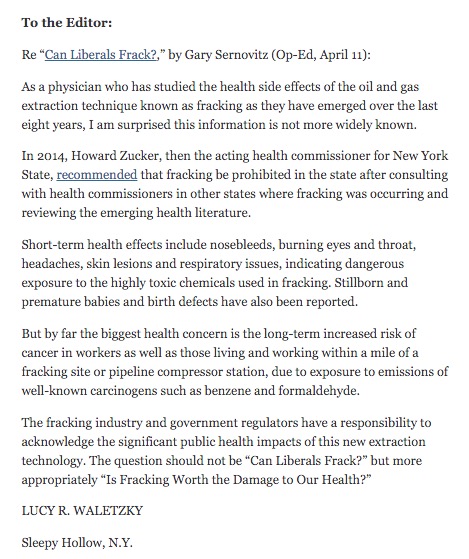 Ms. Waletzky’s letter is the typical mindless bleating of fractivists who know nothing but talking points. Her reference to the Zucker health study, long ago proven to be a peer review scam and nothing more, combined with her recitation of bogus claims from the “List of the Harmed” about nosebleeds and the like indicate a letter of uncommon banality for a fractivist. It hardly rises to the level someone of McKibben’s fractivist rock star status would ordinarily extol. One suspects the Rockefeller family would like to see a bit more for their money.

As one alert reader and commenter noted, though. the Rockefeller family got just what it wanted in this case. How so? Well, Lucy R. Waletzky of Sleepy Hollow is Lucy Aldrich Rockefeller Waletzky, daughter of Laurance Rockefeller and brother to Larry Rockefeller, the scion of Beaverkill who created the very private Catskill development where the NRDC gang hangs out. Larry is the family connection to the NRDC, the Open Space Institute where second cousin or so Kim Elliman runs things and from which Joe Martens hails, the Catskill Mountainkeeper and a host of other related entities. 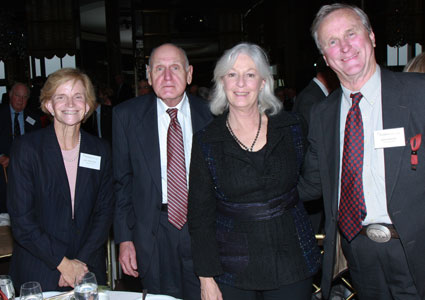 Yes, Lucy is Larry’s sister. Her Wikipedia page describes her as “an American philanthropist and environmentalist,” the kind of career you can claim for yourself if you’re born to the sort of power and wealth she’s enjoyed. She has a medical degree as well but few medical doctors will blame nosebleeds on fracking when there is zero evidence of the same in bonafide medical studies. Perhaps that’s because her medical specialty is psychiatry. She’s also chair of the New York State Council of Parks,Recreation and Historic Preservation and active with the Open Space Institute.

Waletzky is obviously an accomplished individual and has every right to write letters to the New York Times where they’re guaranteed publication however banal. Moreover, the high society readers to which the Times is written will know what that “R” stands for, but Bill McKibben’s tweet is just plain deceptive. His recommendation of a letter written by the same people who pay his bills is emblematic of how the fracking battle is fought and who’s behind it. McKibben is the not so subtle, but melodious. trumpeter of half-truths who requires no accompaniment and offers a concert of fractivist myths every time he speaks. Yes, Ms. Waletzky wrote a letter, but it wasn’t a particularly good one. More importantly, how many of McKibben’s fractivist followers will know it was from one of the Rockefellers who fund his activity and a psychiatrist, not the kind of doctor who knows anything about nosebleeds?

Waletzky is the kind of doctor interested in her own health, though, and so participated in a stunt study by the Environmental Working Group, another one of the fractivist causes funded by the family. It detailed “78 different industrial compounds, pollutants, and other chemicals were found in Lucy Waletzky’s blood and urine.” Going through the list I looked and looked for things related to fracking or oil and gas production. I saw chemicals from incineration, chlorine bleaching, insecticides (used, no doubt in maintaining the lawns of her Sleep Hollow estate), crystal tableware, dental amalgams (fillings), fluorescent lamps (you know; the ones we all have to use now for the sake of the environment), storage batteries and dozens of other things but oil and gas, with the exceptions of gasoline additives, PVC pipe production and lubricants, weren’t to be found. There was nothing remotely related to fracking per se.

Notwithstanding the lack of that particular smoking gun, there was this; Lucy R. Waletzky has Methylmercury in her system the EWG tells us and it may well have come directly or indirectly from coal-fired power production. That coal-fired production is, of course, being replaced by natural gas-fired production that produces no mercury. That would be the natural gas produced from fracking; the process Waletzky wrote the New York Times to oppose and which letter her loyal servant, Bill McKibben, graciously recommended to others. These are the stupid fracking games played by the Rockefeller family.