The Delaware Riverkeeper Network, a political action group masquerading as a charity, failed again as two FERC members were appointed by unanimous consent.

Earlier in the week a regular reader sent me an action alert from the Delaware Riverkeeper Network, known not so affectionately here as the Delaware Povertykeeper or right arm of the Philadelphia gentry class. He sarcastically made the subject line “No lobbying here.” It was all about the continuing and quite extensive efforts of the Riverkeeper/Povertykeeper to prevent new FERC appointments so key pipeline projects would be stalled and kept in limbo ad infinitum.

The fact the Riverkeeper/Povertykeeper even imagined this was a viable strategy ignored the political realties; both Democrats and Republicans want those projects. This is why Maya and company, the biggest mouths on the fractivist scene and hired guns for elitist power-brokers were ignored and those appointments have now been approved. It was a big fail.

The Delaware Riverkeeper Network is a totally political animal—some might say a shrieking hyena—and here is what prompted our reader to call it out as lobbying (although, technically speaking, it’s not because it deals with appointments and not legislation): 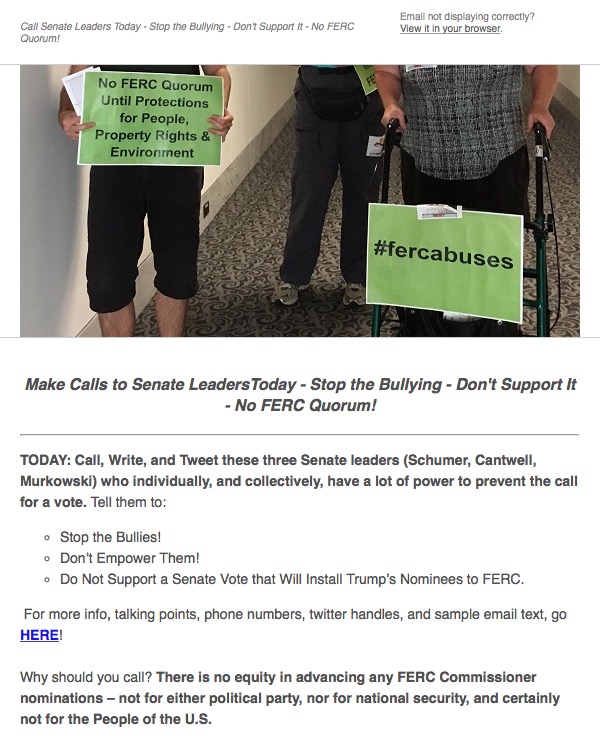 And, what happened? Well, the Riverkeeper/Povertykeeper was shut out, according to this story from the Houston Chronicle:

WASHINGTON (AP) — The Senate has approved two Republicans nominated by President Donald Trump to serve on the federal commission that oversees the nation’s power grid and natural gas pipelines.

Yes, the Senate acted by unanimous consent to make these appointments. The big mouths at the Delaware Riverkeeper Network had not the slightest impact on the outcome. Its influence, outside of a few courts where ideologically inclined judges control, has shrunk to the point where no one pays any attention to all the shrieks. They’re just background noise.

4 thoughts on “Riverkeeper Fail: The Shrinking Influence of a Big Mouth”