The cowardly DRBC that wants us to imagine it’s fearful of what natural gas production might mean for the river basin is full of balderdash – it uses gas!

The resolution to consider some vague sort of ban on fracking in the Delaware River basin wasn’t the only one adopted by the DRBC on September 13, 2017. There was another and this one makes a mockery of everything proclaimed in the one everyone’s writing about.

The now infamous resolution on the subject of fracking was a piece of balderdash. That’s a term not used much anymore but very useful. Defined as “senseless, stupid, or exaggerated talk or writing” or “nonsense,” it fits like a glove with the fracking resolution, which was designed to be read any way anyone at all wanted to read it. 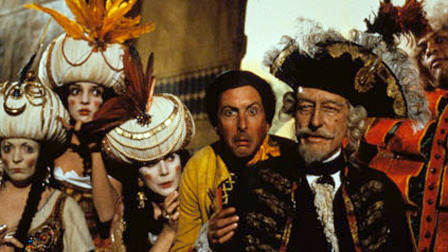 The Adventures of Baron Munchausen “Your reality, sir, is lies and balderdash and I’m delighted to say that I have no grasp of it whatsoever. “

It might be headed toward a ban or it might not. All we know is they’re going to produce some sort of draft by November 30, conveniently following the expected date of the oral arguments on the WLMG lawsuit. This tells us it’s probably another maneuver designed to maintain the limbo status in effect the last seven years as the cowardly agency avoids offending special interests.

Putting aside those aspects of the action, whatever it was, it’s the justification—these Whereas paragraphs—where the real balderdash is to be found (emphasis added):

WHEREAS, since the comment period closed, the Commission has continued to receive comments and information from many stakeholders with diverse views about natural gas development activities within the Delaware River Basin and has closely followed the evolving scientific literature on the impacts of natural gas development on water resources;

WHEREAS, the combination of hydraulic fracturing with horizontal drilling and related activities for extracting natural gas from tight shale formations presents risks, vulnerabilities and impacts to surface and ground water resources across the country;

WHEREAS, the DRBC commissioners have conferred in good faith on the complex and evolving science and policy questions related to natural gas development;

WHEREAS, the Delaware River Basin supplies drinking water to over 15 million people, and the health, safety and welfare of the region’s population as well as the viability of its commerce and industry depend upon the use, conservation, management and control of the basin’s water and related natural resources;

WHEREAS, the DRBC’s state and federal commissioners have for decades acted jointly through the DRBC to protect the basin’s shared water resources, for example by adding to the Commission’s Comprehensive Plan the designation of the entire non-tidal main stem Delaware River as DRBC “Special Protection Waters”; by developing and implementing innovative approaches for restoring water quality in the Delaware River Estuary to revive basin fisheries; by cooperatively managing state and federal pollution control regulatory programs; and by managing stored water and water withdrawals to maintain adequate freshwater flows;

WHEREAS since 2010, among the Basin states, Pennsylvania has advanced statutory and regulatory actions regarding natural gas drilling, and New York has completed a state environmental impact analysis to preclude certain natural gas development activities;

I have previously noted the “over 15 million people” figure is completely bogus; a big lie if there ever was one. Unfortunately, it gets repeated ad nauseum in every news story written by every lazy reporter, which is most of them. I’ve also noted “stakeholder” is an imaginary friend created by those desiring influence over matters that are mostly none of their business. The “scientific literature” reference is also a joke given what we know from previous Freedom of Information requests made to the DRBC and the evidence the agency already has from those times when it wears its SRBC hat, not to mention the EPA study.

Yet, the DRBC wants us to think it’s acted in “good faith” after seven years of doing nothing but taking money from the same William Penn Foundation funding the Delaware Povertykeeper a/k/a Riverkeeper. It claims “extracting natural gas from tight shale formations presents risks, vulnerabilities and impacts to surface and ground water resources across the country” when it has the data in hand from the SRBC to show the opposite. It claims, moreover, water pollution accomplishments and duties it knows full well are not its responsibility, but the work of the states who administer the Clean Water Act by designation from the Feds.

It’s balderdash everywhere you look, as if the DRBC were really the Down River Balderdash Club. It even acknowledges “the viability of its commerce and industry depend” not only “upon the use, conservation, management and control of the basin’s water” but also “related natural resources.” This is a point I once discussed with Steve Tambini, noting the DRBC had a duty to ensure a water supply for economic development in the basin. While it’s nice to see that finally acknowledged (Carol Collier was blind to it), the idea the agency has responsibility managing and controlling “related natural resources” is an extraordinarily dangerous one that opens the door for regulating land use, mining, forestry and who knows what else.

What the DRBC is saying, of course, is that whatever it is, it wants to regulate it and, in the gas of natural gas, it somehow considers it a risk and vulnerability, which leads us to the second resolution it adopted on September 13, 2017. 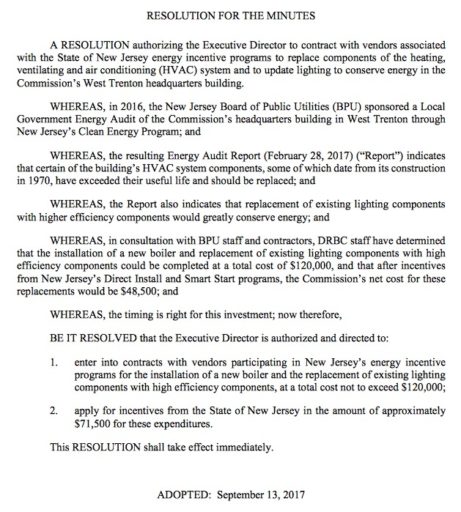 When I saw the DRBC was installing “a new boiler” and there was mention of what kind of boiler it was, I was very intrigued, of course. I wrote and asked for a copy of the Local Government Energy Audit referenced and promptly received a digital copy of the copyrighted document (which I cannot, therefore, share in total). It’s a rather thorough document, though, and include this interesting little statement which I can share under Fair Use principles:

“Gas heating systems can provide heating equivalent to older systems, but use less energy. These measures save energy by reducing the fuel used by the heating due to improved combustion and heat transfer efficiency.”

Yes, the report indicates the DRBC headquarters is heated with natural gas and so is the hot water the agency uses. The new boiler is a gas boiler. You read that correctly. The DRBC, on the very same day it passed a resolution saying it wanted to considering banning natural gas production it passed another to install a new gas boiler to keep the staff and the commissioners warm. They had good reason, of course. The audit suggested the building was suitable for solar panels but at a cost of $364,000 which, obviously, made them unaffordable. Moreover, an analysis of energy use showed the gas heating system generated 63% of energy used but only 18% of energy costs. 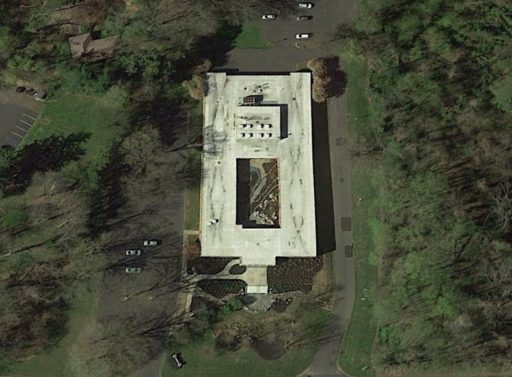 The DRBC’s empty-rectangle gas-heated headquarters in West Trenton, NJ. Note the air exchangers on the roof.

Notwithstanding this wise economic decision, the irony couldn’t be more sweet. It’s as if the Mayor of New York City banned big gulp sodas while sipping on one. Or, if you will, if Trust-Funder Tom Wolf voted for a fracking ban to protect New York City water drinkers from imaginary threats that don’t stop him from drinking Harrisburg water. This is how politically incompetent the DRBC really is and how blinded the agency is by its fear of not being politically correct with special interests.

Steve Tambini is following, not leading, and political frauds such as Governor Andrew Corruptocrat and Trust-Funder Tom are exploiting the vacuum to demagogue the issues while the ship is being steered by the same people who fund the Delaware Povertykeeper, which also operates from gas-heated offices, of course. It’s all one big group of buffoons, malcontents and snobs operating as the Down River Balderdash Club, as those of us up river suffer the consequences.