RGGI — a consortium of 10 Northeast and Mid-Atlantic states — is “the first mandatory market-based program in the United States to reduce greenhouse gas emissions,” according to the proposal.

Its primary goal is to make electricity generated with natural gas and coal more expensive through a cap-and-trade system where “emission allowances” would be required to be purchased. Revenues generated from the sale of carbon credits at quarterly auctions are returned to the state for “reinvestment in efficiency, and other greenhouse gas-reduction programs.”

This is a regressive taxation scheme that most harms the poorest citizens who spend a greater percentage of their income on energy and heat. RGGI would be taxing poor people in order to subsidize Big-Solar and Big-Wind to make them artificially competitive in the energy marketplace.

According to a recent study by the CATO Institute, states currently enrolled in RGGI experienced economic growth stagnation — a 34% reduction in energy-intensive industries and a 12% decline in the goods-production sector. It only make sense that an increase in energy costs would be felt across a broad swath of the economy and negatively affect the state and its citizens. But is it even needed?

To justify imposing this economically crippling agenda, the governor claims a litany of negative effects from supposed man-made warming, including increased precipitation and flooding, heat-related illness and death and worsening air pollution. None of these — absolutely none — are supported by science and facts. These are simply fabricated assertions intended to gin up public alarm over impending climate catastrophe.

Leading off the governor’s false climate calamities is that of increased precipitation and flooding. It is here that Tom Wolf mistakenly — or intentionally — conflates weather with climate — a common practice of the popular media.  It is true that Pennsylvania’s 64 inches of rain in 2018 was the most on record. The following year was also a wet one, but so far 2020 is on pace to be substantially below the 50-year average of 44.6 inches. Further contradicting claims of increased flooding are NOAA’s records of the biggest rainfall amounts that show a decline since a peak in the 1940s and 1950s. 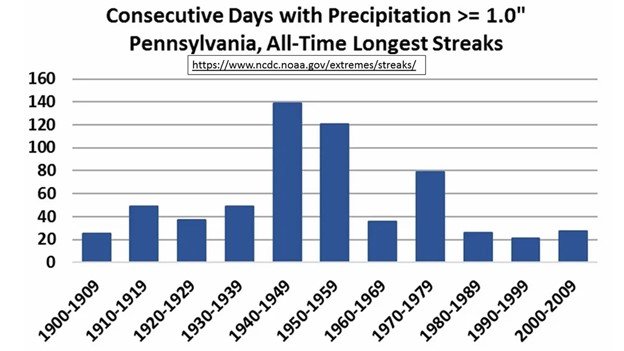 Perhaps Gov. Wolf was recalling that he personally viewed flooding of the Susquehanna River in Harrisburg in 2018 when it crested at 17.3 feet. Much was made of the flooding at the time. However, the 2018 flood ranks just 31st on the list of greatest floods at Harrisburg — and only a bit more than half the record set by Tropical Storm Agnes in 1972.

Allegations of increasing heat-related death are debunked by some of the largest global studies on the subject. Dr. Antonio Gasparrini and a large team of collaborators from around the world examined more than 74 million deaths and concluded that cold weather kills 20 times as many people as heat. Another study of temperature-associated mortality in the U.K. and Australia found that more than 15 times as many people die due to cold as heat in these countries.

The inconvenient fact is that cold kills considerably more people than heat. It is, by far, the biggest weather-related killer worldwide. A warmer globe would mean far fewer premature deaths associated with temperature.

Finally, the allegation that warmer temperatures are leading to increased air and water pollution is dispelled by data from the EPA that reveal a long-term steady decrease in all pollutants measured despite a warming climate. 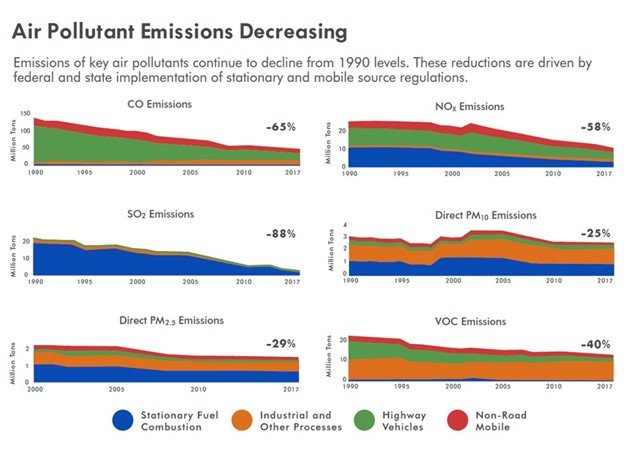 RGGI would damage the Pennsylvania economy with higher energy prices and job losses for no reason other than to boost tax revenues for a spendthrift government and enrich the politically favored in the so-called green-energy business. Gov. Wolf’s promotion of fear with false claims to advance the program is demagoguery at its worst.

Note: The Pennsylvania Environmental Quality Board will be taking public comments from December 8th through 12th.

Reposted, with permission of the author, from BizPac Review.