You know you hit the target when the opposition squeals like a stuck pig. Food & Water Watch has taken a huge hit as its paid Dimock shill has been revealed.

If any evidence was needed that Food & Water Watch is embarrassed and frightened by the relevation that Craig Stevens has been its paid Dimock shill all along, it has been provided by Wenonah Hauter. The haughty Hauter has gone apoplectic, telling us how proud she is of Craig Steven’s contributions to fractivism while simultaneously screaming, in so many words, “how dare you, how dare you fight back to tell your side.”

Two articles explain. The first is a calm, cool, collected post by Reggie Sheffield in the Susquehanna Independent. which is well worth reading in its entirety tio understand what happened in the courtroom last week. Reggie notes Craig Stevens reluctance to share the facts:

During his deposition, Stevens first denied receiving payments from Food and Water Watch but then changed his answer to say he was only receiving travel reimbursement checks.

After being confronted with cancelled checks from Food and Water Watch, Stevens then again changed his testimony to say that he in fact had a contract with Food and Water Watch which was paying him $4,000 a month for “consulting and educational outreach.”

Stevens has traveled across the country speaking out on problems he sees with the fracking industry, including engagements at the United Nations sponsored by the U.N. Sisters of Mercy and the New York State Assembly…

Stevens’ admission that anti-gas organizations had paid him thousands of dollars has raised more than a few eyebrows locally as most observers were under the impression that he and Kemble had been speaking out against the drilling industry out of an overabundance of concern over its effects on the environment and local community.

That was a story in itself but, being a real journalist, Sheffield asked Food & Water Watch for its statement and received this (emphasis added):

“Craig Stevens is an important and effective voice against the reckless practices of fracking companies like Cabot,” Food & Water Watch Executive Director Wenonah Hauter said in an e-mailed statement.

“He has witnessed first-hand the devastation fracking has caused in Dimock and elsewhere, where Cabot was cited for 265 violations in a four-year period. We have reimbursed Craig for travel and other expenses, allowing him to travel the country to speak out against fracking and educate others about the inherent harms of the industry,” Hauter’s statement continued.

An “important and effective voice” she says about the guy who held up Ray Kemble’s pre-drill water tests in the air before New York legislators telling them it showed clean water when, in fact there was benzene in it, no doubt from the junk vehicles on his property. That’s what Wenonah Hauter was proud to finance. And, notice the weasel wording to soften the impact of paying Stevens by calling the $4,000 per month “other expenses.” 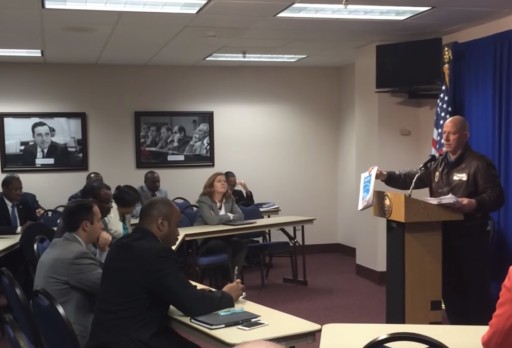 Craig Stevens lecturing Floridians on fracking. Was this one of his Food & Watch financed tours?

But, to truly appreciate Hauter’s meltdown you need to read her hysterical article in Food & Water Watch’s EcoWatch. Here is the over-the-top title:

Sneak attack? No, this is a response to a phony lawsuit filed against Cabot by greedy “Pigs to Rigs” trial lawyers to generate attention and, they hoped, new clients. That lawsuit was withdrawn on their own motion because they knew it had no merit and was prohibited by a previous agreement. They had hoped to make a quick hit, produce some publicity and then pull back after the filing had achieved its rain-making objective. It didn’t work. Cabot said enough and sued them back. That’s the real story. Ray Kemble is only a victim to the extent he was drawn into that phony lawsuit by those lawyers.

Hauter then goes totally apoplectic, threats and all, including this (our observations in red):

Cabot’s recent filing with the court asked the judge to place a cancer patient with no resources in jail until its lawyers have had a chance to interrogate him. The judge rejected its request and after the hearing, Cabot’s spokesperson tried to deflect from the corporation’s persecution of Kemble by claiming that it is really just using the courts to go after groups that have provided financial support to Kemble and others who have been victimized by Cabot’s irresponsible fracking operations.

[No, Cabot doesn’t want Kemble in jail. It wants his deposition, has a right to one and is asking the court to enforce an order to compel him to submit to a deposition. All Kemble has to do is answer questions truthfully. He is putting himself in jeopardy because, for some odd reason he doesn’t want to talk. And, the judge did not reject anything. He simply gave Kemble more time, which Cabot actually suggested. Food & Water Watch’s harsh reaction is, of course, the prima facie case for the fact Cabot is, in fact, targeting and hitting groups that have financed the Dimock lie.]

The irony of Cabot’s claims is rich. While Cabot whines about advocacy groups supporting affected citizens in their work to stop fracking, its spokesperson didn’t mention the over $600,000 the company paid out in lobbying and campaign contributions between 2011 and 2014 in Pennsylvania in an attempt to cover up the 265 operating violations it racked up over the same period…

[As has been noted here numerous times, those 265 violations are vastly overstated as to relevance, with many being for the same incidents, many being paperwork violations, etc.. Moreover, Food & Water Watch takes in $17 million per years, huge portions of which are spent doing grass-roots lobbying and paying for people such as Craig Stevens.]

Elected officials have happily taken campaign money from Cabot to protect its interests in the state. Food & Water Watch has been proud to stand alongside Kemble and all the other victims of Cabot and other fracking companies in Dimock, across Pennsylvania and around the country. We’ve provided funding so that people in Dimock who have had their drinking water taken from them have access to clean water, and to assist these courageous frontline advocates who have been fighting hard against crooked companies and bought-and-paid-for elected officials who look the other way. And we will continue to do so even in the face of corporate intimidation.

It’s the same old lines and same old con. Food & Water Watch is paying a slew of staff people huge salaries and throwing money at folks such as Craig Stevens to attack Cabot for greed, dirty profits, etc. as it aligns itself with greedy trial lawyers making victims of everyone, including Ray Kemble. But, one thing has changed. Cabot is fighting back and they really hate it. Cabot is making Food & Water Watch pay for what has been a dirty, greedy game on the latter’s part. That is a wonderful thing.