Replacing coal with shale gas has allowed the U.S. to reduce CO2 emissions more than anyone else and for the world to catch up more of this must be done.

Our friend Mark Dye sent me an intriguing article from AlJazerra last night. It was, in turn, a Reuters piece taken from the “BP Statistical Review of World Energy 2019” launch. What was most interesting was this; fossil fuel energy use is going up not down as folks such as Mark Jacobson have suggested would happen as renewables increased.

Renewables such as solar and wind have achieved no significant dent in the energy production either. They’d have to increase by wild imagination proportions to do so, meaning a hipster, vegan, green tech economy is simply not sustainable. This is an opportunity for gas and a teaching moment for the hipsters.

AlJazerra, of course, is hardly an unbiased source; they are ultimately in the business of pushing Mid-East oil. Likewise, the BP launch was filled with politically correct spin intended to portray the company as a green leader. The actual BP Statistical Review of World Energy, though, is a respected source of data by all sides. Therefore, I decided to bypass the pseudo-event reporting and go directly to the source. 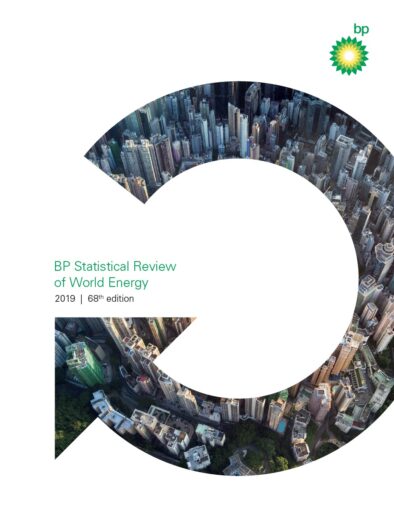 The “BP Statistical Review of World Energy 2019” is replete with facts and insights into the world energy situation. This includes such valuable tidbits as these:

The most significant part of this year’s BP Statistical Review is the following analysis (emphasis added):

Over the past five years or so, the rapid growth in renewable energy, together with an edging down in the coal share, has led to a more sustained improvement in the carbon intensity of the power sector, such that the impact of increasing power demand on carbon emissions has been partially offset. But it’s still only partial: despite the rapid gains in renewable energy, the pace of growth in power demand has meant that overall carbon emissions from the power sector have increased substantially over the past three years. It hasn’t been possible to decarbonize the power sector quickly enough to offset the growth in demand.

To give a sense of the challenge posed by the strength of growth in power demand: if we focus solely on renewable energy, given the profile of demand growth, to maintain the level of carbon emissions from the power sector at its 2015 level, renewable generation would have needed to grow more than twice as quickly than it actually did: by over 1800 TWh over the past three years, rather than its actual growth of a little over 800 TWh.

Alternatively, the same outcome for carbon emissions could have been achieved by replacing around 10% of coal in the power sector with natural gas. The intuition is that renewables are still a relatively small share of power generation relative to coal, and so the proportional movements in coal are a lot smaller.

As I mentioned, the general point here is that the robust growth in power demand, particularly in the developing world, greatly adds to the difficulty of decarbonizing the power sector. You have to run very fast just to stand still.

This highlights the importance of adopting a range of technologies and fuels; rather than just relying on renewables.