Rep. Jonathan Fritz, a native of Wayne County, Pennsylvania has called foul on the members of the DRBC and their double-standards when it comes to fracking.

Pennsylvania House of Representatives member Jonathan Fritz, Republican from Wayne County, is one of the rising stars in the Pennsylvania House. MDN editor Jim Willis has met and spoken with Rep. Fritz twice. Great guy. Conservative. Head screwed on straight. And, he’s called foul on the DRBC ban resolution with one his own. 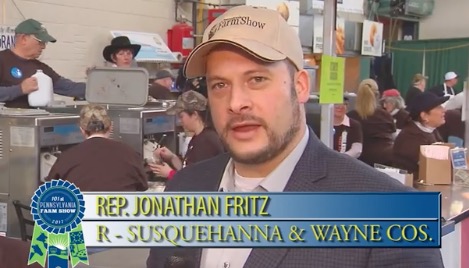 Fritz serves areas of both Wayne and Susquehanna counties in the northeastern corner of Pennsylvania. Does Wayne County sound familiar? It should. It’s one of two counties where the radicalized Delaware River Basin Commission (DRBC) wants to ban fracking. A few weeks ago, the Democrat governors of three states—Pennsylvania, New York and Delaware—had their representatives vote to begin the process of placing a permanent ban on hydraulic fracturing (fracking) within the Delaware River Basin.

This is supposedly because fracking is a threat to some imagined 15 million people who get their drinking water from the Delaware River basin. Just one teeny tiny problem.

Fracking is allowed, and has been happening for over 10 years, in the neighboring Susquehanna River Basin, where over 4 million people get their drinking water and three of the members are the same as the DRBC. The SRBC (Susquehanna River Basin Commission) wisely does not restrict fracking. Rather, they only manage water withdrawals/use.

There have been no water issues in the SRBC. Yet, the SRBC members who form the majority of the DRBC demand a ban based on a false meme of water contamination risk. Last week, Rep. Jonathan Fritz introduced House Resolution 515, which (if passed) calls on the DRBC to abandon its efforts to strip away the property rights of people in the DRBC’s jurisdiction by enforcing a frack ban. Here it is:

WHEREAS, the residents of this Commonwealth have waited patiently for the Delaware River Basin Commission (DRBC) to take action regarding the advancement of natural gas extraction in the basin; and

WHEREAS, The special meeting of the DRBC scheduled for 9 November 21, 2011, to consider adoption of draft natural gas development regulations was postponed and to date has created the appearance of being postponed indefinitely; and

WHEREAS, The inaction-based moratorium on natural gas development has exceeded a reasonable time period and, because of such, has caused irreparable economic harm to those who entered into good faith leasing agreements with natural gas developers; and

WHEREAS, As articulated and clarified in their May 8, 2013, press release titled “SRBC Staying In Its Lane, Study Water Quantity,” the Susquehanna River Basin Commission’s purpose and objective is to remain in the agency’s lane of expertise. The SRBC states; “when a regulatory agency chooses to stray out of its lane of expertise and mission, it can have profound programmatic and legal consequences. Most important, however, I believe it does the public a disservice”; and

WHEREAS, The residents and property owners in the Commonwealth have suffered and continue to suffer from the disservice that is a consequence of inaction on behalf of the DRBC; and

WHEREAS, The DRBC should follow a similar regulatory path as the Susquehanna River Basin Commission and focus on its mission as a water management agency to assure the long-term balance between healthy ecosystems and economic vitality; and

WHEREAS, The DRBC should abandon any proposed plans to regulate natural gas drilling beyond the already established functions that focus on water quantity and water quality data collection and analysis; therefore be it

Editor’s Note: I, too, applaud Jonathan Fritz for the leadership he’s showing with this resolution. This is what needs to happen; sustained challenges to the DRBC’s reckless hijacking of Pennsylvania’s sovereignty as a Commonwealth. Most pols would have simply given us lip service in person and done little or nothing else. Jonathan put his name on the line with his colleagues and took a stand.

Moreover, he did it in a very smart way by raising the issue of the SRBC/DRBC double standards. How can the majority of the DRBC that also represents a majority of the SRBC pretend it doesn’t have all the evidence it needs that fracking is safe when it’s sitting on it? How is that what’s good for the SRBC region isn’t good enough for the DRBC? Where does the DRBC get its supposed authority if the SRBC, based on a very similar compact, claims it lacks such authority? Why is the SRBC committed to “stay in its lane” as the DRBC once did, but the same members, when they put on their DRBC hats, suddenly veer off the highway and plow new paths into the wilderness of statism?

There’s something very rotten going on at the DRBC even though its mostly the same people as the SRBC. Why is that? Why is Pennsylvania Governor Tom Wolf catering to New Yorkers and not his fellow Pennsylvanians? Why is Steve Tambini, a non-ideological engineer by training, also falling in line with policies he knows are purely ideological and political? It’s as if Carol Collier is still running the place in absentia. Perhaps that’s because she is; as the agent of the Haas family for whom she now works, alongside the Delaware Riverkeeper and myriad other William Penn Foundation shill organizations putting political pressure on the spineless political hacks who are the DRBC.

Here’s what Jonathan says we can all do to help:

Send a letter or email to the DRBC and Gov. Wolf. They need to hear from the constituents that they’ve wronged with this decision. Emails will work also. Phone calls to DRBC and the Governor will work, but they often don’t get documented on the receiving end, hence, they are the least helpful of your contact options.  Letters to the editors of local newspapers are also very helpful.