The Energy Information Administration says renewables will, by 2050, still only meet 7% of U.S. energy needs despite the hype and Green New Deal fantasies.

The Energy Information Administration (EIA) just released its Annual Energy Outlook (AEO) 2019, which shows renewables garnering an increasing share of the electricity generation market through 2050, but only contributing a small amount to total primary energy supply. In fact, solar and wind only supply 7 percent of total primary energy needs in 2050—up from 3 percent today—despite providing 23 percent of electric generation in 2050 compared to 8 percent today.

The AEO 2019 projects total renewables (solar, wind, hydroelectric, geothermal, and biomass) to be 31 percent of generation by 2050. As a result, fossil fuels still supply 78 percent of U.S. energy needs in 2050—down from 80 percent today.

The Outlook clearly indicates that the Green New Deal is not feasible without major policy changes, for it requires 100-percent renewables in the generating sector in just 10 years. The last election and follow-up polls show that most Americans do not want to pay much to reduce greenhouse gas emissions. The polls show them wanting to do something, until they find out they have to pay for it and change their lifestyle.

Other highlights of the AEO 2019 include: 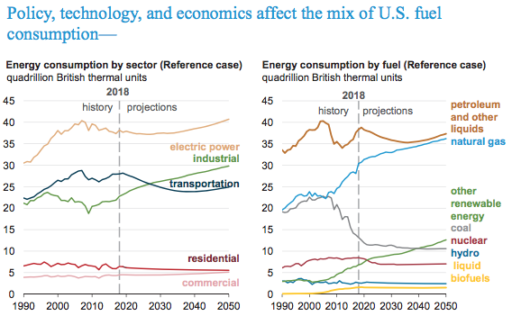 Assumptions of declining costs and improving performance make wind and solar increasingly competitive compared with other renewable resources in AEO 2019, despite their intermittent nature. Most of the wind generation increase is expected to occur in the near term, when new projects enter service ahead of the expiration of the federal Production Tax Credit. Solar generation growth continues beyond the phase down of the solar Investment Tax Credit after 2024 because EIA assumes the costs for solar continue to fall faster than for other sources.

This forecast reflects the growing evidence that the United States has become a global energy superpower, and will be so for many years into the future. Americans who have spent decades worrying about energy insecurity now have only to worry about whether anti-energy government policies will cloud that future.

1 thought on “Renewables May Grow, But Not Much in Terms of U.S. Energy Needs”