Market-distorting renewable energy subsidies, according to the Energy Information Administration, dwarf those allocated to oil, gas and other fossil fuels.

At the request of the Secretary of Energy, the Energy Information Administration (EIA), an independent agency of the U.S. Department of Energy, evaluated the subsidies that the federal government provided energy producers for fiscal year 2016, updating a study that it did for fiscal years 2013 and 2010. Federal subsidies to support renewable energy in fiscal year 2016 totaled $6.682 billion (2016 dollars), while those for fossil energy totaled $489 million—renewables subsidies were higher by almost a factor of 14. The EIA noted that those subsidies do not include state and local subsidies, mandates, or incentives that in many cases are quite substantial, especially for renewable energy sources. 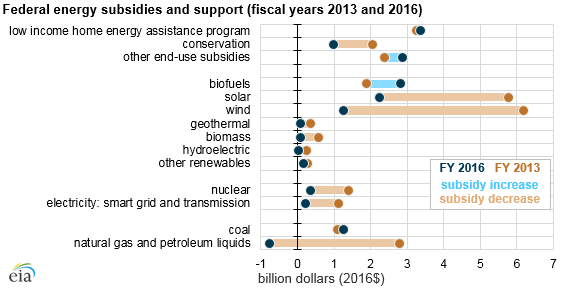 EIA found that most federal subsidies in FY 2016 support renewable energy supplies (primarily biofuels, wind, and solar) and reducing energy consumption through energy efficiency. In FY 2016, 45 percent of federal energy subsidies were associated with renewable energy and 42 percent were associated with energy end uses (e.g., Low Income Heating Assistance and other such programs). Energy end-use and conservation subsidies declined from $7.7 billion in FY 2013 to $7.2 billion in FY 2016.

Despite renewable energy receiving almost half the federal subsidies, EIA reported that fossil energy in the form of coal, oil, natural gas and natural gas plant liquids made up 78.1 percent of primary energy production in FY 2016. Nuclear power contributed 10 percent, followed by biomass at 5.9 percent, hydroelectric at 2.9 percent, wind at 2.4 percent, solar at 0.6 percent, and geothermal at 0.2 percent.

Federal subsidies and support for fossil fuels decreased from about $3.9 billion in FY 2013 to $489 million in FY 2016. Subsidies for coal slightly increased, while subsidies for natural gas and petroleum liquids decreased. In FY 2016, certain tax provisions related to oil and natural gas yielded positive revenue flow for the government, resulting in a negative net subsidy of $773 million for oil and natural gas, based on estimates from the U.S. Department of Treasury.

Among renewable technologies, biofuels received the only incremental increase in FY 2016 subsidy support because of greater U.S. biomass-based diesel production and foreign imports of these products that resulted in an approximately $1 billion increase in tax credits from FY 2013 levels. 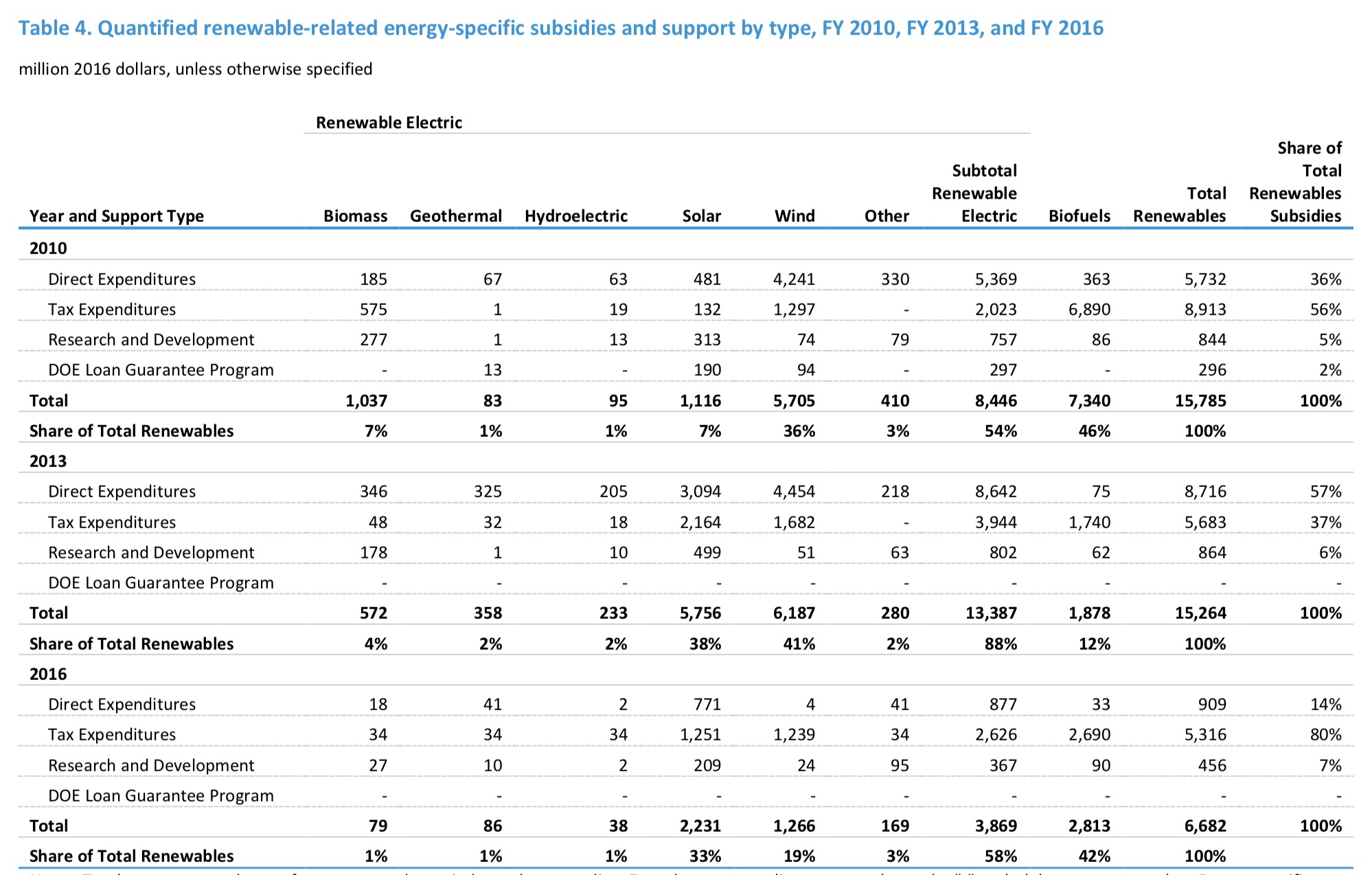 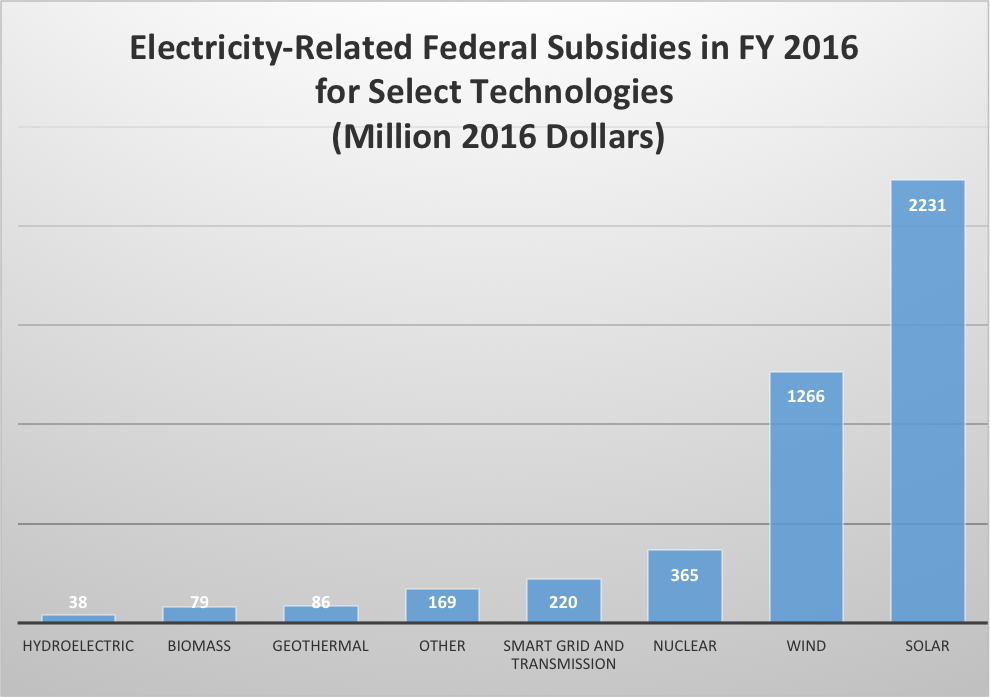 The figure below provides the subsidy costs per unit of production for those technologies that EIA provided relevant data. 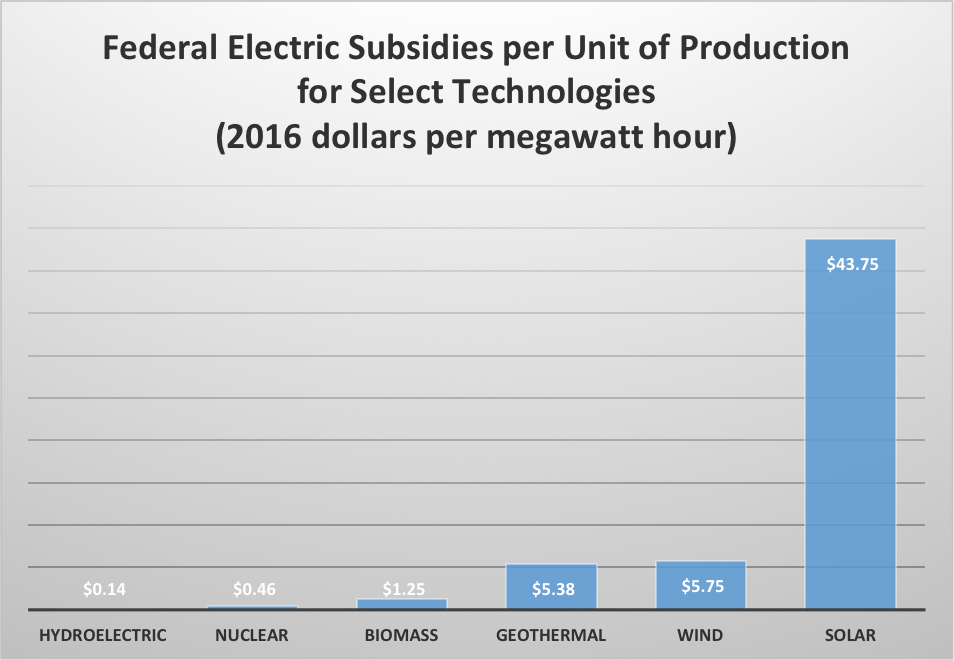 EIA’s report shows that on a total dollar basis and on a unit of production basis, solar energy had the highest federal electricity-related subsidy in FY 2016. In terms of all subsidies and sources, renewable energy and end-uses had the largest subsidies. In general, total federal subsidies for energy declined by almost 50 percent between FY 2013 and FY 2016.

Editor’s Note: I am opposed to all subsidies of any kind, but look at the subsidy cost of solar energy compared to everything else and especially, in the first chart at the top of the page, to natural gas and petroleum liquids, which actually went negative in 2016. Solar energy is a total ripoff with respect to both ratepayers and taxpayers. It isn’t even remotely close to competing with gas despite hyped claims to the contrary.