Green energy fanatics keep telling us renewables are coming cost competitive but the cost advantage of natural gas continues to be insurmountable for them.

A week rarely goes by at the EIA’s Today on Energy blog without some wonderful news on the cost advantage of natural gas. Yesterday’s post is a perfect example. The title, “Average U.S. construction costs for solar and wind continued to fall in 2016,” leads one to briefly suppose the green energy fanatics might have a point; that costs of renewables are getting cheaper and it’s only a matter of time before the green energy future arrives. That will, perhaps, someday become reality, but the cost advantage of natural gas is nowhere near being wiped out, let alone seriously being seriously challenged.

Like all Today In Energy posts, this one by Ray Chen is simply an unbiased recitation of the facts. Even the title, though slightly misleading for reasons I get into below, is accurate. Those construction costs are coming down on a per kilowatt basis, while the average cost of natural gas generation has gone the other way. Nonetheless, that’s anything but the whole story.

The following chart shows what’s happening at a glance: 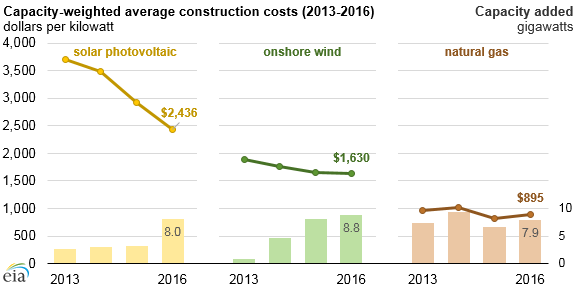 A quick look at this chart reveals the progress of renewables with respect to construction costs. It is, indeed, significant and there was actually more solar and wind electrical generation capacity added in 2016 than natural gas. But, only a knave can ignore the following points, which are, in the end, determinative:

The last point is one illustrated in the article itself, when it discusses different types of natural gas fueled generation (emphasis added): 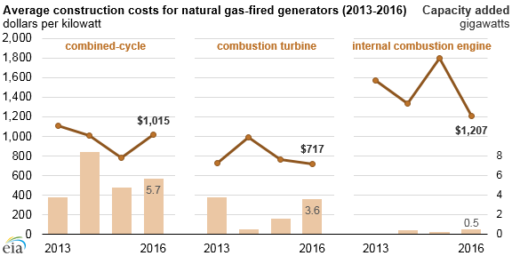 This is reflection of the capacity factor that works completely against solar and wind. Solar construction costs per kilowatt are something on the order of four times as natural gas (not to mention many times more land-consuming). Solar is theoretically cheaper to operate, of course, but overcoming the capital costs alone is  huge burden.

Add in the costs of dealing with energy we don’t need, and providing backup to ensure we have it when we do it need it, and it quickly becomes obvious solar and wind cannot, for the foreseeable future, ever compete with the cost advantage of natural gas. It simply isn’t there and the only thing that sustains the dreams of green energy fanatics are the subsidies stolen out of our wallets by greedy pandering politicians. Yes, Governor Corruptocrat, I’m talking about you.

One thought on “The Remarkable Cost Advantage of Natural Gas vs. Renewables”