An anti-fracking rally in Albany yesterday was just more of the same as ideologues from areas without natural gas (including some from other states) tried to make some noise yet again but the real story may have been the guy in green who just happens to be husband of EPA Region 2 Administrator Judith Enck.

Things going on in Washington these days are raising all sorts of questions of propriety, particularly at the EPA.  Freedom of Information Act (FOIA) requests have been routinely ignored.  Lisa Jackson interacted with trusted friends and associates with others using a fake e-mail account under the name Richard Windsor that wouldn’t be subject to FOIA requests.  EPA also appears to have coordinated its decision to get involved in Dimock with Josh Fox, of all people.  Fox was involved in the EPA’s Parker County fiasco as well. There is, too, evidence the Region 3 EPA office allied with EarthJustice to try and scotch the Marc-1 Pipeline.

Now comes another outrage as Mark Dunlea, husband of Region 2 EPA Administrator Judith Enck, shows up at an anti-fracking rally in Albany.  He’s right there in the thick of it, protesting the science his wife’s agency is supposed to be studying.

Mark Dunlea is a predictable sort of fellow – always guaranteed to show up on the left side of things.  He’s a member of the New York State Green Party’s Executive Committee, after all, and this picture shows him at the rally yesterday proudly taking in the anti-fracking crooning, all while holding up the banner of the party (he’s the one with the purple shirt on the right). 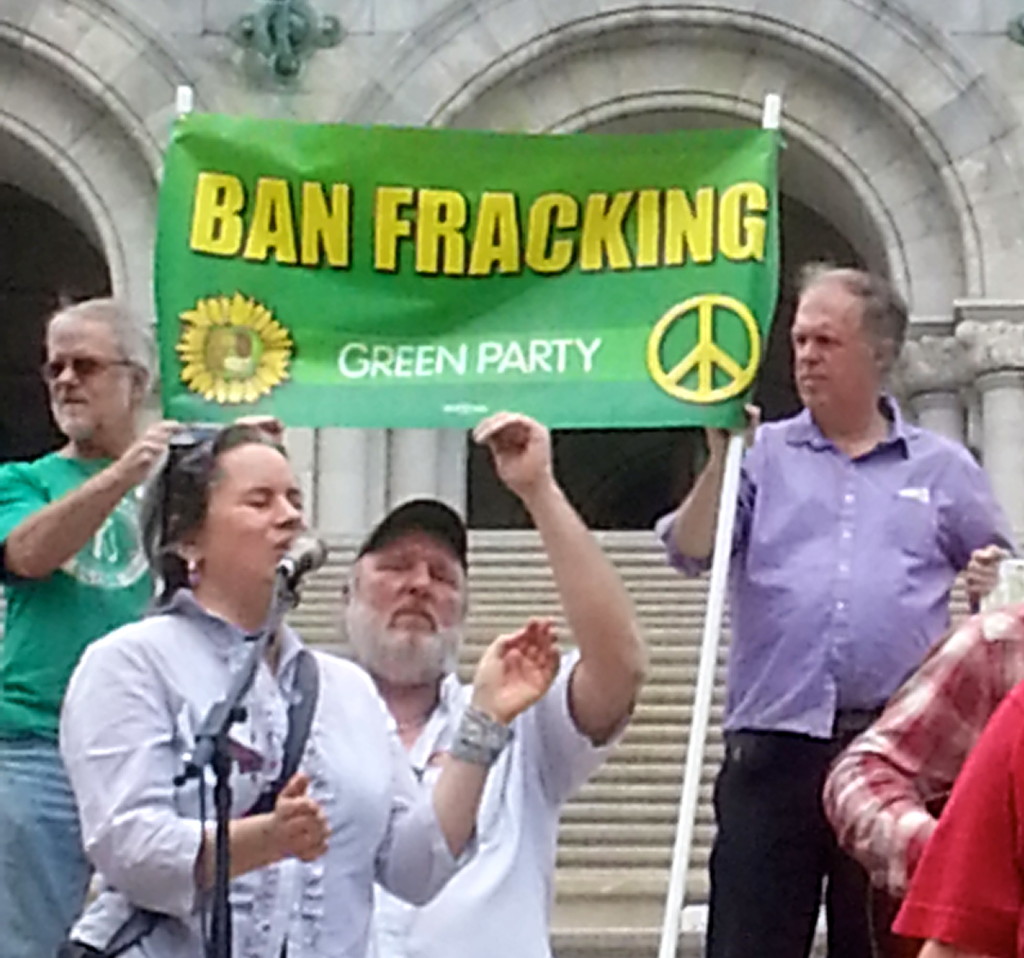 Dunlea doesn’t give up his Constitutional rights to speak out just because his wife takes a job with government, of course, and he has been fairly outspoken in criticism of President Obama, writing this back in October (just before the election):

“Obama has not only failed to provide leadership on international action on climate change but has continued the Clinton-Bush approach of being the major impediment to such progress.”

He also complains that “Obama has promoted the hydrofracking of natural gas, ignoring the public health concerns about the technology, such as air and water pollution.”  Yet, one has to wonder about the propriety of a husband and wife team that works the issues from both sides.

His wife (see photo to right) is of a similar ilk, having worked for the New York Public Interest Research Group (rainmaker for trial lawyers) and previously headed the Environmental Advocates of New York, a prominent group opposed to natural gas development.

Enck has real responsibilities now, though, as EPA Region 2 Administrator and those include such things as commenting on proposed state environmental policies.  EPA Region 2, under her leadership, submitted a full 26 pages of comments on the New York State Department of Environmental Conservation’s draft Supplemental Generic Environmental Impact Statement (SGEIS), for example.  Readers of the EID Marcellus blog may recall I took a look at those comments about a year ago and found them more political than science-based.

So, one-half of the Enck-Dunlea team is supposedly offering objective comments on hydraulic fracturing regulations while the other is out there (way out there, as it turns out) protesting the process itself.  Something stinks about that.  It is hardly illegal but Federal employees standards of conduct include “a prohibition against engaging in outside activities that conflict with employees’ official duties” and the fact it is your husband doing it and not you is hardly reassuring for anyone seeking blind justice.

The Federal standards of conduct may not address the situation directly but there is  a corollary from no less a source than the bible of the left – the New York Times.  Here’s what it advises its journalists:

“Staff members must be sensitive that direct political activity by their spouses, family or household members, such as running for office or managing a campaign – even while proper – may well create conflicts of interest or the appearance of conflicts. Even limited participation, like giving money or ringing doorbells, may stir suspicions of political bias if it becomes conspicuous. Staff members and their families should be wary of ambiguity. A bumper sticker on the family car or a campaign sign on the lawn may be misread as the journalist’s, no manner who in the household actually placed it. When a spouse or companion makes a campaign contribution, it is wise to avoid writing the check on a joint account.”

Now, Judith Enck is not a journalist but, if the Times doesn’t set the appropriate standard, who does?  Certainly, Enck, whenever her agency is interacting with the State of New York on the subject of hydraulic fracturing regulations, ought to be disclosing her husband’s political activity on that front and, perhaps, even recusing herself from the matter.  As for Mark Dunlea, well, he has no such obligations, but one would think he might think twice about putting his wife in such an uncomfortable position.  Why kind of holier than thou individual puts himself out front on environmental issues his wife has responsibility to regulate?  The answer seems to be self-evident.