The Empire Energy Forum’s video of Bradford County Commissioner gets some more love from one of our favorite guest bloggers, Cherie Messore.

What does economic prosperity look like? If you’re Bradford County Commissioner Doug McLinko, it looks like sprawling farmland and rolling green hills. It’s also a revitalized region where 20-somethings stay (or return) to launch their careers. This place has plenty of good drinking water, great roads, plenty of J-O-B-S, and no more county debt. And there are plenty of producing natural gas wells.

McLinko (no stranger to this blog and other pro-development conversations), in this new video released by the Empire Energy Forum, takes viewers on a “pick up truck” tour of his beloved homeland, with plenty of good news to share along the way.

Natural gas development, he says, has “been a blessing to our community.”  Bradford County is the most drilled state in Pennsylvania (2,500 permits have been issued, with 1,900 wells already drilled): in other words, if anything devastating were to have happened, it would have happened there. But guess what? The community is environmentally, physically, and socially safe…and thriving.

He says the good news and truth about energy development is that there is nothing to hide.

And there is plenty of good news to share. The influx of cash into the county means a $17 million first responder training center will be constructed. Projects like this protect the entire community, including more than 130 miles of interstate pipelines, the 1,000 miles of gathering lines, and 15 gas compressors in the county, all which generate tax dollars. In the past few years, the natural gas industry invested almost $4 million into road improvements. Some folks say that gas companies bring crime and social injustice to town along with big rigs and trucks. McLinko says there’s nothing unusual going on.

While there are always a few bumps in the road when embracing growth and change, they have been minor (and are swiftly and successfully mitigated) compared to the conspicuous, transformative advantages. What can’t be disputed is the $100 million put into the assessed value of thecounty, and $1.5 billion put into the general fund of Pennsylvania, thanks to natural gas development.

This video is a Doug’s-eye-view of vitality in Bradford County. During the ride, we hear Doug’s good words about the multiple revenue generating opportunities that came to the county because of natural gas development. “People don’t think about the benefits,” he says. But he sees them, both in the “coffers of a cash-strapped state government” from an industry that pays plentiful taxes and landowners who are collecting royalties from their mineral-rich land. 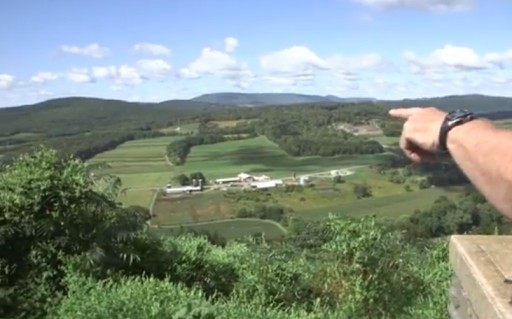 There are new roofs on homes and barns, and plenty of locals who are shopping for supplies in area stores (both big boxes and mom-and-pop). There are new indirect businesses popping up, too, and while some small businesses have a short life, (50-percent of small businesses last at least five years, according to a 2013 article in Forbes), many of them are doing well. Says McLinko, “People who are innovative and creative can find or develop a business here.”

What’s missing? Community degradation, scars on the land, harm to the water, and the sense of despair that plagues communities with economic uncertainty and a bleak future.

McLinko is full of optimism for his beloved home county and our country’s future, too. He says, “The good-ol American system will produce alternative energies for the future, and we need to have a full scale plan in place. It starts with American natural gas to develop and use responsibly.”

In other words, New York, look across the border: the solutions to our immediate financial problems are literally underfoot.

12 thoughts on “What Does Prosperity Look Like? Look at Bradford County.”