The lessons of Economics 101 never seem to be learned, especially when it comes to subjects of natural gas and propane exports.

A fellow by the name of Andrew Dickson White wrote a book 110 years with the absolutely wonderful title of “Seven Great Statesman in the Warfare of Humanity with Unreason,” a collection of short biographies, including one of Anne Robert Jacques Turgot, a French philosopher in the mid-1700s. He provides a rebuttal to something I just read, believe it or not, in LPGas Magazine regarding the supposed threat to LPG retailers from propane experts.

I’ll address Turgot’s insight in a moment but, first, let’s look at what the LPGas Magazine has to say, remembering that it is a journal targeted at propane retailers. The title, revealingly enough, is “Retail Propane Faces Competition from Export Market.” The article is long and jumbled, but here are the key parts (emphasis added):

U.S. propane exports averaged 1.2 million barrels per day (bpd) in the first half of 2020, a 17 percent increase from the same period in 2019, according to the U.S. Energy Information Administration. Based on what Jeff Thompson of Propane Resources sees happening in the market, the environment for propane retailers isn’t going to change anytime soon.

“The Chinese market is going to start heating up as we head into 2021,” says Thompson, a supply and risk management consultant, in an email to LP Gas. “More facilities and units in China are going to need NGLs. This will keep the U.S. export [market] robust.

“At the end of the day, it will be about availability and profitability,” he adds. “This should put the U.S. in the mix for a very active export market over the next few years. Looking at all the export facilities built or facilities fitted for export, there is no reason to believe that exports will be slowing down anytime soon.”

Prominent propane export terminals have come online in the past couple of years, pulling product from domestic supply sources and lessening the surpluses that were once available to the retail market.

In the East, Energy Transfer’s Mariner East 2 pipeline launched in 2019 to serve as an outlet for Marcellus and Utica product exports from Marcus Hook, Pennsylvania. Ironically, Buss says, the efforts to bring the pipeline online in Pennsylvania were not made to benefit Keystone State retailers necessarily – but instead were designed to spur propane exports.

It’s not hard to see what the retailers are thinking; that propane exports deprive them of cheap gas to retail at good prices. That is to say, they are worried about losing an inexpensive supply to foreign buyers willing to pay more. We have heard this argument before. Indeed, the Obama administration put out a report in 2012 that said the same thing about natural gas exports in a 2012 report titled “Effect of Increased Natural Gas Exports on Domestic Energy Markets.” It is the epitome of failed projections. This excerpt serves to explain:

Due to higher prices, the electric power sector primarily shifts to coal-fired generation, and secondarily to renewable sources, though there is some decrease in total generation due to the higher price of natural gas.

We are, of course, eight years later, seeing production way up over 2012, exports growing, prices of natural gas at crazy low levels and coal generation declining as inexpensive natural gas has replaced it. All this is exactly the opposite of what was projected. Yet, here we are with propane retailers obsessing over the same stupid economic theories as the Obama folks did in 2012.

Economics 101 taught most of us that supply and demand are always reflected in price, so here is what has happened with Pennsylvania’s residential propane prices over the last three years as U.S. Propane Exports (including propylene) have gone up 20%: 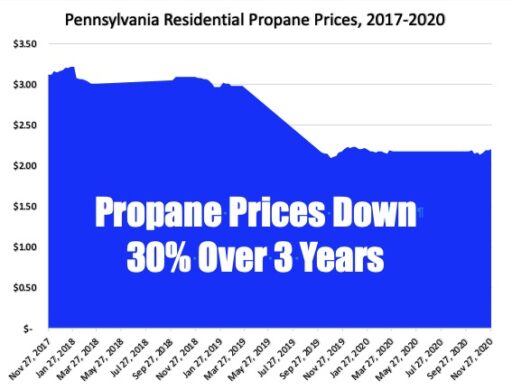 Propane prices have down 30% (from $3.12 to $2.20) as propane exports have gone up 20%. This tells us there is plenty of supply for everyone. It also reveals the concern of retailers is not so much supply as price. It seems they would like to slow exports and discourage them. This brings us back to Turgot and his accomplishments breaking down trade barriers with respect to grain, which benefitted everyone:

To break down such barriers as these, Turgot exerted  himself to the utmost; and, in logical connection with  these efforts, he obtained in 1763 a declaration from the  king permitting free trade in grain, followed during the  next year by another edict to the same purpose. In
thus declaring against an internal protective system, especially as regards agriculture, he braved a deep-seated  public opinion. Every province insisted that, when Heaven had given it a good crop, it should have the main enjoyment of that crop, and that, whether crops were good or bad, the only safety from famine was in the  existing system of ” protection.”

To educate public opinion, Turgot wrote, in 1764, his  Letters on Free Trade in Grain. They were mainly prepared during official journeys, and dashed off at country  inns. It was a hard struggle. Of all things done by him during the Limoges period these letters and the effort to put their ideas into practice brought upon him the most bitter opposition. From the Abbe Terray down  to the people who suffered most by the old order of  things, all attacked him. There came mobs and forcible suppression of them. But Turgot, braving the bitter opposition both of theorists and of mobs, insisted that the consecrated system of interfering with the free circulation of grain throughout the kingdom was one of the greatest causes of popular suffering; and while this argument of his had but a temporary effect at that period, it  afterward did more than anything else to prepare the French mind for the final breaking up of that whole system of internal protection — with the result that famines disappeared from France forever.

So, we see there truly is nothing new under the sun. The arguments made against propane exports are the same ones made against grain exports in the mid-1700s and they are dealy arguments.

2 thoughts on “Propane Exports Help Grow the Supply; Why Is This So Hard to Grasp?”