Even though he had little to do with it and no one wants to admit it, natural gas is the reason for lower emissions, nothing else comes close.

If there’s one thing all environmental groups say they want it is green energy: energy that is sustainable, safe, and can help reduce the world’s greenhouse gas emissions. None of us disagree, as we all want a clean world in which to raise our children and grandchildren. Our activist friends, though, are willing to go far above and beyond reason to spread their message. Their connection with reality is suspect.

November is around the corner and soon the American population will cast their votes for that candidate they believe should be next in the Oval Office. I, for one, cannot wait. I am completely over this election coverage and hearing day in and day out about who never leaves the house without hot sauce, who ate Kentucky Fried Chicken on their personal jet with a fork and the differences in Aleppo and Alpo.

NaturalGasNow has covered many aspects of the campaign and where the candidates have stood (or now stand after some contributions). These past eight years, though, President Barack Obama has had the football (literally in the case of nuclear codes). That is where I want to focus. 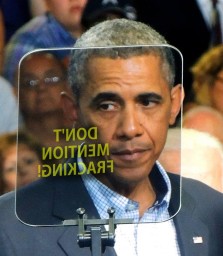 Edited photo from “No Fracking Way” by Wendy Lynn Lee (edited by William Huston) illustrating that even fractivists give no fracking credit to President Obama – click photo for their views.

When President Obama packs up to leave the White House, one thing he is going to leave is a renewed interest on climate. We can argue the merits of climate change all day, but for what it’s worth, the idea of climate change has driven a lot of focus on natural gas. Obama has tried and failed on many fronts to address dependency on foreign energy. We all know how successful Solyndra was and Cash for Clunkers only provided a test for how much people really wanted a new car. Nonetheless, his record leaving the White House is going to show U.S. carbon emissions are down 12 percent since 2005, sulfur dioxide emissions have decreased 57 percent, and nitrogen oxide emissions have decreased 19 percent.

By the time you are reading this paragraph, some of you are shaking head and screaming that I am a bleeding heart liberal. Hold your horses. His successes to lower emissions reductions were accidental and via executive power overreach. Policies unfolded by his administration did not have the intended affect, but by accident led the way for natural gas to become king. Die hard activists and anti-gas types refuse to acknowledge this, but claim the reductions came from renewables and nuclear. Nothing could be further from the truth.

In fact, the Associated Press wrote about Obama’s energy legacy. While they quoted him saying “the investments that we made to allow for incredible innovation in clean energy” when entering into an agreement with Chinese President Xi Jinping, the AP conveniently skipped over natural gas in their list of bullet points.

Oren Cass over at the National Review summed up the AP’s article quite well. While everyone is downplaying the affect natural gas had on saving the world, he clearly reminds us that natural gas and new technologies in fracking and horizontal drill is saving us:

Nuclear power consumption actually declined between 2008 and 2015. (It grew during the Bush administration.) Wind and solar power consumption increased by only 1.6 quadrillion BTUs, or less than 2 percent of the total American energy mix. (Its growth rate was higher during the Bush administration, albeit from a much lower base.)

What we are really looking at when it comes to the President’s legacy is that he didn’t get in the way of natural gas and even sometimes quasi-endorsed it. His overreaching on the Clean Power Plan also helped. While many activists are stopping their feet in a tantrum that coal was being dominated by gas and not solar, they should really be glad that there was another alternative.

Environmentalists and Bernie supporters constantly complain about rich millionaires in the oil and gas industries. Would they really be happier if they were replaced by rich millionaires in the wind and solar industries that became that rich by ways of our tax dollars? Would they be happy that large wind farms are being outsourced to overseas contractors? Regardless of your political affiliation, natural gas is U.S.A. all the way and even though they hate to admit it, it’s saving our earth.

2 thoughts on “President Obama’s Climate Legacy: Thanks to Fracking”