Plastic bans are nothing but feel good symbolism that lack any substance whatsoever. They represent token expressions of secular green virtues, nothing more.

Canadian Prime Minister Trudeau recently proposed a federal ban on certain single-use plastics, arguing, “We have a responsibility to work with our partners to reduce plastic pollution, protect the environment, and create jobs and grow our economy.” As with similar measures in California, Hawaii, and New York, the proposed Canadian ban on plastics will harm consumers while providing very little benefit, even on Trudeau’s own terms. 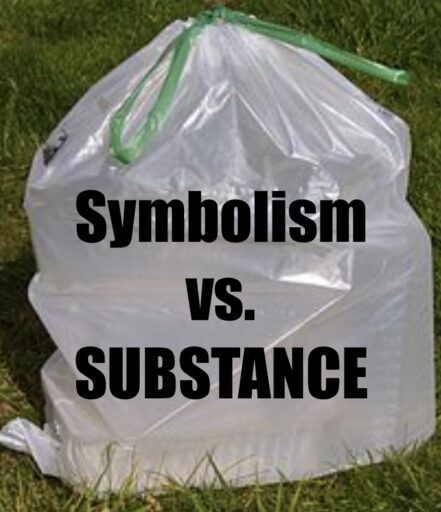 The biggest problem for the plastic banners is that their measures (so far) apply to jurisdictions that have little to do with the ostensible problem. The biggest contributors to plastic in the ocean are China and Indonesia; a 2015 article in Science concluded that OECD countries contribute less than 5 percent of the plastic waste from land sources.

Another problem is that government bans come with unintended consequences. For example, research from earlier this year studied California’s ban on plastic bags and reported that “the elimination of 40 million pounds of plastic carryout bags [was] offset by a 12 million pound increase in trash bag purchases.” Because pet owners (for example) had been using their plastic bags from the grocery store to pick up after their animals, the ban simply forced them to buy plastic bags the old-fashioned way. Ironically, the California legislation led these people to stop recycling and reusing!

These naïve “direct assaults” on one environmental concern can also impede progress on other fronts. For example, if a store switches back to paper bags then this will mean more carbon dioxide emissions. Indeed, a 2011 UK government study found a consumer would need to use an allegedly “environmentally responsible” cotton tote bag 131 times in order for it to cause less environmental damage than the plastic bags it would replace.

Prime Minister Trudeau’s homage to “job creation” is also nonsensical. The rationale of work is that it makes people better off in exchange for our toil. If jobs are being “created” merely to comply with a largely arbitrary government edict, then they are pointless “busy work” of the type assigned in grade school by bored teachers. In a relatively free-market economy with flexible wages, everybody who wants a productive job can get one, especially in the long run. Government bans on plastic, or limitations on greenhouse gas emissions, induce artificial scarcity and “create jobs” in the same way that a ban on power tools would “create work”—and make humanity much poorer in the process.

Now if the benefits from plastic bans are largely illusory, the costs are quite real. For example, restricting single-use plastics such as forks and knives will increase the spread of disease, as people begin reusing metalware for their office lunches etc., rather than throwing out their plastic utensils after each meal. Likewise, if shoppers continue to use the same tote bag for their groceries, eventually they could be transporting their food in rich bacteria colonies, rather than the much more sanitary single-use plastic bags that are promptly discarded.

Yet besides these utilitarian concerns, there is the basic fact that plastic bags are very convenient, and so banning their use will make consumers worse off. After all, there is a reason grocery stores switched away from using paper bags and made plastic bags so ubiquitous. For those with long memories, we can appreciate the extra irony: The stores now switching back to paper bags are using thinner versions than when we were younger. While a strong adult with plastic bags could have carried an entire grocery run into the house in one trip, now with the weak paper bags, several trips are required—and that gallon of milk might rip the bag, so watch out.

The Canadian proposal to ban single-use plastics is yet another triumph of symbolism over substance: The measure will do virtually nothing to reduce plastic waste in the ocean and it won’t “help the economy.” However, what it will do, if enacted, is increase greenhouse gas emissions, increase the spread of disease, and greatly inconvenience consumers.

Editor’s Note: One of our readers writes to direct other readers to this wonderfully relevant link:

One thought on “Plastic Bans Are All About Symbolism Over Substance”