Defendants got caught up in “stupid is as stupid does” stunt on their own side as a Cabot lawsuit against a “pigs to rigs” trial lawyer proceeded last week.

Act IV in the “Pig to Rigs” lawsuit took place last week in the Susquehanna County Courthouse in Montrose, Pennsylvania and, in less than 15 minutes, it revealed everything. County Judge Jason Legg even went to Forrest Gump for an explanation of what he described as a “stupid is as stupid does” stunt he attributed to Ray Kemble, the once plaintiff and now defendant, in the “Pigs to Rigs” lawsuit.

The stunt was bad enough that it caused Kemble’s latest lawyer to temporarily move to withdraw from the case. That was amazing enough but what the Judge probably doesn’t know was this; the stunt appears to have been orchestrated by a fractivist who had all the facts in his possession and knew there was no justification whatsoever for any of Ray’s claims then or now.

Readers will recall how it all started in Act I, when Attorney Charlie Speer and companions representing junkyard plaintiff Ray Kemble filed a lawsuit against Cabot & Oil Gas arguing Kemble’s Dimock well water had been polluted by the company, despite Kemble having previously settled with Cabot.

That was a huge legal no-no and Speer, after getting some free publicity, moved to dismiss his own litigation, probably supposing it would be easy to back away after harassing Cabot a bit. He, in fact, even asked to Cabot to waive its right to seek fees and costs. Cabot, tired of being harassed by people who know better, said “not so fast” and sued for damages, a decidedly refreshing approach. 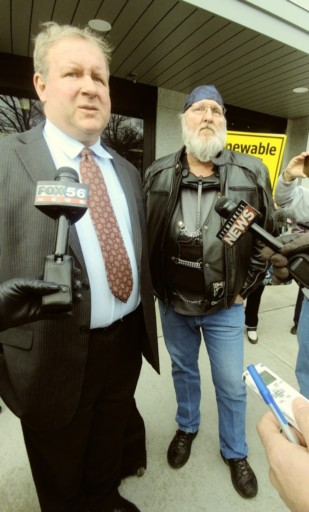 Ray Kemble (with bandana) and his new Attorney Rich Raiders, who shortly thereafter asked to be withdraw from the case, before he decided to stay (Photo by Reggie Sheffield)

Act II was a hoot, as Ray Kemble took to the TV cameras with his new attorney, a dermatology guy by the name of Rich Raiders who got a law license and has been pursuing fractivist cases. Ray talked about having 30 attorneys rejecting his case prior to getting Raiders to work for him and played innocent David vs. Goliath victim, a scenario many members of the media were only too happy to amplify. Most stories, of course, suggested the issue was all about Ray’s contamination complaints but never asked for the data. Virtually none explained the case brought by Attorney Charlie Speer was so bad he moved to dismiss it himself on behalf of Ray.

Last week, the attorneys went back to court, this time to deal with various procedural matters, the most important of which was the request of Rich Raiders, Ray’s new attorney, to withdraw from representing him. The reason? That was Act III, which I wrote about here, not realizing at the time how it would later influence the bizarre Ray Kemble case saga.

I called it a stupid frack trick, as it involved the mailing of some letters to the governor and attorney general “outlining a criminal conspiracy between state and private actors, to poison the air, land, water, and people, since the first horizontal well was drilled 2/20/2006.” A news release announcing the stunt alleged Ray had “suffered complete loss of his property value, property nuisance, harassment, stalking, threats, loss of personal income, a $5M SLAPP suit, and chronic and acute health impacts.”

The three parties involved in this stupid frack trick were; (1) Craig Stevens, previously associated with pig farm suer Charlie Speer and his local counsel, (2) serial protester Bill Huston, who apparently issued the news release, and (3) Ray Kemble, who was already involved in related litigation and hadn’t bothered to tell his attorney, Rich Raiders. Lawyer Raiders, in fact, told the court last week that he first learned of the stunt by getting multiple media requests for comment. One can only imagine his chagrin. He reacted by filing a motion to withdraw from the case.

When Raiders revealed all this to the court last week, Judge Legg reacted by properly noting Ray Kemble should have legal representation, especially given how difficult it had been for him to get anyone to defend him. Legg asked Raiders if he had reached out to Ray. The attorney said he had restarted communication with Kemble after the latter had written him a letter of apology with a promise to never do anything of that sort again. The judge, noting he, too, had received such a letter then dropped his Forrest Gump rhetorical bomb summarizing the situation as “stupid is as stupid does,” which got pretty much everyone’s attention, including that of Bill Huston, who was in the courtroom. 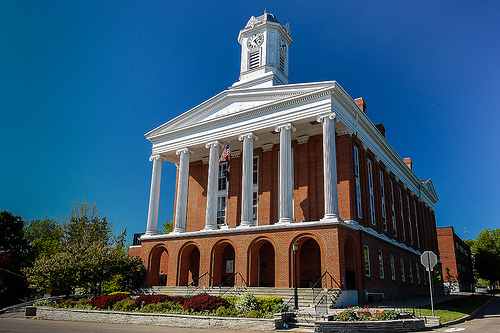 Notwithstanding this, Judge Legg had no idea how accurate his remarks were. The stupidity on display wasn’t so much Ray Kemble’s, though, as it was those of the folks manipulating him. Ray was used, it appears, by Charlie Speer, for example, but he wasn’t the only one. No, Charlie’s sidekick, Craig Stevens, and Bill Huston were apparently right in there, too.

Indeed, at the time Bill Huston was issuing a news release claiming a conspiracy to poison the air, land, water and Ray Kemble, he had copies of correspondence to Ray Kemble from both the Pennsylvania Department of Environmental Protection (DEP) and the Federal Agency for Toxic Substances and Disease Registry (ATSDR) indicating precisely the opposite and he freely published them on his own blog (ingenuously named BillHustonBlog). Perhaps he’ll take them down now, but they were found in this archive “provided as a Public Service” and, more specifically, here and here. Should Bill take them down, they may also be found here and here.

Once you read these letters, both issued in October 16, 2017, several months prior to Kemble, Stevens and Huston doing their stupid frack trick alleging a public conspiracy to poison Ray, you will understand  the extra depths of stupidity Judge Legg didn’t begin to plumb. Read the full correspondence, but consider these excerpts from the ATSDR letter received after much foolish media ado about the agency coming back to Dimock (emphasis added):

During the week of July 31, 2017, the Agency for Toxic Substances and Disease Registry (ATSDR) sampled water in 25 homes in the Dimock area for chemicals, including methane, to determine the quality of the water. At your home, water was tested at the kitchen tap (treated bulk Montrose water), from your pressure tank (raw groundwater) and from your bulk water tank (untreated bulk Montrose water)…

Action levels for methane in water are taken from the U.S. Department of the Interior guidance on methane hazards (please see reference at the end of this letter). Methane detected at a concentration below 10 milligrams per liter (mg/L) does not warrant immediate action except for monitoring the appearance of the water and possibly ventilating the home. Concentrations from 10 mg/L through 28 mg/L are considered to be at a warning level. At this level, additional recommendations include the installation of a combustible gas monitor, ventilation of the home, ventilation ofthe well head, and removal of ignition sources in enclosed areas of the home. Concentrations above 28 mg/L require immediate action, and immediate ventilation of the wellhead is recommended. At this level, treatment of the water to remove methane may be needed.

In your raw well water, methane was found at a concentration of 3.1 mg/L, which is below the warning level of 10 mg/L…

Methane concentrations, in other words, not only fail to represent “poisoning” but don’t even rise to warning levels. This is what might be expected in an area long-known for shallow methane and being able to light water on fire hundreds of years ago in the case of nearby Salt Springs, for example. Moreover, not one of the 25 homes sampled by ATSDR showed methane in the immediate action range, despite all the hype from every corner of the fractivist world and with the help of a sycophant media class reporting from outside the area.

The DEP letter showed even lower methane and two results no doubt directly related to the fact Ray Kemble is not using his well regularly, preferring to be a victim of something and able to produce a bottle of rusty looking water on demand as part of the schtick:

On September 21, 2017, the Department collected samples from your water supply. The samples were submitted to the Department’s laboratory in Harrisburg for analysis. The analytical reports for the samples are included, as well as documents that will assist you with interpreting the sample results.

The sample results showed several compounds elevated above Department standards. Turbidity was present at 1.64 nephelometric turbidity units (NTU) which exceeds the primary maximum contaminant level (MCL) of 1 NTU. Manganese was detected at 0.446 mg/L which exceeded the secondary MCL of 0.05 mg/L. Primary MCLs are intended to reflect potential dangers to human health, while secondary MCLs reflect the aesthetics of the water (i.e. taste, smell, etc.). Additionally, the sample results showed methane is present at 2.03 mg/L in your water supply.

Turbidity is what happens when a well not used regularly is suddenly pumped; the sediments that have accumulated and settled during non-use are stirred up. It’s, therefore, hardly a surprise Ray’s well registered above 1 NTU on the turbidity scale. But, here’s the thing; the EPA Drinking Water Standard for turbidity is actually a range of 1 to 5 NTUs, depending on the filtration used and, in Pennsylvania, the upper threshold for public water systems (which Ray’s well is not) is 2 NTUs.

Likewise, manganese, which is an aesthetic issue rather than a health one, is common in the area (36% of Upper Susquehanna Basin water wells equaled or exceeded recommended limits for manganese in a 1984 study by the USGS). Manganese levels can, too, appear to be elevated where a well is not being regularly purged by water usage, which brings right back to the likely cause for those DEP results in the case of Ray’s well. Regardless, like turbidity, high manganese levels can be easily controlled with filtering.

No, there’s no poisoning whatsoever. Ray Kemble’s well simply needs to be used and perhaps filtered to remove common manganese. The whole thing, from Charlie Speer’s “sorry, i didn’t mean it” lawsuit to the stupid frack trick at the Dimock Post Office, has been one continuous scam perpetrated by folks who do, mostly at least, know better. Some of the  “Pigs to Rigs” gang may be stupid; but, conniving is a more apt description for all of them.