No bigger shale gas outrage can there be than the exploitation of a child suffering from a genetic disease for a phony grass roots campaign against fracking.

We ran a story last week about the fractivist astro-turfing called Phony Grass Roots Anti-Fracking Campaigns Proliferate about how big money funders pay students and others to gin up what appear to be grass roots campaigns but are anything but. That activity is outrageous enough, but an alert reader of this blog recognized picture used in the demagogic photoshopped graphic used with one of the Craigslist ads for the workers. Her discovery proves to be the biggest shale gas outrage of them all.

Here’s a screen shot of the Craigslist ad: 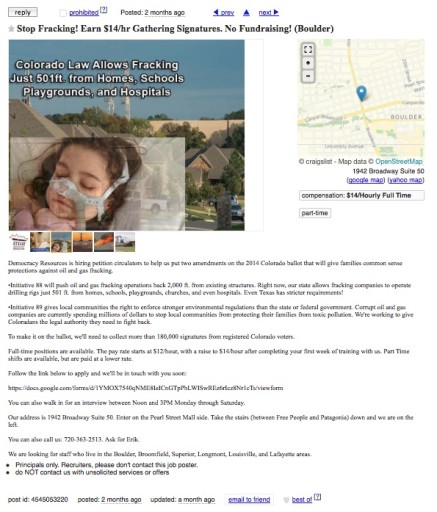 This ad is sponsored by Democracy Resources which, as we noted earlier, is a canvassers and protestors for hire business, presumably hired by Environment America, Clean Water Action or one of the other groups leading this fractivist effort, although it’s not entirely clear given they are a private consulting outfit. They publish a list of clients though that includes fractivist groups such as the League of Conservation Voters (a Rockefeller connected enterprise).

Here’s what’s particularly outrageous about this ad. See the child with the respirator, the one the graphic suggests is an outcome of fracking near homes, schools, playgrounds and hospitals? Well, it turns out Democracy Resources took that picture from a Change.org petition on behalf of Sarah Murnaghan, a Newtown Square, Pennsylvania child suffering from cystic fibrosis and then needing a lung transplant denied by Federal health care policy. Cystic fibrosis is a genetic disease.

It’s hard to imagine a bigger shale gas outrage than using the picture of a child from another state suffering from a life-threatening genetic disease to motivate young students to gather signatures for an an anti-fracking ballot initiative in Colorado. It shocks the conscience and demonstrates the depths of depravity to which some fractivists will go in surrender to their ideology. It’s disgusting and the people to blame are the not so well hidden big money funders of astroturf professionals such as Democracy Resources.

I’m talking about people like the Rockefellers, the Park Foundation, the Energy Foundation, Colorado PIRG and the others who fund outrages much like this on a continuing basis. Whose hands are on this one? We can’t know specifically and that’s just the way they like it, of course. It’s the biggest shale gas outrage of them all. I’m am so sick of these well-financed fractivists without a conscience.

UPDATE: The Washington Free Beacon did more research and found out who funded this outrage. Read the story and learn who was behind this despicable campaign.