Our Pennsylvania Supremes have handed a major defeat to radicals such as the Delaware Povertykeeper on the heavily abused Environmental Rights Amendment.

The Delaware Povertykeeper a/k/a Riverkeeper wasn’t part of this case but, you can be sure there was crying in their natural gas heated offices in Bristol over a recent decision that dealt a serious blow to Environmental Rights Amendment abuse.

Maya Rossum van Rossum has been attempting to leverage the language of the Amendment against the natural gas industry. She even wrote a book about it and has participated in numerous attempts to turn into a tool forcing communities to outlaw natural gas development, including the Gorsline case where some folks that she had scored, although I didn’t. It turns out I was correct, as the Pennsylvania Supremes have completely a similar attempt to claim natural gas development is industrialization that cannot be permitted much of anywhere.

The case was Frederick, et al v. Allegheny Township Zoning Hearing Board and the Commonwealth Court destroyed the appellants’ arguments that Allegheny Township, Westmoreland County had violated their environmental rights under the Pennsylvania Constitution by “industrializing Allegheny Township through natural gas development. I covered it all here. Jim Willis, at Marcellus Drilling News, covered it here and, if you combine our reports you’ll have all the background you need. 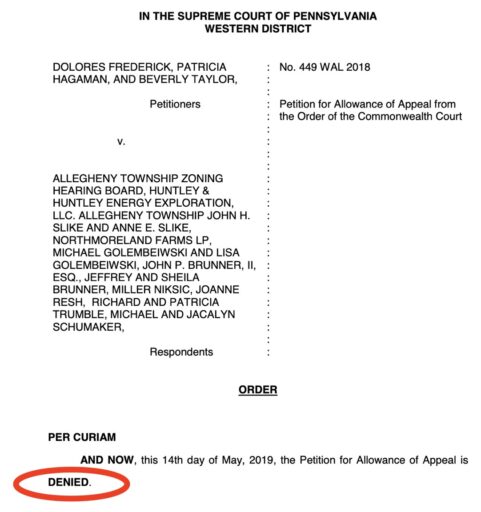 The great thing is that the Pennsylvania Supremes have just refused to take the case on appeal, meaning the Commonwealth Court decision stands! Law and reason have prevailed, even at our highest and very political court. This is a big win.

The Environmental Rights Amendment the Delaware Povertykeeper advanced as their primary povertykeeping tool was rejected as a basis to force communities to disallow natural gas development. The plaintiffs/appellants lost at the Allegheny Township Zoning Hearing Board, lost again at the Allegheny Court of Common Pleas, lost a third time at the Commonwealth Court and got their final due from the Pennsylvania Supremes.

Here’s the Pennsylvania Chamber of Business and Industry response, which I heartily endorse:

We applauded both the outcome and the reasoning of the Commonwealth Court’s majority decision in this case, and we are pleased the Supreme Court has allowed that decision to stand. This decision provides greater certainty to job creators looking to invest, operate and expand in the Commonwealth, and clarifies the roles of local and state government with respect to environmental regulation.

As we noted previously, the Commonwealth Court agreed with the PA Chamber’s brief in recognizing that the Environmental Rights Amendment does not trump property rights – including the right to make reasonable use of private property.  The court also agreed with the PA Chamber that the ERA does not impose a mandatory obligation on government to zone. The court made clear that the legislature gave the power to regulate environmental impacts to DEP and other state agencies, not municipalities. Further, the opinion adopted a key theme of the Chamber’s brief: government agencies may not rely on the Environmental Rights Amendment as justification for acting beyond the scope of their statutory authority.

To be clear, tremendous strides have been made with respect to improving air and water quality over the past several decades, as Pennsylvania has made greater use of its abundant natural resources – including nuclear, coal, oil, gas, wind, solar and other renewables. Our members remain committed to ensuring this progress continues; a key part of this sustained progress is ensuring that state and federal law is implemented in a reasonable manner. This decision should provide further foundation for both the aim and limit of government agencies exercising their statutorily defined powers.

Amen! Let’s just hope there isn’t a successful appeal for the entire court to reconsider.