The Pennsylvania Manufacturers Association has put the numbers together and HB 1100 would be great tool to rebound from the COVID virus. Will Wolf veto it?

The HB 1100 legislative package is on Tom Wolf’s desk. It would be a fabulous tool for helping the Commonwealth bounce back from the Wuhan COVID virus, but he’s threatened a veto despite overwhelming support in the legislature. Will he do it? Who knows? If he does, though, the Pennsylvania Manufacturers Association says he’ll be throwing away an opportunity to secure almost a billion dollars of new investment at two new manufacturing plants that could, altogether, stimulate the creation of 1,017 jobs, $119.1 million in labor income, $185.7 million in value added and $524.5 million in total economic output every year. 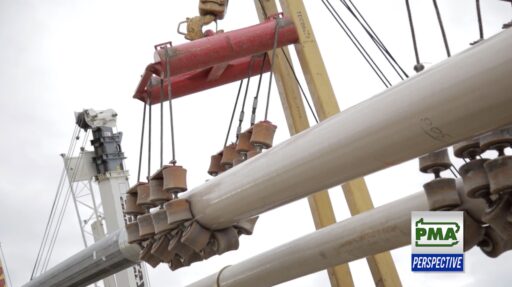 The full Pennsylvania Manufacturers report can be found here.  And, here is the background and executive summary:

Pennsylvania’s energy opportunity continues to drive innovation and revitalize economies in the areas of the commonwealth that often need it the most. In Beaver County, Pennsylvania, the largest construction site in North America is underway, supporting 6,500 construction jobs and the manufacturing plant being built will sustain more than 600 manufacturing jobs.

But the ethylene that will be produced from that plant will allow for the clustering of manufacturing industries that rely on that feedstock to produce finished goods. Plastics, rubber goods, coatings, liquid metals, sanitary products, and many life science commodities find their foundational footprint in ethylene. Surely, western Pennsylvania will be a manufacturing hub for generations to come because of the natural gas play, and the resulting manufacturing activity will be because of the availability of natural gas and natural gas liquids.

This same opportunity exists in a slightly different form in northeast Pennsylvania. The possibility of one natural gas synthesis plant locating in northeast Pennsylvania would be a major economic driver, but the fact that there are two projects being explored in different counties would be transformative to the commonwealth’s economy. In this part of the Marcellus formation, the gas is “dry,” meaning it’s almost exclusively methane.

Methane is used in natural gas synthesis manufacturing plants to create hydrogen and nitrogen in the form of ammonia and urea; two essential products in modern manufacturing. These products would be produced in the Clinton County facility. Ammonia in a gas or liquid form is used by industry for petrochemicals, life sciences, and fertilizer in the agricultural industry. Urea is processed into fertilizer and used to manufacture diesel exhaust fluid; a necessary product to reduce NOx emissions.

In Luzerne County, the natural gas synthesis plant will produce methanol. Methanol is used in antifreeze, solvent, fuel, as a denaturant for ethanol, and as a feedstock for biodiesel. This category in NAICS code is referred to as, “other basic organic chemical manufacturing.” While the goods produced by the natural gas synthesis manufacturing plants are manufactured goods themselves, they are the feedstock for many other manufacturing processes and thus, the multiplier effect of these facilities is immense.

As the Manufacturing Institute, the education and workforce arm of the National Association of Manufacturers, reported:

The backward linkage (or multiplier effect) shows how much additional output is generated by a dollar’s worth of final demand for each industry. Every dollar in final sales of manufactured products supports $1.33 in output from other sectors—this is the largest multiplier of any sector. Manufacturing plants, therefore, have a powerful and positive impact on economic development.

Quantifying the economic opportunity is difficult due to the lack of historical data, because this industry does not currently exist in Pennsylvania or in the greater Northeast United States. It’s only because of the recent discovery and extraction of natural gas in the region that this type of industrial activity is even possible.

Once complete, there would be approximately 125 nitrogenous fertilizer manufacturing jobs and 25 natural gas drilling and well maintenance jobs that would be permanent new, full-time employment in Clinton County and the same in Luzerne County, but with 125 “other basic organics chemical manufacturing.”

Based on the findings in this report, the direct, indirect, and induced jobs created by the construction jobs totals 2,229. This represents $301.7 million in labor income, $409.6 million in value added, and $734 million in total economic output over the thirty months of construction completion.

The direct, indirect, and induced jobs created by the sustained manufacturing activity accounts for 1,017 jobs, and $119.1 million in labor income, $185.7 million in value added, spurring $524.5 million in total economic output, per year, not accounting for natural inflation.

Please note, these numbers could be even larger as large industries will surely cluster around the affordable and readily available feedstock for various manufacturing processes. Also note, this study was prepared using information publicly available at the time of completion. Business plans constantly change and the inputs and outputs from these models could be less or more than anticipated in an ever-changing economy.

Overall, these projects would be transformative to northeast Pennsylvania and the commonwealth as a whole. Entire economies are centered around this type of economic activity and will sustain regions for generations to come. Attracting and retaining natural gas synthesis manufacturing ought to be a priority of policymakers at the state and federal level to ensure this prosperity occurs in our commonwealth as opposed to a competitor state.

The summary also includes these tables, generated from an IMPLAN analysis conducted by the Pennsylvania Manufacturers Association: 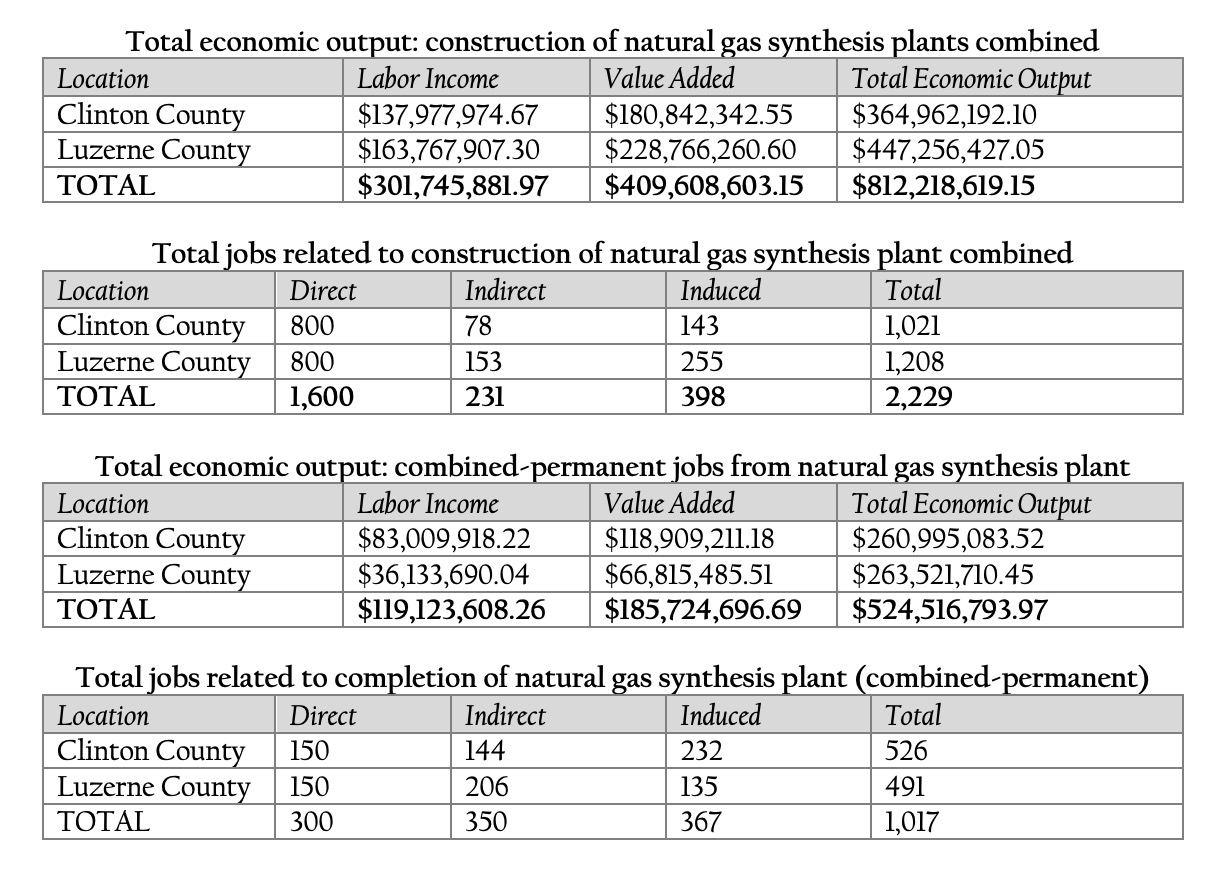 The importance of this data is summed up in an announcement from the Pennsylvania Manufacturers Association:

House Bill 1100 establishes a tax credit for methane manufacturing similar to that of the “Pennsylvania Resource Manufacturing Tax Credit.” The credit is production based, meaning not a cent of tax liability is offset until the project is complete, employees are hired, and product begins to flow from the plant.

The legislation as passed with vast bipartisan support in both the Pennsylvania House and Senate includes provisions that: require a capital investment of at least $450 million to construct the facility and place it into service; the creation of at least 800 full-time jobs construction and/or permanent jobs; the payment of prevailing wage on any construction, reconstruction, demolition, alteration or maintenance of the facility; that a company must make a good faith effort to employ local construction workers; and that a company must purchase and use Pennsylvania natural gas to produce a Pennsylvania manufactured petrochemical product…

House Bill 1100 is currently on Governor Wolf’s desk and action is required by March 28.

So, will Tom Wolf deny the Keystone State this opportunity? That is the question.