This story tells us everything one needs to know about the Wolf Administration and its radical nature. Behind Patrick McDonnell, the mild-mannered Secretary of the Department of Environmental Protection in Harrisburg, is a Pennsylvania DEP Policy Director Jessica Shirley. She spent yesterday afternoon attacking State Representative Scott Perry, calling him an “environmental criminal” and “traitor” while demanding he resign. That wasn’t all, either.

The Policy Office is a highly specialized executive office that works closely with all DEP programs and the Governor’s Office of Policy and Planning. The office is responsible for engaging the public in meaningful dialogue and coordinating the Department’s initiatives through its many advisory committees. The Policy Office also manages the agency’s regulatory development, review and approval process, and is responsible for principal administration of the Environmental Quality Board and Board of Coal Mine Safety.
Jessica also oversees the Office of Pollution Prevention and Energy Assistance (OPPEA), which performs and administers the functions of the Pennsylvania Energy Office. OPPEA works with citizen’s groups, businesses, trade organizations, local governments and communities to help them reduce pollution and save energy. The office works to foster and develop alternative energy solutions.

This a very important position, to say the least; a position demanding a modicum of objectivity and professionalism typically demanded of any public servant. But, Jessica Shirley has worked in state government her entire career, if her LinkedIn profile is to be believed, and she’s clearly come to imagine the public is there to serve her. Indeed, elected officials who are her ostensible bosses, as representatives of the public, appear, in her eyes, as simply worthy targets of her trash-talk. Yesterday, between 2:17 PM and 3:08 PM (was she working at the time?) she posted six tweets in reaction to what was happening in Washington, including these two: 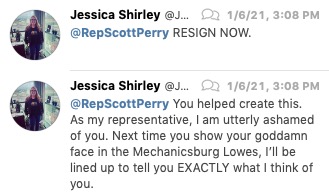 She got more angry as the day wore on and when she woke up this morning she was obviously in a particularly foul mood with respect to her Mechanicsburg neighbor who had earlier explained why he supported delayed certification of Pennsylvania electors: 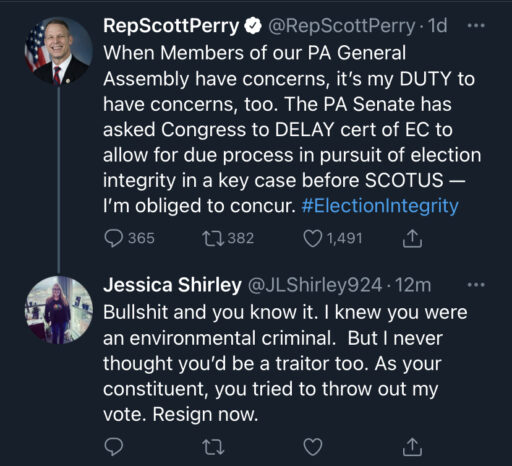 That was at 6:43 AM today. But, she wasn’t done. Five minutes later she went after State Senator Doug Mastriano, who happens to be a retired Army Colonel and PhD historian, and basically labeled him a dummy, which she seems to do with a lot of folks:

She is, she says though, always trying to please Tom Wolf and John Fetterman:

But, it’s tough when she doesn’t get the respect she deserves:

Maybe, just maybe, she’ll get a chance after calling the elected officials she serves environmental criminals and traitors. There are, after all, some Civil Service rules about this sort of thing:

Participate fully in public affairs, except as prohibited by law, in a manner that does not materially compromise efficiency or integrity as an employee or the neutrality, efficiency, or integrity of a Commonwealth agency.

Maybe it’s just me, but I’m guessing that calling elected officials you serve criminals and traitors is not especially neutral or reflective of agency integrity. Perhaps our Pennsylvania DEP Policy Director should take some time off and enjoy a joint or two with John Fetterman and philosophize together about it. Or, get a job in the real world, where no boss would tolerate an employee calling him or her a criminal or traitor and demanding their resignation on their time or anyone else’s.