Pennsylvania DEP is determined to target shale producers with insane methane regulations regardless of the facts and achievements in reducing such emissions.

There is something very weird going at Pennsylvania DEP. The agency is directly targeting the Commonwealth’s shale producers with punishing discriminatory regulations for which there is no rational justification. It’s all about two sets of what are known as General Permit regulations known as GP-5 and GP-5A. Only in the labyrinths of bureaucracy do rules get such arcane labels, of course, which serve to immediately dissuade us commoners from digging deeper. Many have, accordingly, failed to pay attention, but that’s how government gets away with its dirty work.

Fortunately, some people are paying attention and pointing out the absurdity of the proposed regulations. Among them are the principals of an interesting firm known as Silent Majority Strategies, who have made a devastating case against this effort by the Pennsylvania DEP to punish the natural gas industry for what appears to be Wolf administration retribution for not getting the severance tax the governor so ardently desires.

Silent Majority Strategies or SMS “works with the energy industry to provide the public with the facts regarding the benefits of intelligent energy policy and development. SMS also works to dispel misinformation by the opponents to sensible and environmentally responsible public policy,” according to the firm’s LinkedIn page. One of those principals is Mike Krancer, former Pennsylvania DEP Secretary and the other is Keith Naughton, a public policy expert with a PhD from the University of Southern California. Both submitted testimony for a Pennsylvania House of Representatives State Government Committee Hearing “Regarding Burdens, Abuses And Legislative Oversight Of The Regulatory Review Process” regarding the proposed regulations by permit.

Naughton’s testimony frames the major issues from a public policy perspective, focusing on the GP-5A permit requirements, which are particular to shale producers, as opposed to conventional. Here are some of the key points he highlights:

From the limited information available, I believe it is possible – even likely – that the Pennsylvania Department of Environmental Protection’s proposed GP-5A will not only fail to achieve the goal of reducing GHG emissions, but that it may well result in an increase in GHG emissions…

DEP has not has engaged in systematic discussions, i.e. a process of structured engagement that ensures an accurate representation of the relevant stakeholders. Instead, DEP has apparently engaged in an “invitation-only” process for the development of the permit prior to its publication and an ad hoc process during the commenting period…

If DEP’s primary goal is to reduce methane emissions, such a goal should be definitively established, along with quantification of benefits…

Thus, according to EPA, the only quantifiable effects from methane and VOC emissions are as part of the declared harm of global GHG emissions. Such emissions do not respect local, state or national boundaries. A given unit of methane emissions produced in Pennsylvania has the exact same effect as a unit of emissions from Ohio, West Virginia or from foreign sources such as Saudi Arabia, Qatar or Russia…

In order to achieve a net reduction in methane emissions, the proposed GP-5A must not cause a transfer of extraction and production activities from Pennsylvania to other jurisdictions with less regulation or no regulation… Placing Pennsylvania extractors in a disadvantageous position would at best result in no public benefit or, at worst, negative consequences as net emissions increase. The only tangible achievement of poor public policy is in public relations.

The fact is that Pennsylvania producers are in an unfavorable position within the global natural gas market. Any increase in costs or regulatory burden is likely to result in reduced activity with a commensurate increase in other jurisdictions…

It would be an error by DEP to assume that natural gas production in Pennsylvania will increase or not decrease regardless of regulatory action. The fact is that natural gas produced in Pennsylvania sells at a significant discount to gas sourced from other states. The Dominion South Hub price for natural gas (Marcellus-Utica Basin price) has been consistently lower that the national Henry Hub price throughout 2016 and into 2017, with the discount as high as 50%…

Given the fact that natural gas produced in other jurisdictions is able to be sold at much higher prices and that domestic and international supply is increasing, increases in the cost of production for Pennsylvania producers is highly likely to result in reduced activity. Such activity will not result in a net reduction in world production, as supply from other jurisdictions, both domestic and foreign, is more than adequate to satisfy increasing demand. The net result will be reduced investment, jobs and tax revenue, but NO reduction in net natural gas production nor in methane emissions. 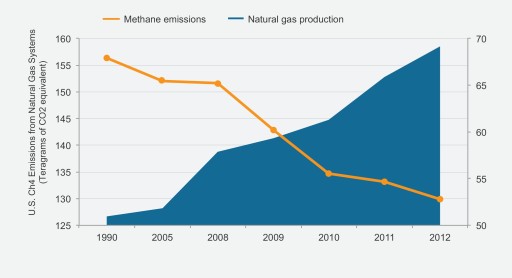 Furthermore, according to EIA carbon dioxide emissions are down 12% since 2005, while US GDP has increased 15% for a net reduction per unit of GDP of 23%. The reduction is primarily due to a shift in the electric power sector toward natural gas (Source: Energy Information Administration). Actions by DEP which would reduce the production of natural gas would thus impede further progress in reducing GHG emissions.

If DEP is truly intent on reducing methane and VOC emissions, it should seek to develop a regulatory framework that would encourage production in Pennsylvania and displace production from potentially low-regulation and high emission jurisdictions.

That’s a compelling argument. It may be summed up by saying methane emissions won’t be reduced any more than they already are and may well, in fact, increase as a result of any policy that discourages Pennsylvania shale gas production, which the GP-5A requirements would certainly do. Put another way, it’s classic “don’t cut off your nose to spite your face.” There is already an abundance of spite in the Wolf administration, of course, over the governor’s failure to get his severance tax, which, perhaps explains this entire maneuver.

Krancer’s testimony is much lengthier and legally focused as one might expect from the former Chief Judge on the Pennsylvania Environmental Hearing Board as well as DEP Secretary. Those who recall him from DEP days know he can be blunt and he lives up to that reputation in his testimony:

The GP-5A is a first time ever pre-construction air permit that would need to be obtained before an unconventional natural gas well was drilled. Indeed, the GP-5A would be required to be in-hand even before a host of preparatory steps are taken such as road clearing to even get to a proposed well site. It would also cover temporary devices such as off-road engines which, by the way, are already intensely regulated as to emissions by federal requirements. The draft GP-5A, which was released in December 2016, is a major revision and departure from current DEP air permitting requirements and, importantly, it covers substance (air emissions and temporary air emissions sources from and on well pads) that is already robustly regulated by a DEP air quality requirements… 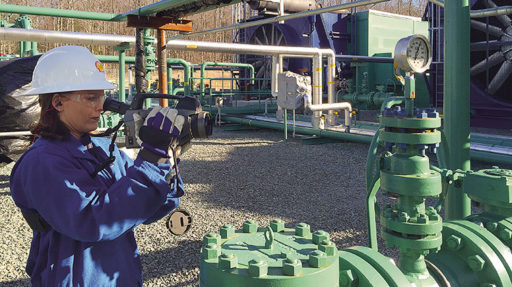 Here is the result on Day 1 after this permit is implemented as now written: (1) an immediate 12 to 18 month moratorium on new and some current Pennsylvania production; and/or (2) an immediate (within weeks of promulgation) shut-in of Pennsylvania current production for wells drilled after August 2013. I think every member of the Committee, and all of your colleagues in the Legislature, would agree with me that the Pennsylvania Legislature ought to have some say in a policy decision of whether to immediately turn off and/or seriously curtail Pennsylvania natural gas production. The far-reaching effects of this new regulation (and I use that term intentionally) is prima facie evidence that the GP-5A should be subject to a thorough independent legislative and executive review…

Also… the GP-5A, which did not go through the statutorily established regulatory process, creates: (1) binding requirements obligatory for the DEP to impose; (2) binding duties and obligations on permittees; and (3) an obligatory system regarding well drilling operations that sets forth conditions precedent and requirements in order to be able to operate a well drilling operation in Pennsylvania. This is regulation-by-permit and Pennsylvania law disallows that.

Krancer then methodically goes through the legal issues surrounding the proposed new methane rules on shale producers, blasting one hole after another in the facade of the Wolf  administration’s spiteful attempt to publish Pennsylvania’s premier economic success of the last decade, the headlines of each section spelling out the fatal weaknesses in DEP’s methane permit regimen:

Simply put, Krancer’s testimony leaves no doubt as to what’s happened here as Pennsylvania DEP has pursued a spiteful attack on the natural gas industry, apparently on behalf of a governor irate over not getting his severance tax. It also leaves no doubt there is a fantastic litigation opportunity here with more than usual consequences for the Commonwealth. Courts don’t much like it when agencies make diametrically opposed legal arguments before them, as has happened with Pennsylvania DEP.

The whole episode suggests to me the direction on this issue is coming not from the DEP professionals or even the current Secretary but directly from an extremely vindictive and pouting Tom Wolf. It’s utterly disgusting if what I surmise from all this is correct but, as the SMS testimony and the title of the hearing (“Regarding Burdens, Abuses And Legislative Oversight Of The Regulatory Review Process”) suggests. this story is far from over. Read both sets of testimony and draw your own conclusions.

5 thoughts on “Why Is Pennsylvania DEP Ignoring Reality on Methane?”