Hardcore PennEast pipelines opponents, all 15+/- of them, gathered yesterday in response to a raised fist Facebook appeal to attend an anti-PennEast rally.

Following their defeat in court last Friday, PennEast opponents used their ReThink Energy Facebook page to urge fellow travelers to attend a rally and “Stand Against PennEast’s Abuse of Eminent Domain.” It was hardly a theme designed to inspire, so how did they signal comrades it was worth attending? By employing the red fist of resistance logo of communist/socialist movements, of course. It worked; they got 15 or so hard-core, true-believing, serial protesters to show up. 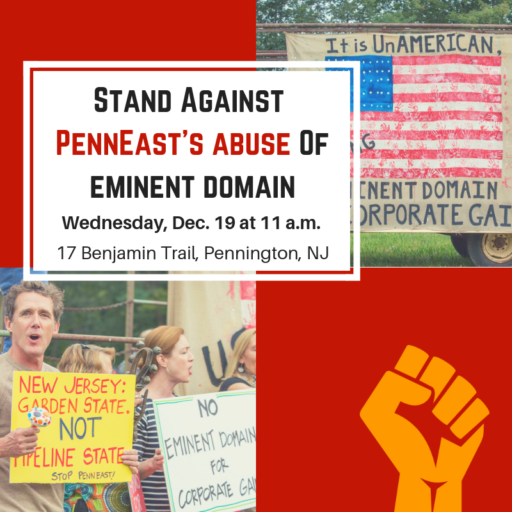 This particular fist design, according to Tin Eye search, appears to have been appropriated from a May Day poster available at deviantart.com. How fitting. There’s nothing like a little non-conformity to make a socialist conformist heart swell with pride and motivate him.

The only thing better might be the pictures of the two Millennial protesters holding signs that can only described as examples of unsurpassed superficiality. Are we to assume the young fellow with the yellow sign wants no pipelines in New Jersey? Is he one of the relative handful of Jerseyites who don’t heat with gas? Or, is he just an immature 30-some thing? Perhaps the baby rattle he’s also holding provides a clue.

ReThink’s subsequent Facebook posts tell us just how big a success the rally was. Here’s it looked: 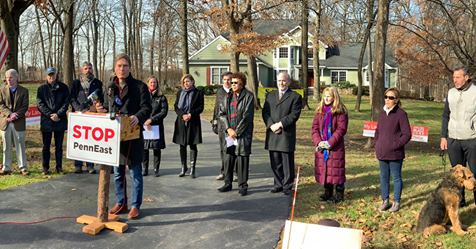 There were, by my count, 13 people plus a dog and the dog was truly bored. No matter; the point was to have something to write about, which the group did here. It’s just another day in the world of fractivism where nothing is ever what it seems or no one is who they pretend to be.