PennEast Pipeline has wisely asked the full Third Circuit Court of Appeals to hear an appeal of a very bad decision by a three member panel of its judges.

As followers of the PennEast Pipeline saga know, a panel of three judges on the Third Circuit Court of Appeals has ruled PennEast can’t condemn state land for its pipeline. It is a remarkable decision that, if sustained, will cause chaos for all pipeline planning. PennEast has, for this reason and others, asked the full Third Circuit to reconsider. Such moves face steep odds, but, as I noted here, New Jersey has made some very foolish moves undermining the premise of the panel decision. PennEast arguments are compelling, so it will be fascinating to see how this thing evolves. We all need to pull for them. 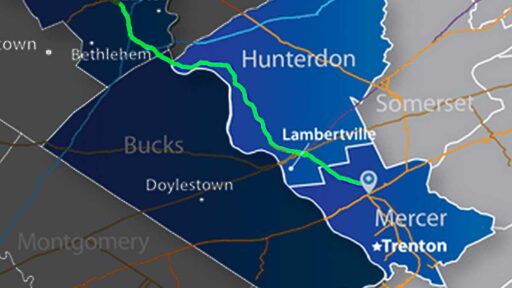 For over 70 years, Section 7(h) of the Natural Gas Act (“NGA”) has been understood to authorize natural gas companies to condemn the necessary rights-of-way for federally approved interstate natural gas pipelines—including properties in which states hold interests. Congress’s decision to vest natural gas companies with the federal government’s eminent domain authority reflects the reality that state governments, like other landowners, may oppose pipeline development for political reasons, or because they prefer infrastructure to be built elsewhere. Absent federal eminent domain authority, a single landowner can veto a federally approved pipeline. It is unsurprising that federal condemnation authority extends to property in which a state claims an interest: no interstate pipeline of any significant length can be built without crossing some such land, from river bottoms to lands encumbered by conservation easements.

The panel decision here, which categorically immunizes states from NGA condemnation actions initiated by certificate holders authorized by the Federal Energy Regulatory Commission (“FERC” or “Commission”) to secure a FERC approved route, upends 70 years of well-established practice and threatens immediate disruption of the natural gas industry. The decision rests on a profoundly mistaken view of the NGA and state sovereign immunity. The panel recognized, as it must, that no Eleventh Amendment problem exists if the federal government files the condemnation action. But the federal government can and has delegated its eminent domain authority to PennEast Pipeline Company, LLC (“PennEast”), and that delegation creates no constitutional difficulty. A condemnation action is not some separate in personam suit that threatens the state’s dignity or treasury. It is part and parcel of the federal eminent domain authority, which Congress delegated to certificate holders and guarantees states just compensation. Suggesting that this long-established arrangement raises Eleventh Amendment difficulties is profoundly wrong.

It is also profoundly consequential. The panel recognized its decision “may disrupt how the natural gas industry, which has used the NGA to construct interstate pipelines over State-owned land for the past eighty years, operates.” Op. 33-34. The panel suggested that disruption could be minimized if the federal government brings actions in its own name. But the panel never asked FERC about the feasibility of that alternative, or otherwise sought the views of that federal agency charged with interpreting and administering the NGA—whose authority this decision will seriously disrupt. Rehearing en banc is urgently warranted. At minimum, this Court should invite FERC to provide its views.

Notice that PennEast points out what Jim Willis stated here; that the decision empowers a single landowner to donate an easement to an anti-gas state such as New York or New Jersey and stop an entire project necessary for the good of the nation. The appeal doesn’t address my point that the decision also elevates the state’s interests in an easement not at all threatened by a pipeline over those of landowner who might well want the pipeline for revenue purposes, but it is sort of implied.

The appeal does draw attention to the easement factor though by noting they are non-possessory:

Most importantly, the PennEast arguments draw attention to the foolish way New Jersey jumped on the panel before appeals had even been considered:

The State emphatically disclaimed “asking for a veto here, whether as a matter of intent or consequences”; rather, it was “just suggesting a different entity”—i.e., the federal government—“needs to file the [condemnation] action.” Oral Arg. Rec. at 11:50-12:07 (June 10, 2019)…

Ignoring its earlier representations to this Court that it did not seek a “veto,” New Jersey promptly informed the D.C. Circuit that the panel decision here creates “significant uncertainty regarding both the pipeline’s route and . . . continued feasibility,” and “render[s] [the] properties . . . off-limits.” Mot. to Hold Matter in Abeyance 5-6, Del. Riverkeeper Network v. FERC, No. 18-1128 (D.C. Cir. Sept. 23, 2019). The D.C. Circuit granted abeyance until “post-dispositional proceedings” in this case conclude, or “other action . . . resolves the obstacle” this Court’s decision poses. Order, Del. Riverkeeper Network v. FERC, No. 18-1128 (D.C. Cir. Oct. 1, 2019). PennEast then asked FERC to issue a formal ruling interpreting Section 7(h)…

Among other things, PennEast invited FERC to confirm that Section 7(h) applies to state properties and Congress’s delegation of federal eminent domain authority necessarily brought with it immunity from Eleventh Amendment-based objections. FERC accepted the filing and set a comment deadline of October 18, 2019, emphasizing “the significance of the issues presented.”

New Jersey, in other words, jumped the gun, as I explained here. Was that deliberate? I suspect so, but who knows.

There is much more and I have highlighted several other compelling arguments offered by PennEast. I suspect they have a chance to get a reversal as a result, but we’ll see.