Conservation Voters of PA just engaged in some very dirty politics, targeting six Republican lawmakers in Southeast PA, who they want to replace with Democrats, with a completely false message and appeal to action. They’re determined to derail the increasingly popular Energize PA initiative and have resorted to lies to do so. I’ll get to that in a moment but, first, I want to talk about who Conservation Voters of PA really is; Penn Future, an attack dog financed by two private foundations not supposed to be engaged in any politics.

Those two private foundations are the Heinz Endowments and the William Penn Foundation, the wealthy elitists who fund not only Penn Future, but also StateImpactPA, the Clean Air Council and the Delaware PovertyKeeper, among other fractivist groups. Conservation Voters of PA identifies Penn Future as a “strategic partner,” but it’s more than that. Josh McNeil Executive Director of Conservation Voters of PA also serves as Vice President for Civic Engagement for Penn Future.

Additionally, the Boards of Directors of the two organizations include at least two overlapping memberships, plus Penn Future gave Conservation Voters of PA some $48,000 to build a mail list in 2017. It, also, in 2016, funded the Delaware Riverkeeper to the tune of almost $228,000 to promote the Environmental Rights Amendment and gave the Clean Air Council almost $152,000 to, among other things, “challenge drilling everywhere.” This was on top of other grants made directly by the Heinz Endowments and William Penn Foundation to these two organizations.

It’s all an exercise in funding obfuscation, but it starts with the two private foundations who are tax-exempt 501(c)(3) charities not permitted by law to do any politics whatsoever. So, what do they do? They give the money to Penn Future, who gives it to Conservation Voters of PA and “partners” with it to do the politics second or third-hand. It’s a deceitful workaround that allows the Heinz and Haas (William Penn Foundation) families to engage in tons of politics and no one much outside of little old me is calling them out on it. Message to gas industry and lawmakers: spend some time and money challenging their tax-exemptions because that’s their Achilles’ heel for crying out loud!

How bad is it? As bad as it gets. This is from Penn Future’s 2018 Annual Report (emphasis added):

Penn Future’s new civic engagement program, established as a result of our strategic alliance with Conservation Voters of Pennsylvania (CVPA), launched – in partnership with CVPA – a major project around the 2018 elections. Our Green in 18 campaign brought together almost 30 organizations who forged – for the first time ever – a common agenda for Pennsylvania’s environment. The agenda was used to stimulate discussion among the gubernatorial candidates about important land, air, water and energy issues. We used a field team, who organized volunteers to engage the candidates, and we used traditional press and social media to spread the word.

And, Penn Future put aside $206,000 for this political campaign during its 2017-2018 fiscal year, according to financial statements. The organization, as a 501(c)(3) entity, does have the right to do some politicking but it is limited. It reported minimal (slightly over $40,000) of lobbying expenditures in 2017, which doesn’t square in the least with its transfers to Conservation Voters of PA and therein lies the abuse of the system. It starts with the Heinz Endowments and the William Penn Foundation who, together, gave $837,000  to Penn Future in 2017. This is the Heinz and Haas money that eventually funds much of what Conservation Voters of PA does. 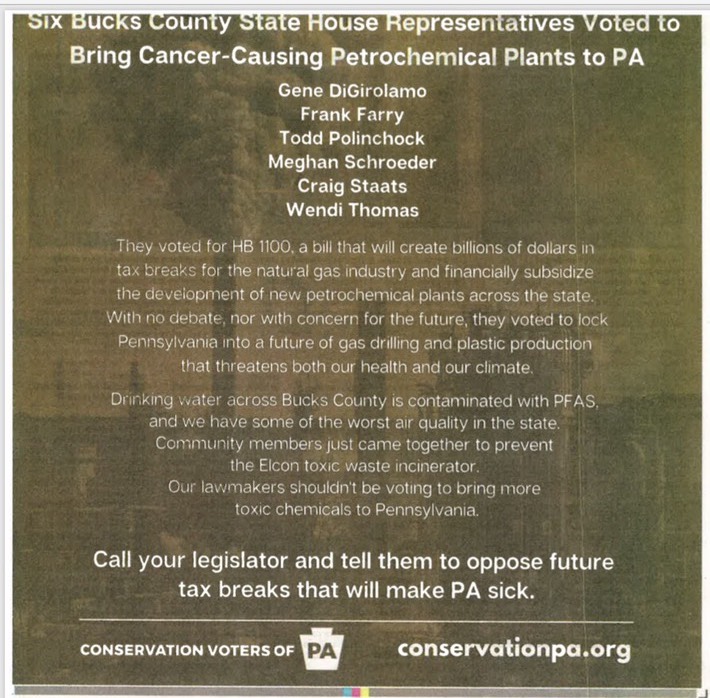 Message sent out by Conservation Voters of PA, which is a “strategic partner” of Penn Future

The six representatives are all Republicans, of course, as Conservation Voters of PA seems to be run by Democrats to support Democrats. This piece of social media hype targets them for supporting HB 1100, which would simply make Pennsylvania competitive with other states such as Louisiana.

The bill is the centerpiece of Energize PA, a broad-based program intended to let the Commonwealth build on the astounding resource it has in shale gas and oil. We are the No. 2 producer of natural gas in a nation that’s No. 1 in the world. Our opportunities, as a result, are simply astounding but we have the highest corporate taxes in the land and need to offer incentives if we’re to compete. Energize PA incentives would, moreover, be targeted only to companies willing to make major investments in Pennsylvania (think Shell and their cracker plant now under construction). That construction project is employing several thousand workers at high wages and when it’s done it employ hundreds permanently, plus require revamping every three years.

Who wouldn’t want this and all the economic multiplier benefits to be had? Well, the answer is the Heinz family, the Haas family, Penn Future and Conservation Voters of PA, every one of them an elitist entity living off previously earned wealth and not giving a damn whether anyone else gets to enjoy the economic security they have. Gas drilling saved Pennsylvania during the last recession and continues to bless it with huge economic benefits, but these elitists want it all squashed—every bit of it.

They complain about subsidies but, of course, the reality is that these subsidies only reflect a portion of the future wealth created by the new investment that wouldn’t happen without them. Compare this to renewable subsidies that are not only much larger but merely make up for ongoing losses that are inherent to the uneconomic operations involved and, therefore, must continue forever. Energize PA is about incentives to attract profitable companies that can make it on their own, while renewable subsidies simply cover what never made sense.

This cabal also cites health and climate impacts, but the truth is that there are no proven health impacts, only anecdotes and stories passed along by those with anti-gas political agendas (e.g, the Southwest Pennsylvania Environmental Health Project). As for climate, nothing has done more than natural gas substitution for coal to reduce CO2 emissions (to say nothing of other air emissions such as SO2, NOx and PM2.5 which have improved air quality tremendously).

And, what this about bringing “toxic chemicals” to Pennsylvania? Apparently Conservation Voters of PA imagines simply uttering the phrase makes it a legit accusation, but the fact is that air quality is improving everywhere in the U.S., as this chart illustrates: 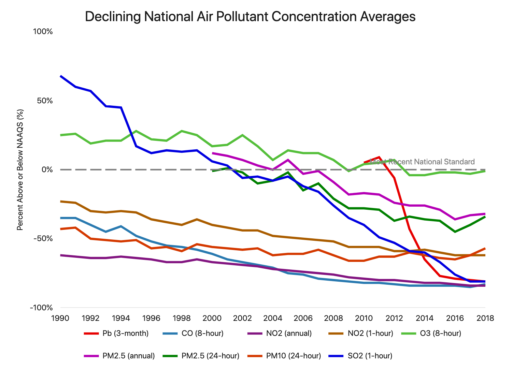 More importantly, it is natural gas that made so much of this happen with the onset of the shale revolution, but the elitists behind the above media attack on these six lawmakers are more interested in shutting Pennsylvania down to satisfy their own agendas. We have the opportunity of a lifetime and they’re trying to kill it. What is more appalling than the dirty politics itself, though, is the fact it’s being done through what is, essentially, a tax-exemption scam.