Sandra Steingraber moves from radical to ridiculous, insulting women employed in the oil & gas industry by calling them hotel maids and prostitutes.

Yesterday, I wrote a post about the anecdotes and imagery used by Sandra Steingraber as a poor substitute for science, charts and graphs. It turns out that was just the beginning, as our friend and former associate Joe Massaro caught Steingraber moving well beyond the typical radical nonsense she utters into the ridiculous, accusing women who work for the oil and gas industry of being no more than hotel maids and prostitutes. This is the peer reviewer Andrew Cuomo’s health department chose to review its report, which tells us everything – yes, everything – about the rotten to the core corruption that pervaded Cuomo’s decision.

Here’s the video clip (sound only available – click to listen): 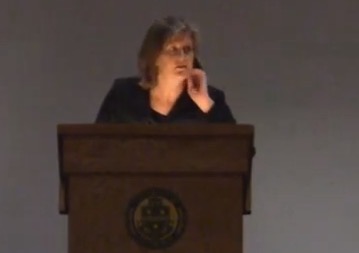 Sandra Steingraber insults women of the oil and gas industry, calling them “hotel maids and prostitutes.”

The Washington Times had a story on what happened and here are the key paragraphs:

In an April 6 lecture at the University of Pittsburgh, biologist Sandra Steingraber of New Yorkers Against Fracking described the fight over oil and natural gas development as a feminist issue.

“Fracking as an industry serves men. Ninety-five percent of the people employed in the gas fields are men. When we talk about jobs, we’re talking about jobs for men, and we need to say that,” said Ms. Steingraber in a video posted on YouTube by the industry-backed group Energy in Depth.

“The jobs for women are ‘hotel maid’ and ‘prostitute,’” she says. “So when fracking comes into a community, what we see is that women take a big hit, especially single women who have children who depend on rental housing.”

Supporters of the industry swung back by citing a 2014 report from the American Petroleum Institute, which found that women filled 226,000 oil, gas and petrochemical industry jobs, or 19 percent.

Now, one of the things that’s interesting about this talk given by Steingraber is that it is obviously the same one she gave at Wells College and yet the reporter for that event (Greg Mason) never reported the outrageous “maids and prostitutes” claim. Did she leave it out in that instance, or did Mason know it didn’t look good for his subject and so chose not to tell us? We can’t know for sure, but it’s easy to see how empathetic media types (supposed “journalists”) can distort a story simply by leaving material out.

Regardless, Sandra Steingraber obviously intended to insult women who work in the oil and gas industry, which should be disturbing to anyone who cares about this individual’s credibility. She not only had her facts wrong (she prefers poetry, anecdotes, imagery and careful ponderous intoning of her voice to convey a faux seriousness) but couldn’t help but resort to the diminishing of any non-academic type who chooses to work in the real world. This is the type of biased condescending pseudo-intellectual Cuomo chose to give the imprimatur to his health report.

One wonders what these women might think of Sandra Steingraber’s comments:

Also, just for the record, the Federal Bureau of Labor Statistics states there were 104,000 women employed in oil and gas extraction alone, some 17.9% of the total, and that’s without counting pipeline activity or all the ancillary industries involved (including hotel workers by the way, which happen to be honorable jobs, notwithstanding Sandra Steingraber’s denigrating remarks).

Finally, let’s dispense with this reckless prostitution rumor-mongering. Crime statistics simply don’t back up the irresponsible speculation about crime increases, as we noted in an earlier post. Moreover, the Center for Rural Pennsylvania found the crime rates for minor offenses (which includes prostitution by classification) in core Marcellus Shale counties with low activity declined from 25.0 incidents per 1,000 persons in 2001-2007 to  21.7 in 2008-10. The rate in high-activity areas went from a rate of 24.2 down to 20.9.

There was exactly one case of prostitution reported by the Pennsylvania State Police in Bradford County for 2014. That’s an incident rate of 0.016 per 1,000 residents, compared to a rate of 15.9 incidents per 1,000 for Pennsylvania as a whole (2013). For those of you from the Ithaca area who deal in anecdotes and imagery, rather than numbers, that means there was 994 times as much prostitution per 1,000 Pennsylvania residents as there was for every 1,000 Bradford County residents. There’s no prostitution problem in Bradford County. There is one in Ithaca, though, as recent news stories have documented. But, don’t hold your breath waiting for Sandra Steinbgraber to focus on it. She’s doing anti-shale anecdotes and imagery and too busy to focus on real problems affecting women.