The Park Foundation, plaything of Adelaide Park Gomer, has brand new offices and the lady herself turns out to be a poet. Who knew?

The United States Senate Committee on Environment and Public Works Minority Staff Report has produced a report entitled The Chain of Environmental Command: How a Club of Billionaires and Their Foundations Control the Environmental Movement and Obama’s EPA. It is must reading for every natural gas supporter. Yes, it’s a political document and, if you’re an Obama supporter you’ll need to put that part aside. Nonetheless, it is stuffed full of facts that explain the undue influence of groups such as the Park Foundation on our nation’s energy policy. It’s also offers some unique insight into the nature of that particular group, the Park Foundation being about as nefarious as it gets when it comes to fractivist funders.

Did you know Adelaide Park Gomer, the radical daughter of the guy who built the Park Communications empire and fortune, was a poet? Yes, when you’ve inherited hundreds of millions of dollars and have no discernible talent other than spending it, you can pass out grants to organizations that will fete and indulge you in return.

Common Cause, for example, has received $100,000 in 2014 and several additional grants in previous years. It has returned the favor in two ways: (a) with its regular reports falsely suggesting the gas industry spends more than the Park Foundation trying to influence New York fracking policy, and (b) an Civic Advocacy Award to Adelaide Park Gomer for “environmental advocacy in the public interest.” No doubt they’d give me an award too if I gave them $415,000 over the last few years. We learn another example from the Senate Committee staff report. Footnote 206 on page 33 discloses Adelaide Park Gomer is a poet. She authored a poem for the Environmental Grantmakers Association (EGA), which the Park Foundation has funded with nearly $38,000 in grants over the last six years, and, of course, they published it. Here’s one stanza from the Ballad of A Dying Planet:

Grasslands and forests paved over forever By asphalt and buildings while mankind endeavors To replace nature with ugly big boxes and towers, Golden arches, Disney worlds, a banquet of horrors.

It does more to reveal Adelaide Park Gomer’s revulsion with the middle class, than her environmentalism, of course, but that’s hardly a surprise. She obviously considers herself part of the ruling aristocracy. Sadly, there are another 15 stanzas of this 9th grade material, which EGA offers to enlighten us commoners. EGA is described in the Senate report as follows:

Environmental Grantmakers Association (EGA) is a place where wealthy donors meet and coordinate the distribution of grants to advance the environmental movement. EGA encourages the use of prescriptive grantmaking. It is a secretive organization, refusing to disclose their membership list to Congress…

In New York and Colorado a pseudo-grassroots effort to attack hydraulic fracturing has germinated from massive amounts of funding by three foundations: Schmidt Family Foundation, Tides Foundation and Park Foundation. Since each of these foundations is believed to be part of the exclusive and nontransparent Environmental Grantmakers Association (EGA), it is no surprise they coordinated funding schemes to achieve a desired outcome. Moreover, in typical secretive billionaire donor fashion, the foundations’ funding was funneled through fiscal sponsors. Funding through these intermediary organizations, such as the Sustainable Markets Foundation (SMF) and Food & Water Watch, create distance between the wealthy foundations and alleged community-based outfits. One scheme, led by the New York-based Park Foundation and California-based Schmidt Family Foundation, provides numerous grants to the New York-based SMF, which serves as the fiscal sponsor for multiple New York groups engaged in this effort, including Water Defense, Frack Action and Artists Against Fracking. During 2011, SMF gave $147,750 to Water Defense.258 The following year, SMF funneled a $150,000 grant “to support Water Defense” from Schmidt.259 Notably, Water Defense was founded in 2010 by actor Mark Ruffalo, who has an estimated net worth of $20 million and was listed on Time Magazines’ 2011 “People Who Mattered” for his anti-fracking efforts.260 In 2011, SMF gave Frack Action $324,198, with $150,000 stemming from Schmidt grants to SMF.261 Ironically, one of the Schmidt grants specified that $100,000 go “to support Frack Action’s grassroots campaign fighting for a ban on horizontal hydraulic fracturing”262 (emphasis added). However, the mere funding from the California-based Schmidt demonstrates Frack Action’s campaign is anything but grassroots. In 2012, SMF received $185,000 for Frack Action through grants from Park263 and Schmidt.264 While the amount of money funneled to Yoko Ono’s Artists Against Fracking cannot be identified, as SMF’s 2012 IRS Form-990 is unavailable, Artists Against Fracking’s now-removed website directs donations to SMF.

This is exactly what we have observed over the last three years in documenting how the Park Foundation and its allies work to create the news, report the news they created, act on the news they reported and assert their special interests to the detriment of ordinary citizens and landowners who they view as mere “collateral damage.” Adelaide Park Gomer would have us believe she’s a heroine of the environmental movement, but what we see instead is an individual spending her wealth for self-aggrandizement and being humored by those who love her money. Think I’m exaggerating? Well, read her speech at the Common Cause award banquet. Here are the opening lines:

This is an honor I certainly did not expect. I have always resonated with and respected the work of Common Cause. Thank you so much for this recognition. It means a lot to me.

Really? She didn’t expect an award after dropping hundreds of thousands of dollars on them? Somehow, that doesn’t “resonate,” except with media enablers who pass this nonsense on as if it was serious and do little or nothing to ask the questions that need to be asked.

There are other questions they ought to be asking. Why, for example, is the new Park Foundation headquarters in Ithaca being heated with natural gas, if “fracking will ruin our pristine landscapes, agriculture, our tourism, and our wine industry,” as Adelaide Park Gomer told her admirers at Common Cause? Fracking, after all is how natural gas is made this days. Yet, here is a picture of the new Park Foundation palace, together with a closeup of the gas meter and excerpt of the building plans showing the location: 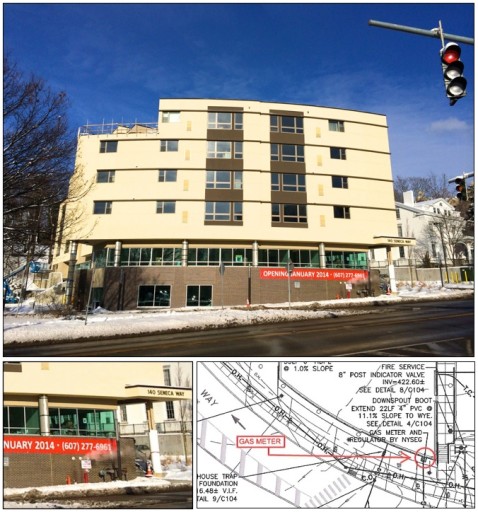 You can read a complete review of the new digs here at Ithaca Builds (great blog with many more photos!), and you’ll notice there’s some discussion of the owner’s intent to secure LEED Commercial Platinum Certification for the interior space, but no discussion of the gas service or the use of solar energy, for example. Perhaps there are some solar elements to the project, but they don’t show up in any of the descriptions and this description of the building project, which includes apartments on the upper floors, says the rooftop offers “a roof top terrace overlooking downtown, where you can grill, entertain or relax.”

Apparently, this particular combination of “asphalt and buildings” isn’t ugly by Adelaide Park Gomer’s standards (or ours). It’s just a grand location for the Park Foundation, in fact, and the developer even says “The building will also include many green features, which will help promote a sustainable and healthy lifestyle.” Yes, and those features include natural gas.

So much for consistency at the Park Foundation, where the palace to be occupied by the Ithaca’s poet laureate will be heated with the gas she spends millions to prevent others from having or developing. Once again, it’s hardly a surprise, though. After all, her home is also heated with natural gas, just like those of her minions Tony Ingraffea and Sandra Steingraber. If she wants to give us $415,000 we can give her the Best Example of Double Standards by a Snob Award.  There’s a lot of competition, though, so she’ll probably need to up the ante a bit.

11 thoughts on “The Park Foundation Palace and Its Poet Laureate”