Out-of-town protesters are the workhorses of the pipeline opposition. Financed by billionaires, they destroy and disrupt, leaving behind their dirt.

A fellow by the name of Matt Cordio, who is President of Skills Pipeline, a technology talent-solutions company, and the founder of Startup Milwaukee, recently wrote an outstanding opinion piece that was published by the Duluth News Tribune. It captures the essence of pipeline opposition today, and warns Minnesotans what they, and all of us, are up against, namely out-of-town protesters. 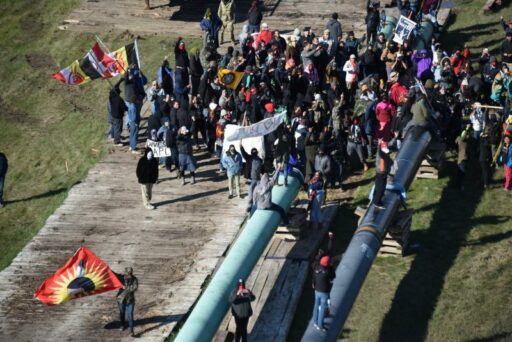 I encourage readers to read the entire thing, but here are they key observations (emphasis added):

In 2016, the infamous Dakota Access pipeline protests brought professional activists to North Dakota, leaving local taxpayers on the hook for millions of dollars. Now, professional protesters are setting their sights on Minnesota. A corroding pipeline from the 1960s that runs through Minnesota is approved to be replaced with a new, safer pipeline to help deliver fuel to the United States. But activist groups are threatening to stall the process by any means necessary.

If we learned anything from the Dakota Access protests, it’s that these are not local citizens peacefully demonstrating; rather, they are out-of-town protesters funded by billionaires to try to cause damage and disruption — all at the expense of local communities, law enforcement, and taxpayers.

As we’ve seen time and again, local environmental nonprofits are often doing the bidding for larger billionaire-funded organizations with the main goal of preventing any and all pipelines. These local nonprofits secure financial backing from notable individuals such as George Soros and Tom Steyer, which opens the door for out-of-state protesters to join the cause.

The activist group Honor the Earth (honorearth.org) has already planned several protests and organized events to try to stall and prevent updates to Minnesota’s pipeline. Authorities in Minnesota are taking notice and preparing for a high volume of out-of-state activists to enter their state by looking to South Dakota for help — and with good reason. The executive director and co-founder of Honor the Earth was also a leader at the destructive Dakota Access protests, as the Wall Street Journal and others reported.

The Dakota Access Pipeline protest came at a high cost to taxpayers — and not just financially. A reported 48 million pounds of trash were removed by cleanup crews, and that cost taxpayers over $1 million alone, according to the Washington Post. The clean-up crews worked for more than two weeks to clear trash and debris and, shockingly, to relocate a few K-9s left behind to an animal shelter.

But clean-up costs are not the only risk from professional protesters. They create serious and sometimes even dangerous problems by breaking state laws and by putting themselves and others at risk. Out-of-state protesters from Climate Direct Action protested the Dakota Access pipeline by tampering with two operating pipelines’ emergency valves, the Bismarck, N.D., Tribune reported. Luckily, these protesters didn’t cause any damage, but their actions brought attention to a much larger issue: safety. What would have happened if their protest stunt had caused an accident?

And what if a similar situation happens in Minnesota? It appears protesters are taking too big a risk at the expense of their own cause…

Minnesota — or any state — shouldn’t be fooled into letting professional protesters speak for them, especially when they are only pushing the agenda of the billionaires behind them. Local taxpayers will end up footing the bill, cleaning up the mess, and risking safety updates to our energy infrastructure — just like in North Dakota.