Otsego County faces many issues and among them is the fact no natural gas means no jobs. Trendy fractivists are just fine with that but others? Not so much.

Lately the antis have been petitioning the Otsego County Legislature to ban gas trucks carrying CNG from Pennsylvania across Otsego County to the Iroquois Pipeline in Manheim, New York.  From there the gas can go to NYC or New England.

The trucks are used because the antis and Governor Cuomo have stopped construction of pipelines in NYS.  I recently spoke to our County Legislature and reminded the members that pipelines are safer than trucks because pipelines don’t tip over.

Mike Zagata’s column and Jody Zakrevsky’s op-ed last week delivered a nice one/two punch to the “no gas, no way, keep-it-in-the-ground” crowd who are ideologically tethered to an anti-carbon agenda.

Mr. Zagata, the former DEC Commissioner, wrote his letter from an environmental/ scientific point of view. He spoke of the universality of carbon dioxide in nature, industry, and modern life. In a series of questions, he exposed the hypocrisy of protesters who single out fossil fuels, especially gas, without acknowledging the benefits enjoyed by the protesters themselves. All forms of energy have their downsides, a fact that the protesters rarely acknowledge or may even know.

Mr. Zavretsky is not alone in his economic analysis. Mr. Zavrevsky’s predecessor, Sandy Mathes, addressing the Otego Town Board early in his tenure, noted the two main factors businesses look for in expansion — good infrastructure and cheap energy. Mr. Mathes expanded on this theme while addressing the Schenevus Town Board, preparing a site to be marketed as a distribution center. He added “shovel ready” permitting to infrastructure and, during the Q & A, added PILOT tax relief and cheap energy as necessary elements to counterbalance New York State’s high taxes and regulations. Again, GAS!

So we’re two for two for gas with our County economic leaders. Last week’s header for Mr. Zavesky’s letter sums it up neatly. “No Natural Gas = No Jobs.” Amen to that.

In the meantime the “No Gas = No Jobs” regime continues. But, there are consequences. 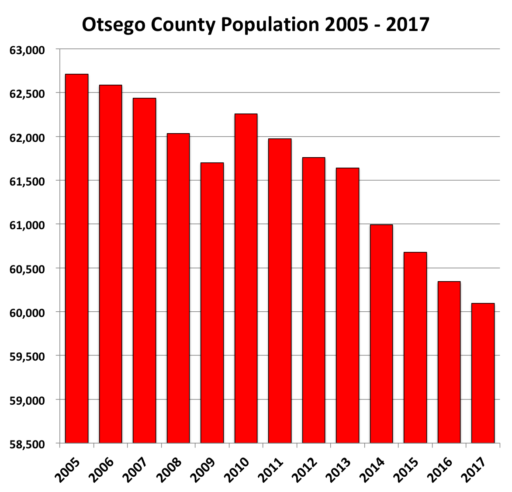 When school opened last week, Unatego had 762 students, down about 60 from the previous year. Twenty years ago, the enrollment was 1,471. As Governor Cuomo and the protesters shut the valve on gas, young families continue to move, looking for work and opportunity. As Mr. Zavfrevsky observed, each job lost is, potentially, one less family living in our area. 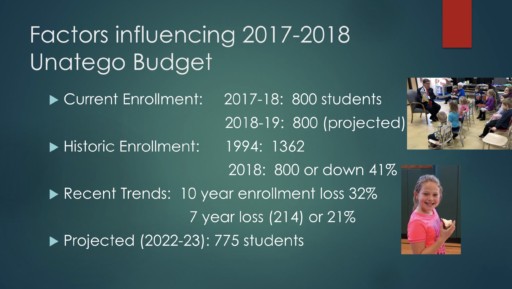 Perhaps Governor Cuomo and the protesters look for salvation in the form of 800 megawatts of wind turbines in Long Island Sound. Problem: that energy’s not here. And it’s not now. When built, the electricity goes to NYC and Long Island. However, thanks to the Public Service Commission (PSC), 53% percent of the bill comes Upstate. The PSC’s Offshore Wind Renewable Energy Credits support the project and the PSC states that, “every state electric utility or load serving entity SHALL (emphasis mine) contribute to the project.”

That’s you, folks. You’re paying the bill. It’s a tax, but your local utility is the tax collector.

But in the long run, it’s good, right?

Wrong! If you want want a full picture of what is in store for New York, take a look at present day Germany. The Governor is following the German policy of Energiewende, a full scale prioritization of renewable enegy. After spending over 100 billion euros, German energy is still primarily fossil fuels (79%) with renewables (15%), and nuclear (5%). With last year’s sudden rise in rates, one kwh of German electricity costs about the American equivalent of forty eight cents. NYSEG charges about twelve cents. There has been no reduction in German carbon dioxide emissions, in fact, a rise of 2%. Lots of economic pain for no environmental gain. See a problem here?

So, if cheap energy is a prerequisite for job creation, my advice to the young is grab your Google maps and punch in Texas, Tenneessee, or . . . Pennsylvania. The difference between the Southern Tier of NYS and the Northern Tier of Pennsyvania tells it all. Over the last seven years the eight New York counties of the Southern Tier have had a rise in their GDP in their manufacturing sector of 1.5%. The seven counties of Pensylvania’s Northern Tier have seen a rise of 24%. That’s 16 times the money made by their New York sister counties directly across the border.

Again, Pennsylvania has gas. New York has “No Natural Gas = No Jobs.”

Cuomo’s got to go!