Vic Furman writes an open letter to the Town of Fenton Planning Board in Broome County, New York in support of the NG Advantage natural gas terminal project.

You have made the correct decision in permitting NG Advantage to establish a natural gas transfer station on a service road already zoned industrial by the Town of Fenton. Stick to it!

My name is Victor Furman, I am a resident of Broome County and Chenango Forks, admittedly not of Fenton, but I have attended your meetings on the proposed site and was there when you voted for approval.

My interest is not as one who will profit from NG Advantage personally as I have no financial interest in the company but, rather, as one who wishes to see this county grow its jobs and tax base.  We see an exodus of our youth and their parents fleeing high taxes and inopportunity to states that do not hold themselves prisoners to fear. They seek to escape those who would rally against local town boards to intimidate and suppress common sense actions that offer hope of reversing the loss of residents by bringing high paying jobs here and giving our youth a glimpse of a future worth staying for.

I was not intimidated by the hateful remarks made to me by senior citizens like myself at the Port Crane Fire Hall meeting. I ignored their remarks about my family as I showed my support for your original 100% correct decision to permit the NG Advantage facility.

I am, however, perplexed by the comments made about my residency and right to be supportive of NG Advantage. I support this opportunity for our community as a Broome County resident who is very well versed in the benefits of clean burning natural gas and the fear mongering of those who believe we should “keep it in the ground.” Let me, therefore, share with others what you may already know from the recent meetings.

There was, at the outset, no opposition to the transfer station even though your meetings and the project were advertised. You had been meeting on the NG Advantage project since the beginning of the year. The decision to permit hit the news and, only then, did the anti-anything-fossil-fuel crowd mobilize to attend the Fenton Planning Board meetings. Like me, they were from out of town, even out of state. They came in your community, our community, with stories about compressor stations because they had no transfer stations and didn’t seem to know or care about the difference.

They don’t care about Fenton or Broom County, for that matter. They’re ideologues who couldn’t care less about Fenton or Broome both of which are dying. The most recent Census estimate for 2016 gives Fenton a population of but 6,446 people, some 218 families less then just 6 years earlier in 2010 when Fenton had a population of 6,674 people. The Town has lost over 300 people—over 50 people per year—and, at this rate, will soon need no schools because there won’t be any children. This is what the Fenton Planning Board needs to plan around; how to avoid this calamity.

Like most upstate towns, villages and cities, the Town of Fenton is seeing families fleeing New York not just because of high taxes, but also because of the lack of jobs, over-regulation and environmental extremism that has impeded the betterment of the environment through relentless fear-mongering.  I refer to the intimidating letters and phone calls you have received on the permitting of NG Advantage.

The cry of the anti is now “I am not against natural gas, just the location of the proposed site and I fear for the children.” Being involved in pro gas activism since 2008, I have seen this cry many times in many venues and I sympathize with those who have real concerns but are not educated on the facts. That is the case here and many others simply want to avoid the facts.

Just look at the bus tour offered by NG Advantage. Only 11 people took advantage of this educational tour that would have put the fears of many to rest. This was noted at the Port Crane Fire Hall along with the impeccable safety record of NG Advantage.

Clearly, the safety of children should never be compromised for the purpose of profit. However, after listening to the community and learning about NG Advantage as the father of four and grandfather of 11, that’s not the situation here—not even close. I would never put a child at risk for the sake of profit or personal gain and I can say with confidence the children are in more danger of being hit by a train in the backyard of the school or drowning in the river then being a victim of an explosion at NG Advantage’s site.

I close this letter commending the board for its due diligence in permitting NG Advantage. I sincerely hope that, as local officials in place to serve the community, you do not cave into the intimidation and fear-mongering tactics you have regrettably faced due to the highly paid ($2.1 million and counting from the Park and Rockefeller families) activism of Walter Hang from Ithaca or what they say are the volunteer efforts of Vera Scroggins from Pennsylvania and William Huston from the Town of Binghamton. 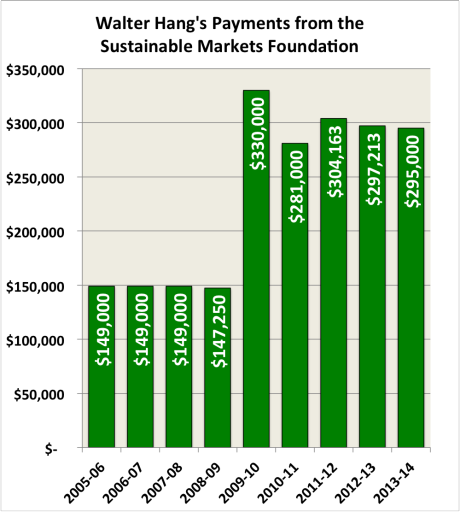 Walter Hang’s payments from the Park and Rockefeller families up through 2014.

Stand strong to your commitment to growth and prosperity for your community and mine! NG Advantage is not just local jobs. Their facility will grow jobs local to us and the northeast by providing cheaper fuel through a virtual pipeline that is most needed and planned for an almost ideal industrially zoned site. Walter Hang and other well paid community fear-mongers couldn’t care less about destroying lives and jobs. Indeed, they work for extraordinarily rich families who would celebrate the destruction of Upstate New York’s economy so they could have everything for themselves. Don’t let it happen. Plan for the future of Fenton, not its destruction.

11 thoughts on “An Open Letter to the Fenton Planning Board”