Vera Scroggins is now moving her attention to Ohio where Cabot Oil & Gas is exploring new territory, but Ohioans need to know a few things about her.

Vera Scroggins is the endearing “golden girl” of fractivist myth, lauded by those eager to treat her as the granny protester who takes on big oil. The truth, though, is a far different thing, which virtually everyone in Susquehanna County and environs knows all too well. Ohioans unfamiliar with Vera’s history can’t be expected to know much about her when she comments on fractivist Facebook posts and the like, but they need to learn quickly as she is already following Cabot Oil & Gas as that company looks to potentially expand its operations into Ashland, Holmes and Richland Counties there. They’ll be shocked when they dig into the matter; Vera Scroggins is no ordinary protester.

Those who desire to get a quick first-hand look at the real Vera Scroggins might want to look at these videos of her confronting Phelim McAleer, creator of the excellent documentary FrackNation during a fractivist publicity stunt:

Far from being a local concerned resident, these videos show an individual as removed from Ohioan manners and values as could ever be possible: a New Jersey transplant with a road rage personality.

Vera Scroggins is, in fact, one of those folks from the 1960’s who simply refused to grow up.  She absolutely revels in being a perpetual teenager, seeking attention by being outrageous, as these messages (No.’s 952 and 953) regarding her involvement in the naturist movement demonstrate.

Vera Scroggins also goes by the name of Vera Duerga and, occasionally, her birth name of Vera Otasevic.  She once owned land in Susquehanna County, Pennsylvania, but subsequently sold it to a group calling itself the Shanti Temple, although Vera once identified herself as an atheist and, subsequently, led other protesters in prayer (check out the video yourself, especially at 14:00 when Vera can be heard saying “Let’s pray,” followed by “just make sounds.”

She lives in a mobile home in Brackney, Pennsylvania shared with her adult daughter and grandchildren at last report.  She’s an internet junkie and participates in on-line outrageous discussions crossing every line of decency with respect to the commentary one would expect based on her press image as some innocent, eccentric and harmless old lady who is part of the local community.  Here’s more from a post I did five years ago:

The truth is this; Vera’s only standing to get attention and the thrill of sticking her thumb in her neighbors’ eyes.  Her most recent episode, where she blocked a fire exit in a movie theater where FrackNation was being shown and engaged in battle with the local fire police, is a perfect illustration.

She also loves the sleight of hand.  Who can forget her little video of Craig Sautner telling the EPA to drink his water?  Vera used a very short out-of-context clip to make it appear Sautner was simply challenging EPA representatives when, in fact, he was learning from EPA the only thing that made his water unsafe was his probably malfunctioning sewage system, a fact that turned him into a raging bull and caused the EPA to walk out.  Fortunately, for all of us, Lisa Barr released a video showing the entire episode.  It’s all chronicled here.

Then, there was the time she tried blaming an algae bloom on natural gas drilling and apparently told a New York State Senator that was the case long after learning the opposite, but he inadvertently set the record straight, which caused her to lecture him. 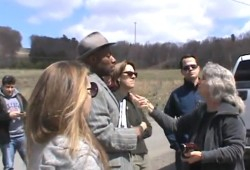 And, of course, there’s this: 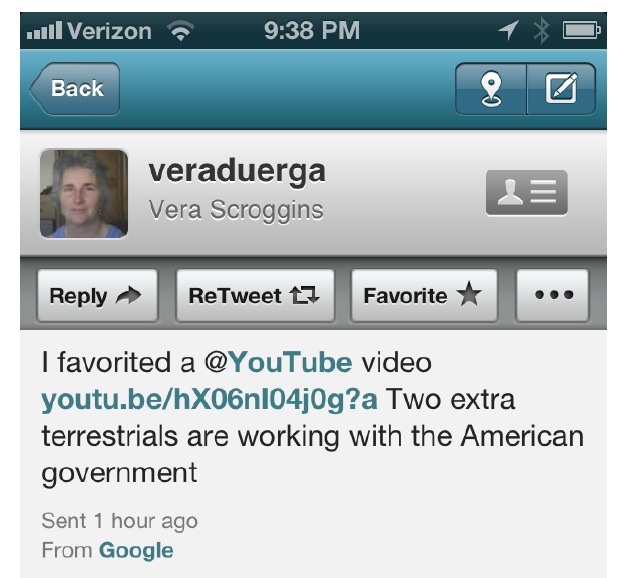 A lot has happened and a lot has been learned since then to add to Vera Scroggins’ resume. In the latter category, there is Vera’s appearance (at about 0:45) in a trash movie called Vomitorium.

Then, in 2014 something happened during one of the numerous court hearings regarding Scroggins’ repeated violations of court orders to stop trespassing on gas well sites. It was “one of those enigmas wrapped in a riddle” as three of Vera Scroggins lawyers (she was represented by the ACLU and a group known as Public Citizen) asked to withdraw their appearances as her attorneys. One would think getting the ACLU to want out is next to impossible, given its history, but Vera Scroggins managed to do it.

During the testimony, the issue of returning personal photos suddenly arose. Apparently, these photos were inadvertently included in Scroggin’s answers to some interrogatories from Cabot’s attorneys. Scroggins attorneys, who continued to represent her under court order, described the material as “accidental” and “sensitive.” It came out that Scroggins apparently wanted Cabot to either return the photos or agree not to refer them to criminal authorities. What was so bad as to cause three politically sympathetic lawyers to want to resign and Scroggins to worry about a criminal referral? Something bad, apparently.

Scroggins’ trespass saga, of course, has been an unending one, as she has violated one court order after another. It’s all part of a campaign of self-aggrandizement and attention seeking on a grand scale. She makes increasingly outrageous claims and does increasingly outrageous things in her constant struggle one-up her last 15 minutes of fame. Her rhetorical screaming about violations as if Cabot were running wild in Susquehanna County, for example, is easily debunked by running a DEP report for Susquehanna County from January 1, 2007 through yesterday, which shows the following:

This is despite the DEP habit of attaching multiple violations to single incidents in the manner (e.g., “you spilled some fluid on the well pad, it could have led to some pollution if not corrected and you didn’t report it properly, so that’s three violations for you”). So far this year, there have been a total of 145 inspections and only two with violations, raising the no violations rate to just shy of 99%. The rate for all of 2017 was also over 98%.

That’s a pretty darned good record for a company that’s invested literally billions of dollars in Susquehanna County and revived its economy, not to mention  multitude of other benefits (tallied here by a our guest blogger, Chris Acker). Ohioans who give a darn about the future of Ashland, Holmes and Richland Counties ought to think about that and consider who Vera Scroggins really is before they buy into her self-promotion as a prophet of doom.