Offshore wind projects along the East Coast are being regularly challenged successfully on environmental impact grounds, especially by fishermen.

In Massachusetts and New York, fisherman seem to be winning small victories against offshore wind farms. The Edgartown Conservation Commission in Massachusetts denied an underwater cable route off the town’s coastline, citing the potential disturbance to marine habitats and other conflicts. Vineyard Wind LLC plans to get a “superseding order” from the Massachusetts Department of Environmental Protection to overturn the commission vote in order to build 84 wind turbines off Martha’s Vineyard.

Furthermore, the Bureau of Ocean Energy Management (BOEM) is delaying a federal environmental analysis for this wind farm to make sure it gets its assessment right, taking closer to the two years that are allowed for the assessment. In New York, East Wind LLC has withdrawn development of a 100-turbine wind farm off the Hamptons on Long Island primarily due to concerns about impacts on fishing and will consider an alternate route instead.

A Martha’s Vineyard town in Massachusetts denied a permit for Vineyard Wind to place underground cables in the Muskeget Channel between Martha’s Vineyard and Nantucket that would carry power from the wind farm to shore. The commission indicated that while the company made efforts to mitigate the impact of the 400-megawatt cables, other information, such as a decommissioning plan, was missing. Vineyard Wind plans to request a superseding order from the Massachusetts Department of Environmental Protection to construct 84 turbines into the deep waters off the coast of Massachusetts totaling 800 megawatts of power; it would be the first utility-scale wind farm off the U.S. coast.

Despite the delay, the Bureau of Ocean Energy Management has a two-year time frame to produce an environmental review of a major infrastructure project, which is a standard set by the Trump administration in 2017. Vineyard Wind filed its construction and operations plan with the Bureau in December 2017. BOEM is the chief leasing and permitting agency for offshore wind. The agency is proceeding with caution to identify areas where wind power would be appropriate, to lease those areas to developers and to permit those projects. After BOEM completes its review, it will publish its findings and notify all stakeholders.

Vineyard Wind plans to start work on the project by the end of the year, and start generating power by the end of 2021. Vineyard Wind’s utility contracts require the first phase to go online by January 15, 2022. Also, the company has apparently qualified for the federal tax credit that expires at the end of 2019, but that status could be in trouble if certain milestones are not met. 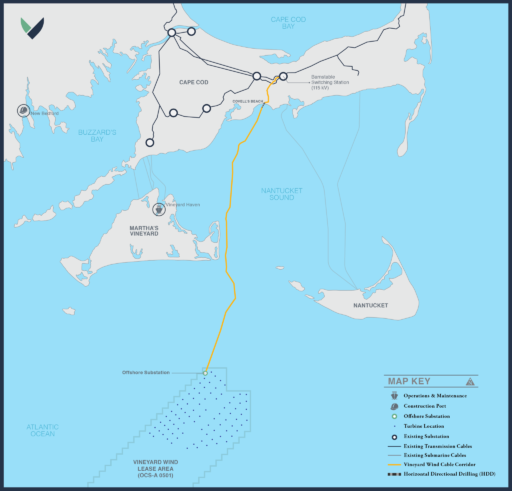 East Wind LLC, a subsidiary of EnBW Energie Baden-Württemberg AG, withdrew its plan to develop an offshore wind farm that would have spanned the Hamptons (East Hampton and Southampton) in favor of sites to the west, and is urging the federal government to restrict turbines from East End waters. The decision to recommend against development off the Hamptons was primarily related to concerns about impacts on the fishing industry.

East Wind identified six sites for turbines off Long Island, each requiring around 79,000 acres of sea bottom (almost 125 square miles). Each site would contain around 100 turbines to produce about 800 megawatts of power. In withdrawing its Fairways North proposal, East Wind plans to focus development efforts in a proposed New York wind-energy area on waters farther to the west, from Long Beach to Patchogue, known as Hudson North and South.

BOEM has not yet announced the final map for new wind-energy areas off New York. Tentatively proposed federal areas include two large blocks off the Hamptons, and several larger blocks to the west, all in an area known as the New York Bight.

New York State, however, does not support wind-energy areas off the Hamptons and has registered opposition with the federal government, despite the corridor having the highest wind resource in the entire New York Bight area. This is curious because of Governor Cuomo’s and the State of New York’s strong support and incentives for renewable energy, especially including offshore wind. According to New York’s statement, it recommends areas outside the Hamptons-area sites for environmental and economic reasons. The local town management in East Hampton indicated that seeing turbines on the far horizon from local beaches would be unacceptable.

Dominion Energy Inc. began work to install cables for a wind farm in the Atlantic Ocean off Virginia Beach. Work on the two turbines located 27 miles offshore, east of Virginia Beach, will begin early next year and the turbines are expected to start producing power later in 2020. The turbines will have blades reaching about 600 feet above the ocean’s surface, which are not expected to be visible from the shore. Dominion is partnering on the project with the Danish firm Orsted.

The two turbines will have a capacity of 12 megawatts and cost $300 million. Dominion leased 112,800 acres from the federal government in 2013. The area is large enough to hold turbines with a capacity totaling up to 2,000 megawatts.

Dominion sees this as a study project. The utility needs to confirm that the test turbines operate as expected and generate the required capacities, and it needs to assess the impact on marine life, making sure operations are consistent with the environmental assessment.

Dominion’s project is the first to be built in federal waters in the United States; Rhode Island has five wind turbines operating in state waters off Block Island, replacing expensive oil generation.

Several east coast states (Maryland, Massachusetts, New York, Delaware, Connecticut, and Virginia) are in the early stages of offshore wind projects. Offshore wind is expensive, costing more than natural gas and onshore wind power. It behooves states to move slowly and assess all the factors that impact these projects from the tourist industry to the fishing trade to any possible conflicts with the defense mission of our armed forces and to ensure that consumers are not paying more for its power than other technologies would cost.