[Editor’s Note: Offshore wind is hugely expensive compared to natural gas and could have major adverse impacts on commercial fisheries according to a government study.]

The Bureau of Ocean Energy Management’s (BOEM) draft supplemental environmental review for Vineyard Wind off the coast of Martha’s Vineyard in Massachusetts indicates that offshore wind farms could have a major “adverse” impact on commercial fisheries. The study outlines the effects that the offshore wind sector in the Northeast could have on other industries, the environment, and marine life. It notes that offshore wind could result in major cumulative impacts to commercial and recreational fishing, scientific research, and in some cases environmental justice.

Additionally, the study indicated moderate cumulative impacts are expected to marine mammals and minor cumulative impacts to air quality. The study also notes concern that offshore wind turbines and transmission cables could entangle with fishing vessels and gear, and that wind farms could result in the temporary or permanent displacement of fishermen in certain areas. This is a consistent issue for commercial fishermen as previously noted in this IER post.

Overall, Vineyard Wind and the potential build-out of other offshore wind projects are anticipated to affect fisheries negatively due to navigational hazards, displacement of fishing areas and habitat changes to fishing. According to the document, the Vineyard Wind project and “other future offshore wind development would impact commercial fishing revenue,” with potential losses in the hundreds of thousands of dollars to the millions.

The study concluded, however, that those impacts could be reduced by measures such as financial compensation to affected fishermen, and uniform spacing and layout of turbines. The utilization of broad transit pathways for fishermen has been a sticking point for offshore developers in New England, which last year suggested a uniform layout for spacing with buffers of one nautical mile between turbines for vessel navigation to try to appease industry.

The draft report by the Interior Department was initially prepared as a required environmental impact statement to examine the effects of Vineyard Wind, a proposed 800-megawatt wind farm off the Massachusetts coast. The Vineyard Wind project is being jointly proposed by Spain’s Iberdrola and Denmark’s Copenhagen Infrastructure Partners. The Bureau of Ocean Energy Management delayed the report’s release to study the broader impact of over a dozen wind farms from the Carolinas to Maine. BOEM decided to expand its cumulative impact analysis and concluded that approximately 22 gigawatts of Atlantic offshore wind development is reasonably foreseeable.

The analysis assumes big projects planned for New York, including the South Fork Wind Farm being built by Denmark’s Orsted for LIPA, Norway’s Equinor Empire Wind for New York State, and Orsted’s Sunrise Wind are part of that larger “cumulative” build out of offshore wind.

The analysis will have a 45-day public comment period. According to BOEM’s schedule, the final decision on Vineyard Wind is to be completed by the end of the year.

The Cost of Offshore Wind

Why Atlantic coast states are pushing offshore wind is a mystery since its generation costs three times the cost of generation from onshore wind or natural gas combined cycle technology. The result will be a burden on ratepayers that use the power or whose state requires that they pay for it regardless of use and taxpayers who foot subsidies to get builders to support offshore wind’s construction. But, without state mandates pushing its construction and operation, the offshore wind industry would probably not exist in the United States.

Energy costs in the UK have risen by 40 percent since 2015, according to research by comparethemarket.com. The average UK household pays a record £2,707 ($3,418 U.S.) in bills annually. According to a study by uSwitch, 3.4 million UK households live in fuel poverty and are unable to adequately heat their homes—1.6 million of these households will be forced to choose between heating their homes or putting food on the table. 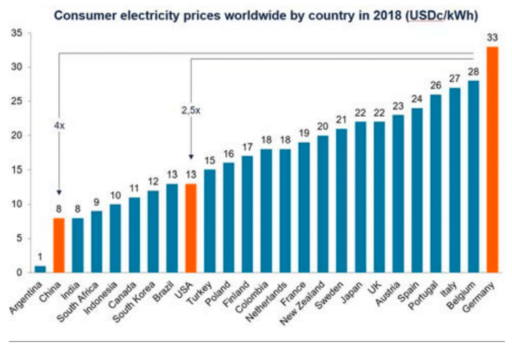 BOEM surprised the offshore wind industry with its announcement last year of the need for a supplemental environmental review that responds to complaints from the commercial fishing industry. That draft study was recently released and indicates the potential that offshore wind has for adverse impacts to the fishing industry, including recreational and commercial fishing and to marine mammals. A final decision will be made at the end of the year after public comment. Nonetheless, state lawmakers should be aware of the huge expense of offshore wind and the cost increases that will result to ratepayers and taxpayers from their decision to push the technology.