The NY Green Bank claims its financial performance has leveled out, which is true, but only if you ignore lots of stuff and a Level Solar collapse.

I’ve been periodically checking on the status of the NY Green Bank, Governor Corruptocrat’s slush fund for rewarding politically correct and politically connected crony corporatists, most recently about a year ago. It was losing money at an increasing rate and I sarcastically opined there was obviously nothing to worry about. Notwithstanding my bad attitude, the NY Green Bank has done better since then, but that’s only if you don’t career about rates of return, ignore the infusion of additional ratepayer/taxpayer funds and pretend there are no impending defaults.

Back in January of last year I noted the big NY Green Bank investment in Vivent Solar (VSLR) by a fat cat CUOMO donor by the name of Jim Simons, father of Nat Simons. He’s the man behind Renaissance Technologies LLC, which just happened to  buy some 493,455 shares of Vivent immediately prior to the announcement of the NY Green Bank deal. It turns out he got a nice temporary bump up in the stock price (probably as a result of the cash infusion) but the company is still languishing at sub-par stock prices as reflected in this Seeking Alpha chart: 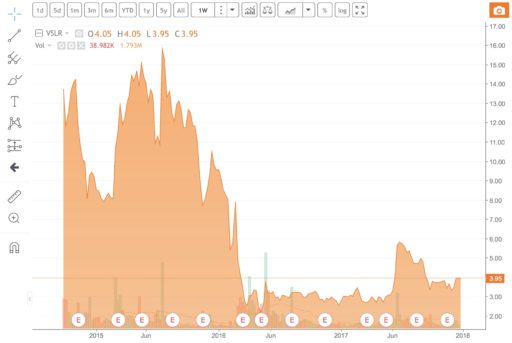 Will Vivent make it? No one can say but Market Realist says this:

Borrowings under the Subordinated Holdco Facility have an interest rate of 9.3% and mature in March 2020. This debt was used for solar energy system construction and acquisitions. The term loan into which Vivint Solar entered in August 2016 has an interest rate of 4.2%. The interest expense for the term loan was approximately $3.7 million for 3Q17.

One thing is for sure; VivenT Solar is no sure bet and that’s why ratepayers and taxpayers are the ones making the bet thanks to Governor Corruptocrat and cronies at the NY Green Bank. They’ve already made one bad solar bet on Level Solar. Here’s the story from NY Green Bank itself; from its latest quarterly report (emphasis added):

Level Solar closed its doors in September 2017, and NYGB worked closely with Level Solar’s shareholders to identify a third-party servicer to step in to service the residential solar PV systems in operation in order to ensure that the NYGB investment and Level Solar’s customers would be protected as much as possible in the wake of the company’s closure. On October 16, 2017 SUNation Solar Systems announced that it will provide complete services for all Level Solar customers. Under this arrangement, SUNation adopted responsibility for monitoring and servicing existing systems, managing billing without any changes to the current process, and providing support of any questions or service issues. SUNation representatives also reached out to all Level Solar Customers to ensure that this transition was carried out smoothly.

Notice there is no indication SUNation will pick up Level Solar’s loan payment obligations to the NY Green Bank.

The NY Green Bank’s quarterly reports don’t reflect financial performance, their latest results on that score being the March 31, 2017 financial statement, which shows an improving performance. That improving performance, though, doesn’t account for a $25 million loan default after two years. The cash position of the outfit would have also worsened but for a $150 million infusion of ratepayer/taxpayer funds from NYSERDA. Worst of all, NY Green Bank’s net return on investment was a measly 0.45% for the most recent year and -2.00% cumulatively, before accounting for the Level Solar losses whatever they may be.

So, the NY Green Bank has leveled out, just not the way it wanted.  Stay tuned.

1 thought on “NY Green Bank Levels Out, But Not Exactly the Way It Wanted”