Connecticut, the “Nutmeg State,” had a thoroughly nutty scheme to stop a Pennsylvania power plant from converting from coal to gas but EPA has crushed it.

Brunner Island Power Plant is located in York County, Pennsylvania, straddling Lancaster County. It is a huge, 1,490 megawatt coal-fired electric generating plant, and has been the target of environmentalists for years. In February 2017, MDN told you that the new owner of the plant, Talen Energy, invested $100 million to retrofit the plant so it can, at least part of the time, burn Marcellus Shale gas. Talen said it “plans to burn little or no coal until 2019 as part of a ‘site evaluation.’” Meaning almost all (perhaps all) of the fuel powering the plant at this point is Marcellus Shale gas.

This Marcellus Shale gas use is why we’re interested in this Pennsylvania power plant and what happens to it. However, it appears they still burn at least some coal from time to time. In February, Talen signed an agreement to settle a lawsuit brought by the odious Sierra Club. The terms of the settlement say Talen will burn only Marcellus gas at Burnner Island during “peak ozone season”–from May 1 through Sept. 30–starting in 2023.

Talen will phase out coal completely by 2028. But, all of that isn’t good enough for the state of Connecticut, which asked the federal EPA to shut down Brunner Island, permanently, claiming “computer models” show the plant is causing smog in CT. The EPA told CT to stuff it (emphasis added):

The U.S. Environmental Protection Agency has turned down Connecticut’s petition to force the Brunner Island power plant to cut down on smog pollutants the state claims heavily contribute to its unhealthy air.

Connecticut claimed that computer modeling of emissions showed that nitrogen oxide pollution from the much-criticized York County plant drifts into the state and is a major contributor to smog there.

Connecticut claimed it incurs $135 million a year in health-care charges from asthma attacks linked to smog.

In 2014, New Jersey had successfully used the Clean Air Act’s Good Neighbor provision to get a coal plant in Northampton County closed by EPA.

But EPA Secretary Scott Pruitt, under a federal court order to act on the Connecticut case, refused to intervene. He gave a number of reasons, including lack of proof that pollution could be traced to a single source that far away, according to a story in InsideClimate News.

Pruitt also noted that Brunner Island had recently invested $100 million so that natural gas could be phased in to replace more-polluting coal being used at the plant.

In a February settlement with The Sierra Club environmental group, Brunner Island owner Talen Energy agreed to stop using coal by the end of 2028.

In the meantime, the plant will stop using coal from May through September — the peak smog season — by 2023. The only exception would be during power shortage emergencies.

Talen Energy did not respond to a request for comment.

Editor’s Note: One suspects Connecticut’s nutty leaders are motivated more by ideological views and political correctness than anything else. After all, even though they’ve reduced electricity consumption significantly over the last several years (starting with the 2008 recession) the Energy Information Administration indicates they still used 28.9 million megawatt hours in 2016, about 5% below the average for the last two decades and their electric rates were 51% higher than Pennsylvania’s in March. So, it’s not like they don’t need additional sources of supply to be competitive if nothing else. Moreover, if asthma were their concern, the New York record suggests conversion from dirty fuels to gas is the solution, not the problem.

What’s also interesting is that Connecticut’s own last coal-fired power plant, the Bridgeport Harbor Power Station, is scheduled to be converted to natural gas. It’s apparently smart to convert Connecticut from coal to gas, but not Pennsylvania because it might impact Connecticut? And, how exactly would that impact be anything but hugely positive? If there is any need for evidence of the Nutmeg State’s nuttiness, it is this. But, the hypocrisy doesn’t end there because this is Connecticut natural gas use over the last two decades: 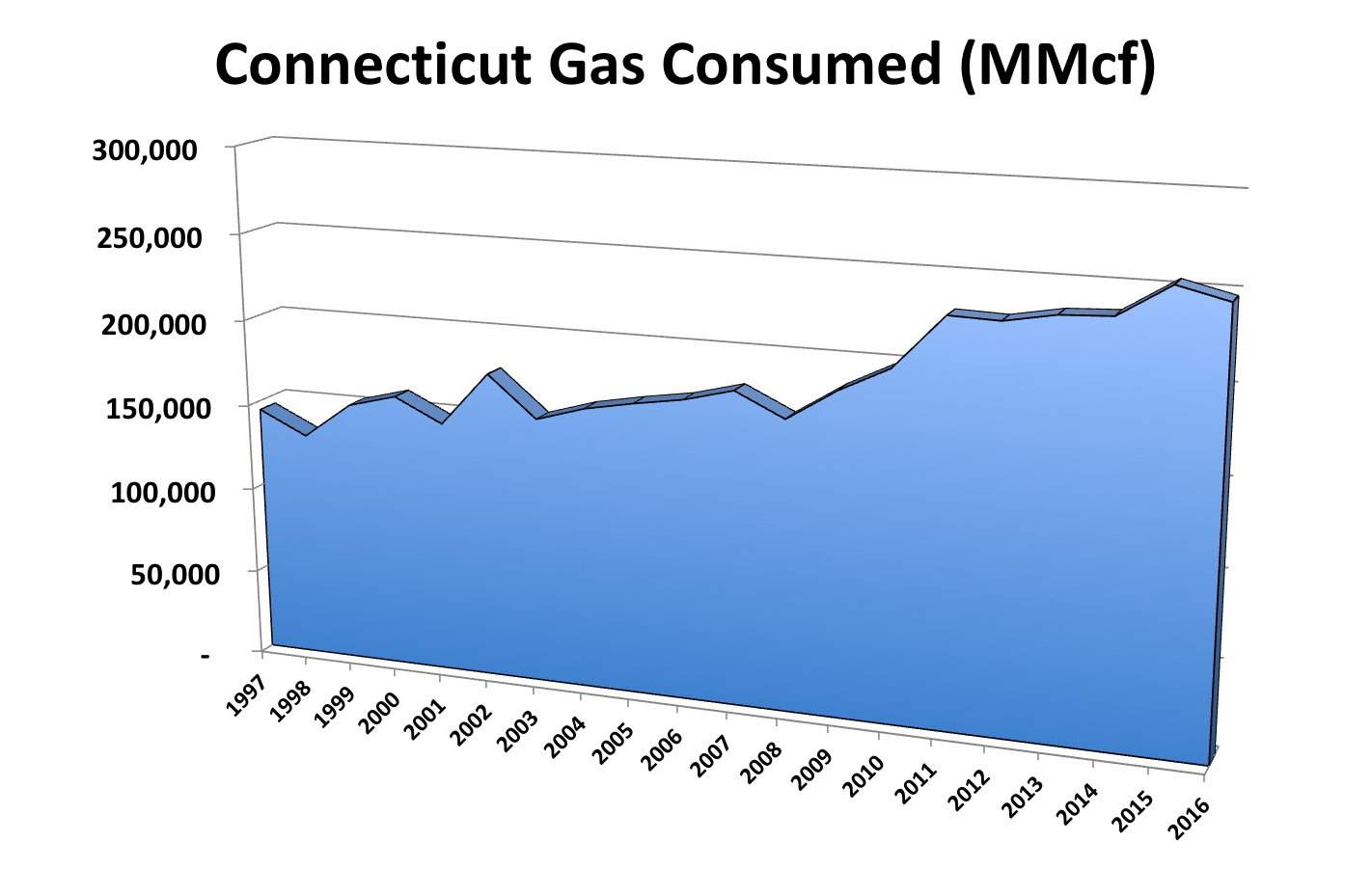 Yes, Connecticut consumed 247,175 MMcf of natural gas in 2016, up from 144,708 MMcf in 1997, for a 41% increase. They’ll need still more when Bridgeport Harbor converts to gas, of course, but they don’t want Pennsylvanians producing either the gas or the electricity. Such is the nuttiness of the Nutmeg State, where ideology and political correctness trump everything and electric prices continue to skyrocket as far as the eye can see into the heavens.