Potential peace talks with North Korea is encouraging the opportunist Kremlin to plan new pipelines into South Korea to reduce US market share.

President Trump’s meeting with the isolated nation of North Korea brings in a lot of potential hopes. Perhaps we can escalate tensions and military presence on the peninsula, maybe we can encourage the ruthless dictator to improve human rights, or perhaps, just maybe, we can reduce sanctions and become a trade partner with the North as we have with the South.

This week, I was skimming Facebook and saw a very sarcastic post come up from the Citizen Shale page. To refresh your memory, they are a delusional activist group that claims victory for leading Maryland to ban fracking. They are also very active in respond to comments and I love to poke the bear. (They mistakenly believe I am a secret Energy In Depth employee). The post uses a common theme in activism by suggesting President Trump is a Putin lackey. Not a big surprise, as this has been done since his inauguration. However, what sets the bar so low is their genuine misunderstanding or willful blindness with respect to the Facebook post. 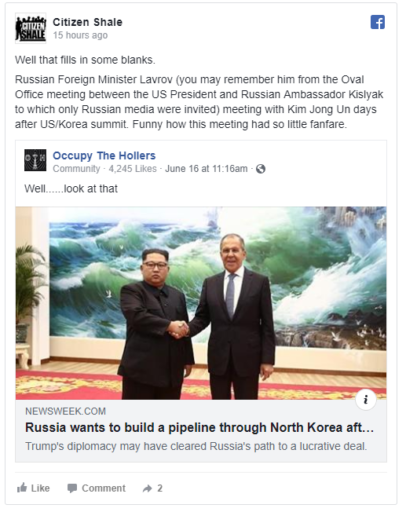 The post regards a Newsweek story on Russia’s plans to build a pipeline through North Korea following the Peace Summit. What Citizen Shale overlooks is that this is the introduction to a natural gas war, or rather, the continuous saga of one. North Korea was not just being hostile towards the US, but also their lower neighbors, South Korea – a big gas importer. The door for peace is partially being cracked open and opportunistic vultures like Putin are looking to gain some new market share on natural gas.

Just last Summer, I wrote about some big news from South Korea. South Korea’s President, Moon Jae-in made the decision to transition away from coal and nuclear energy. By doing so, their state-owned gas supplier, KOGAS, signed an estimated $25 billion, 20-year agreement for a liquefied natural gas from the US’s  Sabine Pass Liquefaction facility in Louisiana. This alone is just over 10% of South Korea’s annual demand and there are talks about adding more capacity to deliver more gas.

Ze Russian Bear wants a bite of the action. Losing market share on gas imports (except their clientele in the North East US), Russia has been fighting US natural gas on all fronts. What groups like Citizen Shale fail to admit is they are on Russia’s side. Russia and its state-run gas company, Gazprom, has been funneling money to activist groups for years to fight US natural gas production. Not only feeding the greedy money, the Internet Research Agency (IRA),  a Russian propaganda machine, most recently tied to “election tampering,” supplied fake Facebook profiles and memes cheering for renewables and encouraging the NoDAPL movement. Yet, it is Donald Trump that is supposedly tied to the Kremlin. 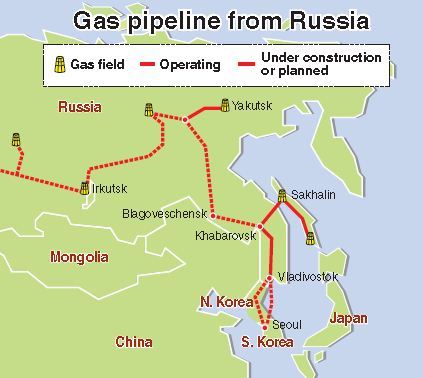 North Korea and Russia have long been friends and it is no surprise Gazprom is leveraging this monumental occasion to run a pipeline through the hermit kingdom and cross the DMZ in order to supply natural gas. The US may supply about 10% of the demand, but Russia wants to cut in and ensure our market share doesn’t grow. A pipeline could quickly deliver gas in steady supply without shipping it around the world. Ease of sanctions and starving labor forces could cheaply build the pipeline (with tons of quality and environmental assurances, lol) and lock down one more large client base to hold political pressures over as they have with Ukraine.

This is not a frivolous as many of the activists suppose. In fact, I blame a lot of this chaos on them. The willful ignorance involved in fighting against natural gas threatens landowner rights and encourages gentrification of low-income communities, fast becoming a worldwide problem. The more we bicker about nonsense facts, the more time Russia has to continue to strangle the world with political pressures while holding others’ energy and heat hostage.