Nonprofits are undermining our republic, abusing our laws and stealing from taxpayers to push green and other political causes padding rich pockets.

A good friend sent me a very interesting article the other day from a surprising source, the on-line journal Philanthropy Daily. The title of the post is “How NYC nonprofits use public money to promote their political agendas” and it’s a revealing look at how New York City taxpayers are funding nonprofits that then lobby them under the guise of being tax-exempt charities. It is based to a large degree on another article in City Journal titled “Radical Politics on the Public Dime,” which details the abuse. Neither article gets into energy issues, but they are both extremely instructive as to how the special interests of America’s plutocracy are affecting climate and energy debates. 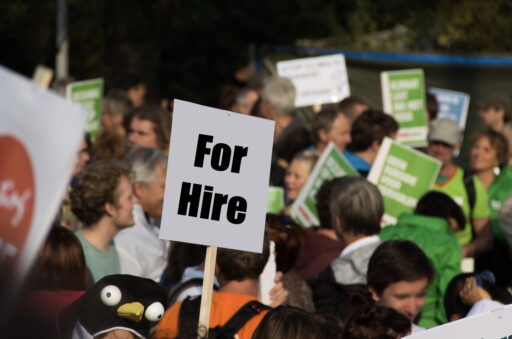 The next time you see people demonstrating against something, you should ask yourself this uncomfortable question—“Are they getting paid by the government?”

As associate editor of City Journal Seth Barron notes in his piece Radical Politics on the Public Dime, in New York City it is safe to assume that many of the people picketing against a government organization have some, and perhaps a majority, of their salaries paid for by local and state government.

“What most New Yorkers don’t realize,” Barron writes, “is that many of the protests…aren’t simply the work of civic-minded private citizens. On the contrary: they are funded, sometimes lavishly, by local and state government.”

He’s absolutely correct, of course. We have noted here many times that protesters who show up at climate change and fractivist events are often recruited on Craigslist and offered easy money to show up. Clean Water Action does this all the time, in fact. It is a Section 501(c)(4) organization authorized to do politics, so there’s nothing legally wrong with that, although paying protesters is about as unseemly as it gets.

But, Clean Water Action has a corollary group organization called the Clean Water Fund, which uses the same basic logos, offices and staff. The latter received $489,162 in government grants last year and the former acts as its paymaster with expenses allocated between the two, all of which means the taxpayer money it got was easily shifted around. Money is fungible and the pretense of two separate organizations doesn’t change that. This is the rotten manner in which tax-exemption is exploited by nonprofits.

There’s more, though. As City Journal notes, one of the primary beneficiaries of this innate corruption is a group named Make the Road New York:

But Make the Road’s real purpose, to paraphrase its mission statement, is to “build power through organizing.” Leaders of New York’s far-left Working Families Party run the group, which urges its clients to participate in political indoctrination as an implicit condition of receiving aid and encourages them to join as members. Make the Road’s legal structure and leadership closely overlap with Make the Road Action—a 501(c)(4) organization that properly engages in electoral activity and endorsing candidates—to which Make the Road regularly makes contributions in the six-figure range. New York Communities for Change, the successor organization to the disgraced Acorn, also receives money from Make the Road. Friedman and Chatterjee spun off a larger national organization, the Center for Popular Democracy, which receives millions of dollars in donations from the Open Society Foundations, the Ford Foundation, organized labor, and the Rockefeller Foundation—and which operates from the same street address as Make the Road Action, with which it shares overlapping leadership…Make the Road led the fight to prevent Amazon from locating a corporate headquarters in Queens. “This is a huge victory. We are thrilled,” exulted Make the Road co-executive director Deborah Axt after the tech giant pulled out, deciding that the headache wasn’t worth it.

The Working Families Party, in other words, is merely cover for the Rockefeller and Soros families, to pursue their very special interests in all sorts of things, among which are scamming the public through green energy rent seeking, making good on investments in China and creating political systems they can dominate. I wrote about the Working Families Party here and explained:

The Working Families Party has, from the beginning, been a scam… and the truth about the organization’s goals was acknowledged in a June Village Voice article as the party opted to support Bernie over Hillary:

“From the WFP’s genesis, there was an uneasy alliance between organized labor and the grassroots activists undergirding the party. Its founder, Dan Cantor, is a true believer, a cerebral operative who once worked for Jesse Jackson’s presidential campaign. Working under Cantor is Bill Lipton, the sharp-elbowed New York State director, another progressive who was ready for a Bernie Sanders insurgency years before it happened.”

“For Cantor, Lipton, and other progressives in the organization, the dream is a political revolution…”

Given this background, it was hardly a surprise that, when it mattered, Dan Cantor opted for Bernie and a radical anti-Exxon campaign. He was there, after all, at that treacherous gathering of the LaJolla Junta, when the whole idea for the rackateer-like attack on Exxon was hatched. See, also, this much earlier story. We pointed out, long before everyone else was into exposing the whole #ExxonKnew fraud, that Attorney General Eric Schneiderman was a NRDC capo. We were, in fact, the first to call the La Jolla confab a racket.

The Working Families Party was part of that racket. It was right there, at the center of the action, in a supporting role to NRDC co-founder Richard Ayers. It wasn’t about working families at all, but, rather, implementing the elitist agenda of the Rockefeller family, to which Ayers and John Adams, the other co-founder, were dedicated. The party even hired Fractivist Rasputin Jay Halfon, he of trial lawyer fame and a Rockefeller bat boy, to be on its legal team, a “close friend and regular informal advisor” of Working Families Party Executive Director Dan Cantor. Indeed, the LaJolla Junta gathering to plot their plans for advancing their agenda by criminalizing speech was financed by, among others, the V. Kahn Rasmussen Foundation, one of Bill McKibben’s (of 350.org) major funders. Both the Rasmussen Foundation and 350.org are closely associated with the Rockefeller family, the force and the money behind the NRDC gang.

The spider role of Jay Halfon in helping to create this web of deceit helps answers the question of why these folks engage in such chicanery. The Rockefeller motivation is easy to explain. It’s about their land deals, their trust-funder quilt complexes and the power. For trial lawyers such as Jay Halfon, it’s about the money. Halfon lives in a hugely expensive apartment in Manhattan. He’s made out extraordinarily well playing toady to the Rockefllers and the Park family by serving on the boards of their shill organizations and being their point man. He uses his NY-PIRG and Trial Lawyer Association connections as a way to make things happen for them and set up lawsuit opportunities for his friends in the class action ambulance chasing bar.

And, this is what our public supports with tax-exemptions for nonprofits. But, it’s even worse as I pointed out in another article five years ago:

Still, this isn’t the worst of it, because the NY-PIRG got a sweetheart deal from Attorney General Andrew Cuomo before he left office to become Governor of New York. He gave them a whopping $10 million, according to the Wall Street Journal.

“On his last day as attorney general, Mr. Cuomo announced he awarded NYPIRG, which has had a contentious relationship with other recent governors, a $10 million grant for a national ad campaign to help promote NYPIRG’s higher-education activities. The money, more than twice the group’s annual budget, came from Mr. Cuomo’s settlement of a student-loan probe.”

Yes, Cuomo gave the NY-PIRG $10 million to spend promoting their radical special interest agenda. No doubt they’d say its a separate fund but money is fungible and we know what the NY-PIRG’s “higher-education activities” consist of, don’t we? Talk about stuffing the  PIRG! Talk about rainmaking!

Yes, Jay Halfon, the Fractivist Rasputin is everywhere when it comes to exploiting the tax-exemption of non-profits to advance the Rockefeller agenda. That agenda includes many things and opposing natural gas development and making wilderness playgrounds is part of it. Some of the wealthiest people on earth are scamming us all, using nonprofits as facades to exercise political influence while stealing from the treasury to lobby for more stealing from the treasury. I’m glad to see Philanthropy Daily and City Journal are now on the case with NaturalGasNOW. There’s a great train robbery taking place and all of us are needed to stop it. We also need some leadership from politicians and industry who have long known what’s going on and have done nothing to halt it.