It’s now clear the Delaware River Basin Commission (DRBC) has been playing a wretched game the last seven years and Pennsylvania should zero out its funding.

There’s currently a lawsuit underway challenging the authority of the DRBC to regulate land use — specifically, the development and operation of gas well pads in the basin. It has huge implications for the agency. I serve as the Executive Director of a railroad shippers group granted the privilege of offering an amicus curiae brief in the matter. As the case has proceeded, I’ve watched, with great interest, the DRBC’s reaction. It has been to obfuscate and pretend the organization has never stood in the way of permitting gas drilling despite the seven years it has sat on draft regulations it clearly has no intention of ever acting upon. The DRBC has made the case for Pennsylvania that the Commonwealth ought to zero out any funding it is giving the agency. 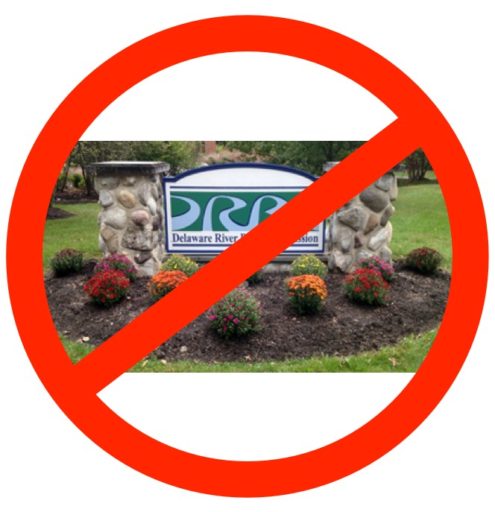 What’s become more than obvious during the legal proceedings to date is this; the very idea of DRBC regulations governing gas drilling in the basin is but a stall tactic to avoid making any decision, with the goal of perpetuating a moratorium indefinitely while pretending there isn’t one.

Indeed, the agency has represented in open court that there is nothing to stop an applicant from requesting permits today, despite what it acknowledges is an “effective moratorium.” It’s absolutely bizarre until you think about it and realize the agency is only doing what any worm will do in the face of electric shock; move away.

That was what motivated the DRBC to cancel their vote on regulations in 2011, after all, They didn’t want the pain of dealing with Maya and preferred to simply let her get away with bringing things to a halt. Their Executive Director, Carol Collier, being a fellow traveler with the Povertykeeper, was only too happy to cooperate. Now that there’s pain coming from the other direction, the DRBC is desperately trying to maintain two fictions at once; that it is still actively working on regulations, albeit with no end in sight, and that permits could be issued now anyway despite its moratorium.

The two positions are both unsustainable, a fact becoming more and more apparent as the lawsuit proceeds. The DRBC maneuvering, though, has served to reveal something every Pennsylvania legislator needs to know. The DRBC, like its sister agency, the Susquehanna River Basin Commission (SRBC), where most of the Commissioners are the the same individuals, could have been issuing permits for water withdrawals and the like all along without any additional regulations and without regulating gas drilling itself, which is a land use activity, not a water project. The DRBC exercise has been one gigantic sham intended to deprive some Pennsylvanians (New Yorkers, too, but they have an additional obstacle in Prince Corruptocrat) of their rights to economic development of their natural resources.

This is why Pennsylvania shouldn’t be giving the DRBC so much as a nickel until it ends this sham. Two years ago I made the pitch it didn’t deserve another dime until it approved regulations, but that was far too generous. They don’t deserve anything and their funding shouldn’t depend on adopting regulations but, rather, on formally ending their moratorium and adopting an identical procedure these same individuals use when they’re operating as the SRBC. That is to say the DRBC doesn’t need any more regulations but should simply acknowledge the SRBC got it correct by regulating water only and proceed to do the same, acknowledging their sister agency has successfully protected water quality and developed a track record proving this is the proper approach.

All of us have been so focused on the trees (the regulations) we’ve lost sight of the forest (DRBC’s limited authority). All the talk over the years about its different obligations has been a complete sham. The DRBC was never intended to be a land use regulator and Pennsylvania’s refusal to confront that simple reality has enabled the sham. Pennsylvania didn’t sign over its citizens’ rights or its own sovereignty when it entered into the Delaware River Compact and it has no obligation to fund an agency that supposes otherwise and tramples all those rights.

Yes, it’s time to zero out the DRBC funding from Pennsylvania’s budget. What possible excuse, at a time when Pennsylvania faces extraordinary budget challenges, is there for squandering money on an agency that refuses to perform and condemns some Commonwealth landowners to second-class citizenship? It is the responsibility of our legislators to demand an end to this outrageous chicanery by exercising the Commonwealth’s funding leverage.

Not a dime, not a nickel, not even a penny until this regulatory farce is ended and the DRBC tells the world it is adopting the very successful approach it used when wearing its SRBC hat. Let them get their money from William Penn Foundation which funds the attacks on their agency and on us if they’re so damned determined to please that reprehensible outfit.

Meanwhile, for those readers who agree and haven’t done so, please think about signing our petition. It already has 388 signers. Let’s make it 400+ and counteract that ridiculous ginned up event Maya is planning tomorrow for their meeting. Enough already!

4 thoughts on “No More DRBC Funding Without Permits – Absolutely None!”