Despite the best efforts of its fractivists New York has become a net exporter of natural gas to Canada. Now, imagine the possibilities, if only…

I hesitate to offer this story as it will undoubtedly only fan the flames of folly erupting over the baseless speculation of fractivists that the proposed Port Ambrose import facility off the coast of Long Island is really an export facility in disguise, but the facts are too fascinating too ignore. New York State has already become a net exporter of natural gas – to Canada. Moreover, it’s Marcellus Shale gas that’s being exported. Imagine what this would mean if New York allowed the Southern Tier to develop that gas!

The fact New York is now a net exporter of natural gas was revealed by the Energy Information Administration (EIA) on Monday with this chart and explanation (emphasis added):

Although additional supplies from the Cove Point terminal in Maryland, which began operation in 2003, alleviate demand for imports from Canada in this state, imports from Canada in the Northeast continued to rise until 2007, when the United States began producing more shale gas. With increasing production in the Northeast, the United States began exporting natural gas from the Marcellus Shale to Canada in 2011, and natural gas imports fell to new lows.

A major development in the Northeast was the completion of the Northern Access Expansion Project in late 2012, which increased delivery capacity to Canada by 320 MMcf/d, crossing the Niagara Falls exit point in western New York. In 2014, New York became a net exporter of natural gas to Canada.

Hard to believe, isn’t it? It demonstrates something we too easily forget in the chaos of fracking debates; economics cannot be denied for long. Marcellus Shale is also arguably saving Western Civilization by fundamentally transforming trade and our dependence on others, not that Canada isn’t a friend, but many other suppliers of imported gas are not. 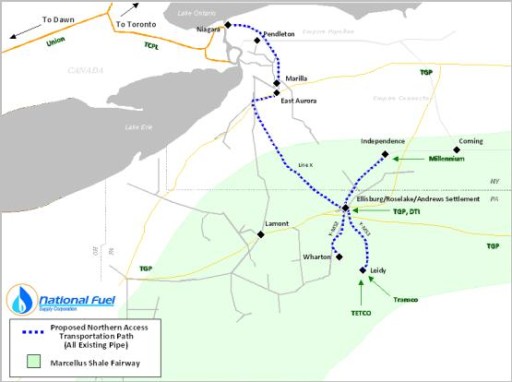 Other takeaways? Well, consider the fact New York could be its own supplier of natural gas and not even depend on Pennsylvania, not to mention Canada or other countries, for its gas. Also, notice how pipelines serve to meet our energy needs and allow for delivery of product where needed, when needed and at a competitive price. What’s not to like about that?

The developers of Port Ambrose have positioned themselves as an alternative to fracking New York, but the reality, counter to that self-serving and shallow posturing, is that New York needs it all – fracking, pipelines and import facilities – and fractivists want to deny New Yorkers all three to satisfy their own narrow and craven ideological goals. They won’t be successful in the long-run, though. The laws of economics always prevail in the end. After all, New York is already a net exporter of natural gas.