A quick look at stats illustrates why New York natural gas prices are so high and spike even higher at times of peak use; it’s about the lack of pipelines.

One of our astute readers commented the other day about the need to document the cost of pipeline delays to average New Yorkers. It prompted me to visit the Energy Information Administration (EIA) natural gas page to research things a bit. There are statistics galore there to study. I focused on two states, New York and New Jersey, and three sets of data. These included natural gas consumption, pipeline inflow capacity and prices. It quickly became clear why New York natural gas prices are so high and why those numbers skyrocket during periods of peak use. New York State needs more pipeline capacity.

Here’s an excerpt from an EIA news release back on January 10 reflecting on the previous week (emphasis added):

Some of the largest price increases during this period occurred in the Northeast. Prices at the Algonquin Citygate and Transco Zone 6 NY trading hubs, which serve the greater Boston and New York City markets, respectively, reached near-record levels. The spot price for delivery at the Algonquin Citygate reached $82.75 per million British thermal units (MMBtu) on January 5, 2018, which was slightly lower than the record of $84.22/MMBtu reported in January 2004, real adjusted 2017 dollars. The Transco Zone 6 NY price reached $140.52/ MMBtu, topping records reached during winter 2013-14.

And, here’s the accompanying self-explanatory chart: 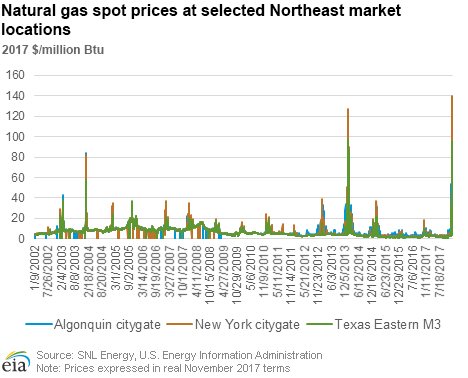 Those peak prices matter. They raise average gas prices and one can see the New York citygate peaks have worsened in recent years. Average New York natural gas prices since 2009 have, likewise, gradually diverged by ever greater amounts from those in neighboring New Jersey as the following chart depicts: 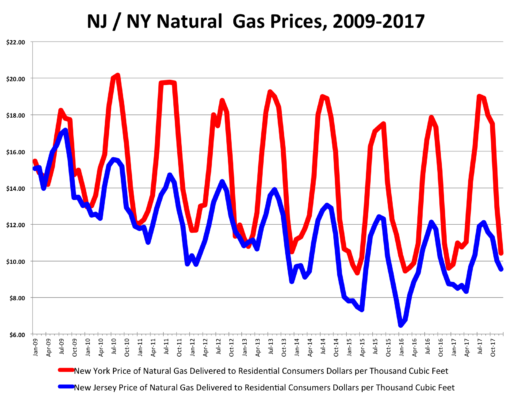 These higher New York natural gas prices occur because of shortages, of course. Yet, New York is next door to the Marcellus Shale region, where the shale revolution has produced huge supplies of natural gas easily accessible from New York but for pipeline capacity.

How do we know this? Well, take a look at this chart, which shows consumption trends versus pipeline inflow capacities with respect to the two states (complete consumption data only available through 2016): 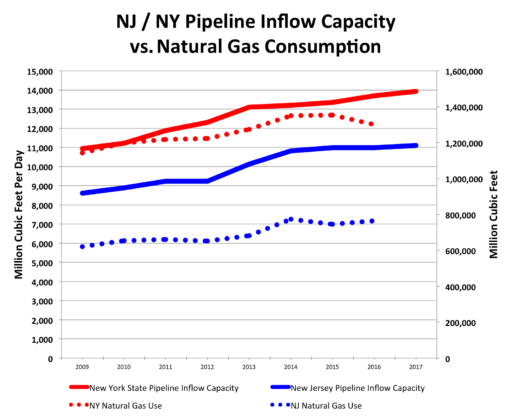 What this chart demonstrates is that the relationship between consumption and capacity in New Jersey is one that allows a buffer to accommodate periods of peak demand, whereas in New York there is much less room to accommodate unusually high demand peaks.

This is why New York city natural gas prices reached $142 for a moment in January and the state needs more pipelines, despite its corrupt governor trying to appease the NRDC gang by opposing them.

It’s also why New Jersey’s Rate Counsel and Massachusetts is making a huge mistake in opposing the PennEast Pipeline that would ensure New Jersey preserves its insurance against such high natural gas prices.

2 thoughts on “Why New York Natural Gas Prices Are So High: It’s About the Pipelines”