New York health has been the subject of lot of attention recently but no one’s talking about how shale gas is already IMPROVING the health of New Yorkers.

A recent comment on our blog motivated me to do some checking on the current health status of New York State, the Governor of which seems to think fracking is what he ought to be worried about. What I found was that the state ought to be looking in the mirror first.

The world’s biggest health threat, at least in terms of things we can control, is pollution from particulate matter and, more specifically, particulate matter under 2.5 microns in size. That point was made very effectively in the Muller study released last year, which noted “Shale gas, with its near-total reduction of PM<2.5 pollution provides a solution to the pollution.”

New York has a serious air pollution problem if anyone from the Department of Health had bothered to check its own statistics. The state’s most recent Asthma Surveillance Summary Report, for example, includes this table:

Those stats are pretty stunning for anyone with a child suffering from asthma. New York State has super-high asthma emergency room visits for children aged 0-4 years and the rate keeps going up.

The report goes on to provide some other very important pieces of information:

This data tells us New York City is the worst place to be in New York State for childhood asthma and elsewhere in the report it’s noted Broome, Chenango and Tioga Counties, as a region, have the lowest crude and age-adjusted asthma emergency department visit rates per 10,000 residents (see page 72). Here’s a little map to illustrate: 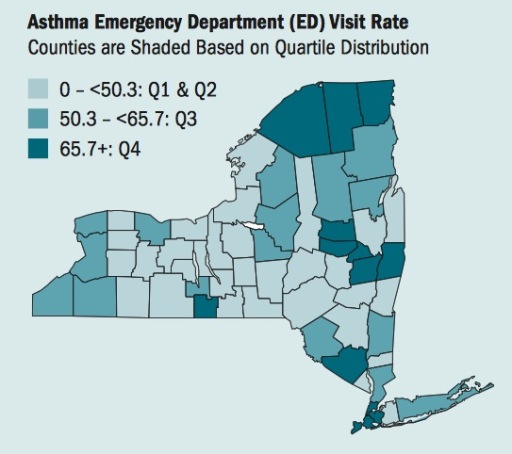 The map indicates there are some other pockets of higher asthma rates, including, for example, the North Country, where Census statistics on house heating fuels indicate they burn a lot of wood. Western New York has also had coal burning power plants that no doubt impacted things there, but the one in Dunkirk has recently shifted to much cleaner natural gas, so we can expect to see improvements there going forward.

New York City can also be expected to see improvements and provides a laboratory for illustrating why the state should be favoring shale gas development as a method of reducing air pollution and asthma rates going forward. The city has had the highest asthma rates because, among other reasons, it has traditionally generated most of its heat and power using coal and heavy fuel oil. Mayor Bloomberg set out to change that several years ago and succeeded.

The New York City Health Department has documented the problem with this report, which indicates the following:

Health Department estimates show that each year, PM2.5 pollution in New York City causes more than 3,000 deaths, 2,000 hospital admissions for lung and heart conditions, and approximately 6,000 emergency department visits for asthma in children and adults. A modest reduction of 10% in current PM2.5 levels could prevent more than 300 premature deaths, 200 hospital admissions and 600 emergency department visits annually, while attaining the goal of “cleanest air of any big city” would result in even greater public health benefits (Table 1). 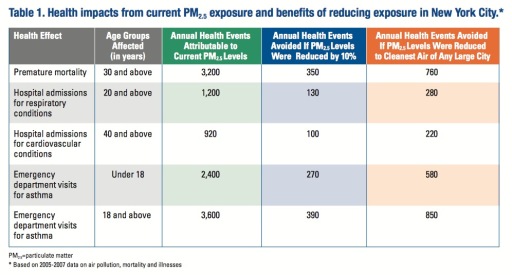 Here’s what the New York City Air Quality Plan had to say about it (before radical Mayor Bill DiBlasio took over and removed the plan from the City website): 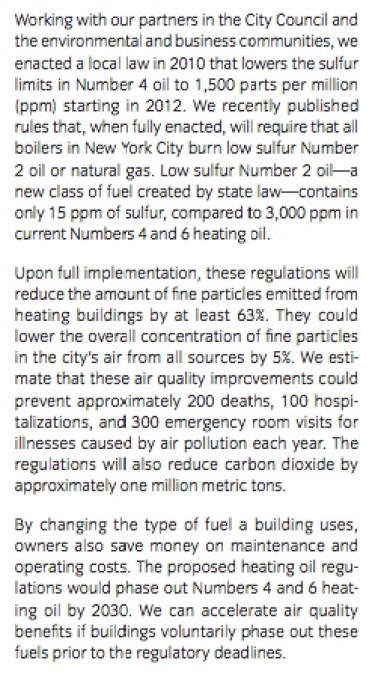 Former Mayor Bloomberg also continues to maintain a website where he talks about it with these words:

Mayor Bloomberg today announced New York City’s air quality has reached the cleanest levels in more than 50 years, with dramatic reductions in pollutants in the air since the launch of the Administration’s comprehensive, long-term sustainability blueprint, PlaNYC. “…since 2007 the level of soot pollution (PM2.5) has dropped by 23 percent. The largest contributor to the reductions is the PlaNYC’s Clean Heat program, which phased out use of the most heavily polluting heating oils in New York City…

“In 2007, our PlaNYC agenda set an ambitious goal of having the cleanest air among the largest U.S. cities,” said Mayor Bloomberg. “Today’s results show that we have already made major progress towards that goal, which is saving lives and improving the health of New Yorkers…

Three changes contributed to the winter season air quality improvements over the past several years. Only three years ago, nearly 10,000 buildings in New York City burned Numbers 4 and 6 heating oil, which emit significant amounts of PM2.5, sulfur dioxide (SO2), nickel and other dangerous pollutants. Through the efforts of the NYC Clean Heat Program, over 2,700 buildings have converted to cleaner fuels since 2011 and an additional 2,500 buildings are actively pursuing conversions. Second, additional emission reductions have come from State rules that limited the sulfur content of #2 heating oil to 15 parts per million (a 99 percent reduction) and City rules restricting the sulfur content of #4 oil to 1,500 parts per million (a 50% reduction). Third, the expansion of the regional natural gas supply and local gas distribution infrastructure operated by Con Edison and National Grid has encouraged buildings to save money and reduce emissions by converting to natural gas…

In 2005-2007, it’s estimated that PM2.5 levels in New York City contributed to over 3,100 deaths, over 2,000 hospitalizations for cardiovascular and respiratory disease, and 6,000 emergency department visits for asthma annually. Today, because of the significant improvements in air quality, the health department estimates that 800 lives will be saved each year and approximately 1,600 emergency department visits for asthma and 460 hospitalizations for respiratory and cardiovascular issues will be prevented every year. The City expects further improvements in air quality and the future health of all New Yorkers as buildings continue to convert to cleaner fuels over the next several years.

That’s the story Howard Zucker never considered; how natural gas conversions (and virtually all of NYC’s natural gas supply today is tracked gas from shale in nearby Pennsylvania) have contributed to real tangible health gains for New Yorkers and how more inexpensive shale gas development within the state would not only continue the progress but make it sustainable by equipping New York with its own supply.

But, City residents aren’t the only ones who benefit. The State Asthma Surveillance Report also noted the relationship between income and childhood asthma rates, which is no coincidence. Health outcomes are always better in areas with stronger economies and among households with higher incomes, because income increases access to health care for everyone regardless what system is used to deliver it a point that is manifest in the data from the Barnett Shale region.

Yes, money is what it takes to deliver high-quality health care and while money doesn’t grow on trees, it is found in rocks such as the Marcellus and Utica Shales and Upstate New York has both. That Upstate New Yorkers are prevented from harvesting natural gas that would mean higher incomes and better health care for them while delivering clean natural gas to save lives in New York City is a damned shame. That it was done for the shallowest of political moves on the basis of the shoddiest junk science is a damned crime.