New York energy policy under Andrew Cuomo is based on intermittent solar and wind and it’s going to create a bill to consumers that could top $47 billion!

On December 9, 2019 the Citizens Budget Commission (CBC) released a report entitled Getting Greener: Cost-Effective Options for Achieving New York’s Greenhouse Gas Goals  that addresses the impacts of the Climate Leadership and Community Protection Act (CLCPA).   There is much to like about the report but I disagree with a few of their recommendations and have concerns about some of the methodology.

If you have an interest in New York energy policy I recommend that you read the entire document.  It is well written, comprehensively covers many of the issues associated with the CLCPA, and makes estimates of the resources needed to implement the CLCPA.  My first post discussed their findings, the second post addressed their renewable energy forecast to meet the CLCPA and the final post calculated the New York energy storage requirement for an example winter peak period.  The numbers and analyses described in this summary are documented in those three posts.

The CBC is a nonpartisan, nonprofit civic organization whose mission is “to achieve constructive change in the finances and services of New York City and New York State government”.  They claim to serve the public rather than narrow special interests try to preserve public resources, whether financial or human; and focus on the well-being of future New Yorkers which they say are “the most underrepresented group in city and state government”.

The CBC Energy Policy Committee managed the development of the report.  It was prepared for CBC by Seth Hulkower, President of Strategic Energy Advisory Services.  Apparently, this project has been in the works for a long time because the “initial findings of this report were presented at a CBC research conference held in New York City in December 2018”. The report was not completed until December 2019 because of changing New York energy policies over the past year.

In particular, the Climate Leadership and Community Protection Act (CLCPA) was promulgated in July 2019. They made revisions based on feedback from external reviewers and staff at the Public Service Commission and the New York League of Conservation Voters but noted that their willingness to assist in the research does not “imply any endorsement of the report’s findings and recommendations”.

In my post on the CBC findings quoted summary with my annotated comments.  The CBC findings support my position that the State needs to do a feasibility study to determine how the CLCPA could be implemented. The 2040 requirement to eliminate the use of fossil fuels by 2040 will require enormous investments and their findings point out the financial and flexibility risks if those investments are funded incorrectly.

They also raise the concern that existing sources of nuclear and hydro zero emitting generating power are not currently encouraged to remain in operation and suggest that discouraging natural gas infrastructure is counter-productive.  The final finding is the observation that there is much work to be done to implement the CLCPA targets for other sectors.  I agree with all these concerns.

The report makes a number of recommendations.   I agree the State should prioritize investments based on performance, look beyond New York for additional sources of reduction support, eliminate self-imposed constraints on natural gas use, and retain our existing nuclear energy capacity as long as possible.  I do not think that a carbon pricing system will work if it only applies to New York or a limited region so I disagree with their recommendation for one even if it is across all sectors. Their transportation recommendation to think beyond electric vehicles for reductions makes sense where public transit investments could be cost-effective but that precludes rural areas.

The CBC report is useful because it provides an estimate of the renewable resources required to meet the CLCPA 2040 fossil-free electric sector target.  The State has not admitted that 2040 load is going to be substantially higher than the current levels but this report makes a compelling case for a significant increase in annual load.  Their results indicate that “as New York moves to a path of decarbonizing heating and transportation in New York, the total electric demand will rise to 211,100 Gwh by 2040. To serve that demand with 100 percent non-emitting resources, nearly 94,000 Gwh of additional renewables will need to be added, a total that is roughly double the amount to be added from offshore wind (37,800 Gwh) and distributed solar (8,400 Gwh) now set by the CLCPA.”

I used their projections of the resources needed to meet the energy requirements (GWh) to estimate the power capacity (MW) needed.  As shown in the CBC Forecast of 2040 Capacity (MW) Resources to Meet CLCPA Goals table below I calculated that New York would have to build 11,395 MW of residential solar, 16,117 MW of utility-scale solar, 18,457 MW of on-shore wind and 16,363 MW of off-shore wind to meet the increased load estimated by CBC. 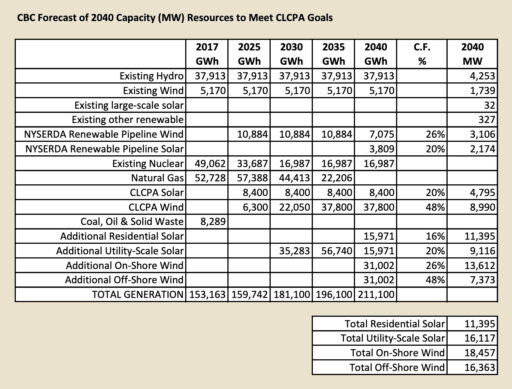 I put those numbers in perspective.  For residential solar I used the rule of thumb that you need 66 square feet to generate 1kW of solar energy and that would require 36 solar panels.  That means that nearly 27 square miles of residential roofs would have to be covered by over 364.6 million solar panels to meet the 11,395 MW estimate.  For utility-scale solar I found a recent application that showed that each MW of utility scale solar will cover 7 acres so 112,816 acres or 176 square miles will be needed to meet the 16,117 MW of utility scale solar output estimate.

I do have one concern about the CBC forecast of resources to meet CLCPA goals.  In order to make a better estimate of the resources it is necessary to look at peak periods rather than just annual loads.  It is inappropriate to assume that a “smart” grid and more energy efficiency is going to eliminate electric load peaks so that they do not have to be considered.  Residential heating and transportation electrification will impact the winter peak very likely shifting the annual peak to winter simply because you cannot shift heating when it is very cold.   However, it is unfair to ask the CBC to address the winter peak expected load because it is a very complicated problem and would take a lot more effort.

I took a look at a winter peak period renewable resources derived from the CBC forecast.  I made a first cut attempt to estimate the capacity necessary to meet future energy load but I made a crude assumption that the peak load could be met with the resources needed to meet the annual energy estimate.  The results shown in the January 3-4 2018 Winter Peak With CBC Forecasted 2040 Capacity Resources to Meet CLCPA Goals table are influenced by the assumptions I made for off=shore wind turbine output because there were two no-wind energy output periods during the two-day winter peak period I analyzed.

I was surprised to see the wind resource went to zero not only when the winds were light on January 3 but also when a deep low pressure developed and the wind speeds exceeded the upper wind speed cut-off I used on the very next day.  As a result of these conditions, there were twenty hours out of 48 hours that the output from all the resources available to New York in the CBC scenario for 2040 were negative and would require energy storage to keep the lights on, homes heated and vehicles charged.

If the state goes ahead to build the amount of renewable energy that the CBC estimated would be necessary to meet the 2040 goal, it still does not preclude the need for New York energy storage.  The table with the January 3-4 data shows that there was a fifteen-hour period from January 3, 2018 at 1600 until January 4, 2018 at 0600 with hourly storage deficits totaling 134,545 MWh.  I used that period to calculate the amount of storage needed.

The Estimated Energy Storage Required and Potential Price Necessary to Prevent Deficit on January 3-4 2018 table summarizes the energy storage needs and my projection for the amount of different duration energy storage systems needed.  Finally, I adapted the results from the NREL study to estimate the cost of this amount of storage.  The table lists the estimated cost for the energy storage necessary to meet this winter peak period at a staggering $47 billion. 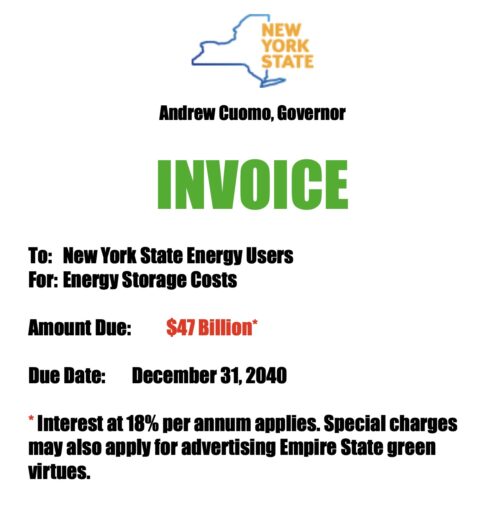 Although I am not on board with the CBC’s desire to do something because it is “necessary”, I think it is important that an organization that feels that is necessary realizes the magnitude of the effort and the very real possibility of massive future financial exposure.  The CBC report underscores the potential that doing something wrong would not be in the best interests of the State no matter how noble the intention.

There is great value in the estimate of future New York energy use provided in the CBC report because the State has yet to provide their estimates.  Although I think that there are limitations to their analysis, I also think they have erred on the conservative side.  The actual resources needed for peak period planning could well be substantially higher.

I need to re-iterate the inescapable conclusion that over-building more wind turbines or solar cells does not preclude the need for substantial energy storage.  The cost of the energy storage using LI ion batteries needed to meet an example winter peak period is estimated to be $47 billion dollars.  That value is probably conservative because of limitations on the operating range to extend life expectancy out to ten years.  The size of the numbers shown is sobering and cries out for an “official” projection from the State.

I can only conclude that the State of New York must do a feasibility study to refine the CBC analysis of future renewable resources needed as soon as possible.  The analysis has to be detailed enough that New York energy storage requirements can be projected so that a full cost estimate of compliance with the CLCPA can be estimated.  In the absence of this analysis the State could well be headed down a financial sinkhole that will do much more harm than good.

Editor’s Note: Roger also notes the CBC “Getting Greener” report, which is about much more  than how much more green cash will be required from New York consumers to signal Andrew Cuomo’s green virtues, also states this uncomfortable fact (emphasis added):

“State policies on nuclear, natural gas, and hydropower are counterproductive. First, the state’s six nuclear power plants are scheduled to shut down between 2020 and 2046. Elimination of the nuclear fleet will erase nearly all previous emissions gains as that power supply by necessity will likely be replaced in the near-term by natural gas, which produces greater emissions than nuclear power. Second, attempts to expand natural gas pipelines have been blocked, which resulted in moratoria on new gas installations downstate. Natural gas provides an economical alternative to dirtier fossil fuels and is a dependable source when renewable sources like solar and wind are not available. Third, while hydro is a key renewable resource, state policies have not supported use of hydro when construction of a new dam is involved, limiting the ability to access additional affordable and clean power from Canada.”

Whoa! Will someone in the New York legislature wake and realize they’re on the road to ruin with these New York energy policies?

7 thoughts on “New York Energy Bill from Cuomo to Consumers Could Top $47 Billion!”