New England is facing a bleak energy future according to its electric grid operator. Gentry class fractivists are stealing it blind as they kill pipelines.

Last December, Spectra Energy pushed the pause button on their Access Northeast Pipeline project, a roughly $3 billion project in New England to connect four existing pipeline systems (with enhancements). These included the Texas Eastern, Algonquin Gas Transmission, Iroquois and Maritimes & Northeast Pipelines. Spectra’s original strategy was to bring natural gas to New England by cutting deals with electric companies who need the gas to produce cheaper electricity at their natgas-fired power generation plants. However, gentry class fractivists came out in force against the plan, (sadly) aided and abetted by Spectra’s competitors, and those plans are now in ruins with three states blocking any such plans. 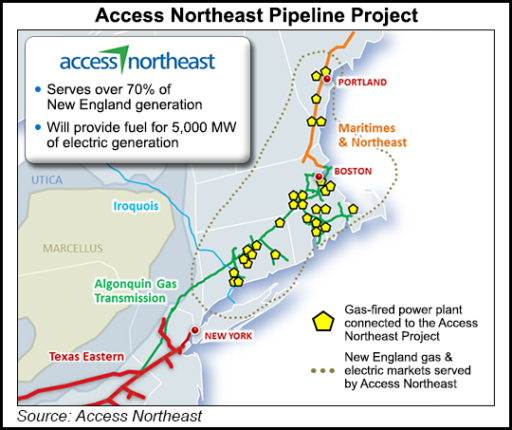 Spectra, at last word, had changed strategies, targeting local natural gas distribution companies (LDCs) as potential customers. The company needed customers to sign on the dotted line, committing to long-term contracts, before they can raise the funding and build the project, so they pushed the pause button last December. Since that time, though, Spectra completed selling itself to Enbridge. So, just to confuse things, the Access Northeast project is now an Enbridge project.

Last week, Enbridge sent a letter to the Federal Energy Regulatory Commission, the agency that oversees such projects, to officially withdraw the application. But the project is not dead. Enbridge says they will be back to file again — once the New England states get their energy policy crap together.

Specially, Enbridge says in its letter to FERC (emphasis added):

At this time, Algonquin has determined that it is appropriate to withdraw from the FERC Pre-filing review process until the gaps in energy policy in the New England States are resolved. Algonquin will continue working with state and federal agencies, as well as other stakeholders, to help address the energy policy inconsistencies that are currently preventing the region from achieving significant reliability and cost benefits from the utilization of affordable and environmentally friendly and reliable energy resources. Once such alignment is achieved, Algonquin will proceed with plans to bring the Access Northeast Project to New England consumers and to re-engage in the Commission’s Pre-filing review process. Furthermore, two of New England’s largest utilities, Eversource and National Grid, remain committed to the New England region, and specifically to the Project.

Fake news source Boston Globe tries to spin the news as Enbridge and the other partners in the plan don’t have enough money to build it. Horse manure. It is onerous, intentional regulatory and legal roadblocks placed on the project that are preventing it from attracting customers and getting built. Enbridge says when that situation improves, they’ll be back. Our prediction: They have a long wait. Maybe after New Englanders experience their first widespread blackout their attitudes will change. 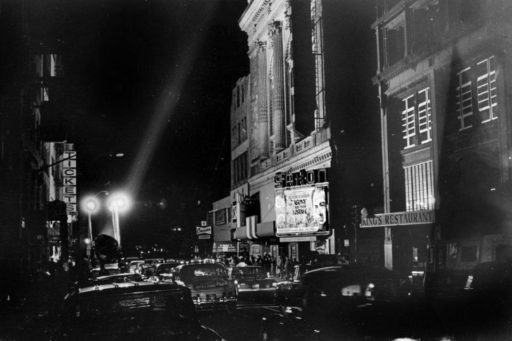 Here’s how the Boston Globe spins the news:

Eversource and National Grid, the two biggest utilities in the state, are shelving a $3.2 billion natural gas pipeline project known as Access Northeast until they can find a way to pay for it.

Their partner in the project, pipeline operator Enbridge Inc., notified the Federal Energy Regulatory Commission Thursday of the decision to withdraw the application for the project.

The companies argue that the pipeline expansion is needed to bring cheaper natural gas to the region’s power plants, particularly on cold days, when demand rises. But they need more time to build political support for legislation that would allow the costs to be shouldered by electricity customers.

In August, the state Supreme Judicial Court struck down a plan put forward by the Baker administration to have electricity ratepayers pick up the tab for the pipeline expansion, ruling it wasn’t permissible under state law. As a result, other New England states put similar proposals on hold.

“Once we work through the legislative [support], we’ll be able to reengage the FERC filing process and be back on track,” said Brian McKerlie, a vice president at Enbridge.

Natural gas expansion has become one of the most hot-button issues in Massachusetts politics, with opponents fighting pipelines at every turn. Three smaller, previously approved projects — a proposed Enbridge compressor station in Weymouth, a recently completed Enbridge pipeline through West Roxbury, and a Kinder Morgan spur in Sandisfield — were not directly affected by last year’s SJC ruling.

McKerlie said the hope was to start construction next year on Access Northeast, a 125-mile project that mostly involves replacing pipes with larger ones in Massachusetts and Connecticut to expand the capacity of Enbridge’s Algonquin Gas Transmission line.

In Massachusetts, the project would mainly involve municipalities west and south of Boston, from West Boylston down to Canton. Construction would have taken as long as three years. But now the timing is unclear.

McKerlie said Enbridge’s acquisition in February of Spectra Energy, the pipeline company that had been leading the charge for Access Northeast, had nothing to do with the decision to withdraw from the federal review process.

Last year’s Massachusetts court decision was a setback for the two utilities, but they said at the time that they would continue to seek a way to pay for Access Northeast.

They say Access Northeast could reduce electric bills by as much as $1 billion a year across New England. They argue that a new infusion of lower-cost natural gas would more than offset the cost of a tariff, allowing power plants to burn gas on cold days, when that gas is often diverted for heating and isn’t available for making electricity.

The Conservation Law Foundation, whose lawsuit led to the SJC decision, didn’t seem ready to celebrate on Thursday.

“It’s positive news [and] reflects that the region has moved on and natural gas is not finding the opportunities or the welcome that it expected in New England,” said Greg Cunningham, a vice president at the Boston environmental group. “We, however, expect there will be an ongoing presence of Spectra and Kinder Morgan at our state houses and interacting with ISO New England over the next year.”

Grid operator ISO New England, which is responsible for making sure the six states have enough electricity, remains concerned about the region’s increased reliance on natural gas as older coal-fired and nuclear power plants shut down. The utilities will play up that concern as they lobby for a change in state law that could allow Access Northeast to go forward.

“It’s clear that the New England ISO is gravely concerned about reliability in the region,” said John Flynn, a senior vice president at National Grid. “The need for this project is not in doubt. . . . Hopefully, we can get cooler heads to prevail and get the votes we need.”

The partners could find a tough audience at the State House. The Senate last summer voted to oppose any effort to pass on natural gas pipeline costs to electricity customers. House leaders could be more amenable, but dozens of rank-and-file members last year signed a petition opposing natural gas expansion efforts.

“That unanimous vote in the Senate last year, that’s a tough one,” said Dan Dolan, president of the New England Power Generators Association. “I don’t know how you convince them. And frankly, the politics have moved more in that direction [of opposing natural gas].”

Lee Olivier, executive vice president at Eversource, said the partners also need legislation passed in New Hampshire, but not in the other New England states.

“We’re in the outreach process, speaking with legislators and listening to legislators about what they would like to see,” Olivier said.

Olivier said the companies could go directly to the FERC to seek approval to charge electricity ratepayers but prefer to work with state officials first.
Typically, the costs of smaller pipeline projects can be passed on to residents and businesses that use natural gas for heating. But the Access Northeast partners say they prefer to spread the project’s expense over the much larger number of electricity customers in the region, instead of trying to impose it on the smaller group of gas users. The focus of Access Northeast, they said, is on providing fuel for power plants, not for heating homes.

“I think more gas in the region is a good insurance policy as we make a transition to clean energy,” said Bowles, a former state energy secretary. “I don’t think it’s important enough that I want to subsidize it.”

ISO New England has good cause to be concerned. Without more pipelines/pipeline capacity in New England, the region is heading for brownouts and perhaps even rolling blackouts. We’ll be right here to crow “we told you so” when it happens. 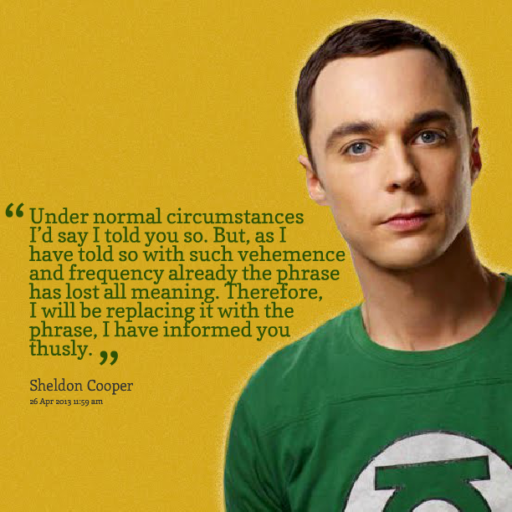 Editor’s Note: There’s plenty of blame to go around here, it appears. The Enbridge/Spectra decision to try working with the states rather than pushing the envelope with FERC is reflective of the sit on your behind and don’t rock the boat strategy of far too many pipeline companies. Granted, they’ve been better at than most, but they should have learned more from their recent struggles in dealing with gentry class fractivists and their shills. Moreover, going directly to FERC is the only way to get the states to move if at all. What is it about pipeline companies that makes them so reluctant to play the hardball their opponents do?

Secondly, there is the Boston Globe. Jim was correct to label them “fake news.” They quote, for example, Ian Bowles of WindSail Capital Group to suggest the Enbridge/Spectra pipeline project would be “subsidized.” Given the facts everyone uses electricity, the gas would go primarily to power plants and the costs of electricity would obviously be lowered as a result, that case is anything but compelling. He just asserts it, of course, and the Boston Globe helpfully repeats it. The really fake news comes in, though, in the paper’s failure to disclose WindSail Capital Group has been the funder of renewable energy projects that don’t compete well with gas, as well NG Advantage, the neat gas company that depends on a lack of pipelines.

Finally, there is the Conservation Foundation, which initiated the lawsuit creating this mess. It’s gentry class fractivists all the way, protecting special interests at every turn. It was part of the La Jolla Junta and is part of a gentry class fractivist gang that includes the Rockefellers, as well as the Energy Foundation. Bradley Campbell, the President of the Conservation Law Foundation, is a solar energy legal expert and trial lawyer, He also created Swan Creek Energy, LLC (a renewable energy company), following service in the EPA and New Jersey DEP during Democrat administrations. I wrote this about the outfit a while back:

Who is the CLF? Well, the dark-money fractivist kingpin funder, the Energy Foundation gave it $490,000 since June, 2013 and an incredible $2,262,000 over nine years according to this extremely revealing rundown on the group. The Rockefeller Brothers Fund, another gentry class funder of fractivist obfuscation, has given it $150,000 since 2011 and the Rockefeller Foundation has reportedly provided it $1,145,000 over eight years. Plus, it earns money through consulting and insurance side ventures. It is, in other words, just another fractivist shill group intent upon fighting change and preserving social privilege by making a wilderness of New England. What better way than to starve the region of energy for any newcomers and ensuring the existing riffraff has to pay so much for it that it will be forced to leave?

Rereading it now, it’s more accurate than ever. The CLF is a nest of snakes funded by other gentry class fractivists and other gentry class types who fund them (e.g., the Barr Foundation). New England is being stolen blind by them and may have to live in the dark as a result.