New England pipeline debates suggest madness has now gripped the minds of folks once extolled by Robert Frost for the ordinary wisdom of the common man.

One of our readers sent me  link this morning to this interesting story about a new restaurant in Hadley, Massachusetts that can’t access natural gas with which to cook:

The Texas Roadhouse along Route 9 in Hadley is scheduled to open on February 29th. A sign on their door says they started hiring on January 4th.

They’ll be powering their restaurant and cooking the food using propane as fuel, not natural gas. And it’s not by choice, it’s because they don’t have another option. Berkshire Gas put in place a moratorium on new natural gas hookups, citing a supply shortage.

Part of me, of course, wants to say “What did you think was going to happen if you resist every pipeline project intended to supply you with more gas?” but that would place the blame on the businesses simply trying to meet demand, not the uppity “haves” who deny opportunities they had to others. That is the real dynamic at play here behind the facade of phony environmental concerns.

Hadley is in Hampshire County, Massachusetts, part of the Berkshires. It is next door to Amherst and is a commercial center for the area. The population grew by 9.5% between 2000 and 2010 (more than three times the rate of the Commonwealth) and 13.3% the previous decade (compared to 5.5% statewide). It receives natural gas via the Northampton Lateral, an offshoot of the Tennessee Gas Pipeline. 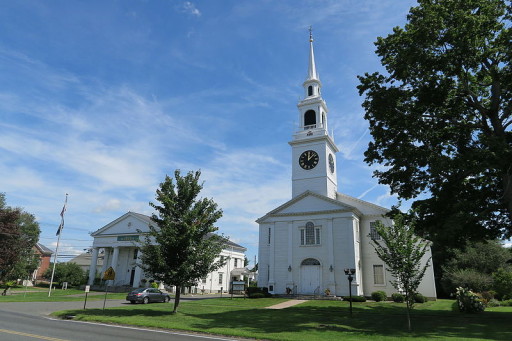 Some 19% of Hadley homes rely upon this gas, with another 9% each using propane and electricity, both of which also depend on natural gas. Almost half use fuel oil, which is much less environmentally friendly than gas and 13% keep warm with wood, which is far worse. One would expect residents of Hadley and vicinity might want more natural gas to replace the oil and wood, not to mention the more expensive propane, while also accommodating the growth. But, that assumes the kind of people Robert Frost wrote about, who knew things such “good fences make good neighbors,” still occupy those environs. They don’t. 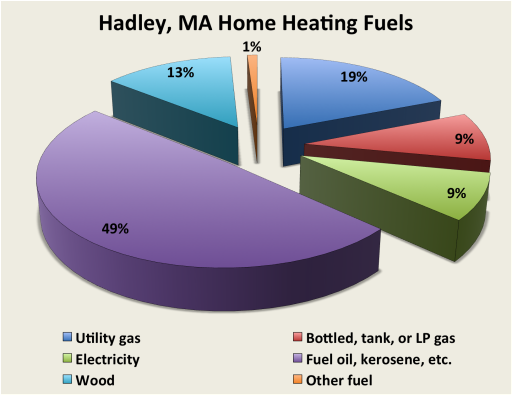 We find a doctor by the name of Martha (“Marty”) Nathan of nearby Northampton writing this nonsense (emphasis added):

Psychological warfare is being waged in Massachusetts towns as natural gas local Distribution Companies (LDCs) declare moratoria on new subscribers until the building of Kinder Morgan’s Northeast Energy Direct (NED, also known as the Tennessee Gas) Pipeline is agreed upon.

Every day for months I have been seeing Berkshire Gas ads explaining its policy of preventing new gas hookups, citing “pipeline capacity constraints” limiting gas availability. My understanding of gas supply is fuzzy, though I suspected from the first that any time pipelines are being mentioned by energy companies in western Massachusetts, Kinder Morgan is probably behind the curtain.

The problem is that the only consumer demand that Columbia is looking at is that occurring on “design” or peak demand days — in the middle of the winter, when the furnace in every house is chugging and electrical output, much based now on the burning of natural gas, is high.

Though never explicitly stated in their filings or press releases, yearly peak days can be counted on the fingers of one hand. On all other days, supply well-surpasses demand.

On design days there are alternatives — either shipped in or locally stored liquefied natural gas or gas bought on the open market, which can and should be a part of any distributer’s plan. In Amherst, specific temporary stopgap measures have been proposed for the design days, till long-term answers have been implemented…

The truth is, though, that the main market for the NED fracked gas is overseas. From Dracut it will be sent to Nova Scotia and then across the Atlantic. There simply is not enough demand in the U.S. to absorb the enormous amount of frackable gas in the Marcellus Shale and prices (and therefore profits) have plummeted.

The only one engaging in psychological warfare, of course, is Marty Nathan who lives in a small city where this is the pattern for home heating fuel: 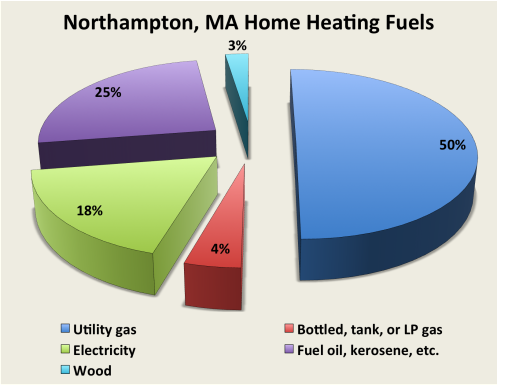 Interestingly, she and her husband live in a home with steam heat according to tax records, so there is 2 out 3 chance she uses natural gas, given the fact half of all homes there are heated with gas and another quarter are heated with oil, the ways to create the steam (no coal used in Northampton).

Part of the psychological warfare, of course, is lying – creating the myth that the point of the pipeline is to export natural gas. Never mind that there is a moratorium due created by the shortage of capacity. Never mind that Hadley is growing at three times the rate of Massachusetts. Never mind that the pipeline is already subscribed for New England use. Never mind that shipping Marcellus/Utica Gas gas to Boston for export makes little sense when Cove Point is closer and already permitted. Never mind any of the reality – just make an assertion completely unsupported by the facts and stick to it. That’s the M.O. of the fractivist movement; the playback for New England pipeline politics. It’s not “fuzzy” thinking as Nathan would have us believe but, rather, bright and bold-faced lying.

Worse, does anyone imagine Nathan won’t also be opposed to the LNG storage she says is the answer for those peak periods of winter use? Does anyone believe she won’t point the finger of blame at the gas industry when she can’t get heat one cold winter day? She obviously has little comprehension of economics or the regulatory world, both of which demand one always be prepared to accommodate peak use. That’s the whole damned point! New York DEC, for example, requires a public water system to be able to supply twice the needs of the population it serves with the best water well out of production precisely because there must be redundancy in the system to accommodate emergencies and peak usage. Is home heating fuel any less important?

Then, there’s this from another article on the subject:

[Meanwhile] developer Barry Roberts of EV Reality Trust was surprised recently to hear he couldn’t get natural gas service for the 35-unit condominium complex he’s building for residents 55 and older off East Street in Hadley near the bike trail.

“I don’t call this mid-year and already there are no more new gas installations available,” he said.” I believe them, they don’t have enough gas supply. But they are saying it’s three years away even if Kinder Morgan gets approved. That’s a long time. I’m going forward with propane.”

But that means installing 35 1,100-gallon propane tanks at $1,000 a piece. It also means that condo owners will have to get their gas delivered.

By buying the tanks outright, he’ll preserve the right of the future condo board to buy the gas from the highest bidder. Propane companies will provide tanks only if they have the exclusive right to fill them, Roberts said.

“Everyone knows electricity is too expensive and no one wants to deal with oil,” he said. “Everyone wants gas heat.”

Yeah, everyone but folks such as Marty Nathan and the new New Englanders like her husband Elliot Fratkin, a Professor of Anthropology at Smith College, living the good life and telling others there’s no need for growth, economic development or natural gas for anyone else. Their solution: just stock up a little LNG to get everyone through the rough patches when the temperature drops below zero, which it did seven times last January in Hadley, and it’ll all be fine. Sure…