Net-Zero New England is the goal and natural gas is the solution according to Obama’s former Energy Secretary Ernest Moniz’s team.

A very interesting study just came out from a group founded by former Obama Administration Secretary of Energy, Ernest Moniz. The group is The Energy Futures Initiative, Inc. (EFI), which is a “nonprofit clean energy think tank dedicated to harnessing the power of innovation–both in technology and policy–to create clean energy jobs, grow economies, enhance national and global energy security, and address the imperatives of climate change.”

The report is titled “Net-Zero New England: Ensuring Electric Reliability in a Low-Carbon Future.” It was produced with help from Energy and Environmental Economics, Inc., an economic consulting firm “focused on the clean energy transition.” It is well worth perusing and below are key excerpts showing just how important natural gas is to a net-zero New England (emphasis added):

New England’s GHG emissions in 2016 (the latest year with published estimates for all states) equaled 170 million metric tons of CO2-equivalent (MMT CO2e), roughly 3% of the U.S. total. Massachusetts accounts for roughly 44% of total New England emissions, primarily due to its larger population. Every state besides Vermont has seen gross emissions reductions since 1990, aided by the power sector transition from coal to natural gas. In 2017, all six New England states had lower per-capita energy consumption than the national average, with Rhode Island having the lowest in the country…

New England’s electricity supply is already less carbon-intensive than much of the rest of the country. Natural gas fuels 40% of the region’s electricity generation today, and its displacement of oil and coal over the past decades has contributed to halving power sector emissions since 2005…

A cost-effective, reliable, and decarbonized grid requires firm generating capacity. Firm capacity is capacity that can provide electricity on demand and operate for as long as needed; today, natural gas and nuclear generation are the primary sources of firm capacity in the region. While today’s renewable generation and battery storage technologies will play large roles in the future New England system, relying on these resources alone would require very large quantities of renewables and storage (Figure ES-2) and would be extremely costly (Figure ES-3).

In practice, as much as 46 GW of firm capacity could be needed in 2050 to ensure resource adequacy; our Base Case includes about 34 GW of gas generation, 3.5 GW of nuclear, 8 GW of imports and 1 GW of biomass and waste (under High Electrification loads). Significant gas capacity is retained even though the gas plants operate far fewer hours and contribute less energy (and emissions) to the region than today. New resources may be developed and deployed in the future to provide low-carbon firm capacity such as advanced nuclear, natural gas plants with carbon capture and sequestration (CCS), long duration energy storage, or generation from carbon-neutral fuels such as hydrogen.

These resources would require significant investments in supporting infrastructure; for example, natural gas with CCS or hydrogen would require dedicated pipeline infrastructure connecting New England to regions with suitable geology for carbon sequestration or hydrogen storage. Until one or more of these technologies is widely and commercially available, natural gas generation is the most cost-effective source of firm capacity, and some reliance on gas generation for resource adequacy is consistent with achieving a 95% carbon-free electricity grid in 2050 as long as the generation operates at a suitably low capacity factor..

A broader range of technology choices lowers costs and technology risks. The availability of low carbon firm generation technologies – such as advanced nuclear or natural gas with CCS – could provide significant cost savings and reduce the pressure of renewable development on New England’s lands and coastal waters.

The 2050 incremental cost to achieve an electricity sector target of 2.5 million metric tonnes (MMT CO2e) relative to a Reference Case (50% renewables) falls roughly in half when natural gas with CCS is made available, assuming technology cost declines are achieved. When advanced nuclear technology is also available at scale, the cost of decarbonization declines further (Figure ES-3).

In addition to reducing direct costs, a portfolio approach for ensuring the availability of low-carbon firm generation resources mitigates the risks associated with the possibility that one or more technology options does not materialize as expected. Issues including uncertain innovation time horizons, difficulty building supporting infrastructure, incompatibility with other policy goals, or alignment with the decisions of neighboring regions may limit the role of some technologies in helping meet New England’s climate goals…

Today, natural gas capacity (CTs and CCGTs) provides the most cost effective source of firm capacity due to very low capital costs. A key finding of this study is that up to 10 GW of new natural gas generation may be needed in New England, even under scenarios in which CO2 emissions are reduced to 2.5 MMT, in order to ensure reliability during extended periods of time in which wind and solar energy are not available. This is especially true under the High Electrification scenario, in which peak electricity demand increases to 51 GW by 2050 largely due to increased heating loads…

In Figure 4-20, we report the annual electricity costs and emissions reductions for these sensitivities, relative to a Reference Case. z The figure highlights the role of firm combustion-based capacity (CTs and CCGTs) in reducing the cost of decarbonization.

When new combustion capacity is not allowed (shown in green), the incremental cost to achieve 2.5 MMT/yr more than doubles relative to a scenario in which new gas generation is allowed, to nearly $10 billion per year relative to a Reference (50% RPS) case. If all new and existing combustion capacity is retired (shown in red), the incremental cost of fully decarbonizing the electricity sector is $24 billion/yr more than the Reference Case, more than four times higher than a scenario in which combustion of zero-carbon fuels is allowed.

Get that last part? Despite the politically correct language of the report, it not only hedges all bets on renewables to get to net=zero, but also points out their unaffordable nature. It illustrates, too, the role they play in making natural gas more expensive even though it is absolutely essential to any net-zero plan. It’s all in this chart: 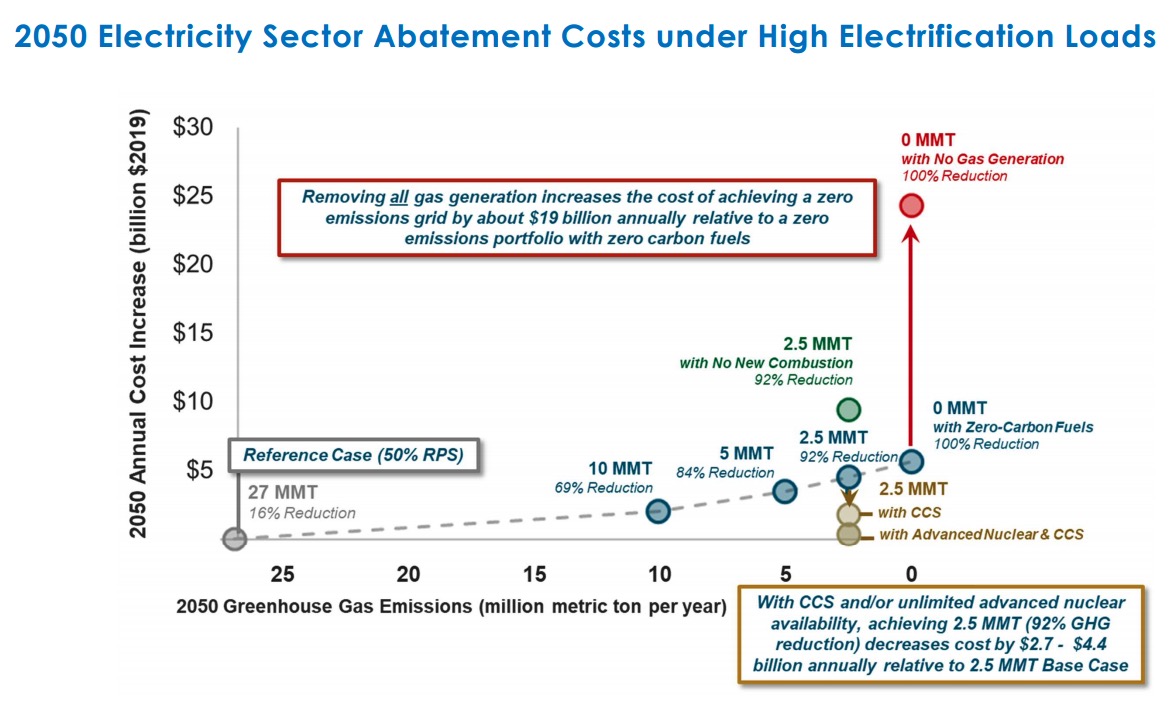 This is, in fact, the chart that says it all; New England is dead without natural gas. No net-zero without it, in fact.