Nick Grealy, our liberal-progressive ally from the UK, offers his take on what’s missing from the US shale discussion: mature liberal voices of reason.

I’ve mentioned before the Zombie Facts of Shale, defined as shale misapprehensions founded on either fear or misinformation. They’re Zombie, in that they are the living dead, non-facts or wrong facts that just keep on coming, the Whack-A-Mole of 21st energy discourse. We think they’re dead and buried, but then they either pop-up somewhere else, or more often, a new generation of fractivists suddenly discover the F word.

But, in the UK, the debate has matured in that the vast majority of public officials, the media and even NGO’s (if silently for now) see how not only are fears of shale unfounded, but that actually natural gas can and should be presented in a positive way.  An example is an event that somehow or other I missed the other day in London.

What a difference from two years ago. Barker is the UK’s most avid supporter of solar,  reportedly (but not in any mainstream media), told environmentalists:

Climate change minister Greg Barker has accused environmental groups of being “foolish” and “morally disingenuous” for opposing shale gas and fracking, but “doing little” about coal.

Giving the keynote speech at a meeting on shale gas at Westminster, Mr Barker said it was easier for campaign groups to go to Balcombe, where Cuadrilla drilled an exploratory oil well last year, and “protest in the summer sunshine”.

Mr Barker said for climate change reasons, coal was the enemy and the most important thing was to keep it in the ground.

He said he had a clear moral message to those who felt, like he did, that climate change was the biggest threat to humankind in the 21st century:

“It is time to come down off the barricades.”

He said: “We should not fear gas. Nor should we fear fracking. And we should certainly not trust knee-jerk or emotional reactions to what is simply a particular technology. Fracking is not some Frankenstein technology.”

Across the water, it’s Night of the Living Dead déjà vu in New York State as this picture, from the same day as the above event in London, illustrates.

Here’s the words that back up the story:

In a decision with far-reaching implications for the future of natural gas drilling in New York State, its highest court ruled on Monday that towns can use zoning ordinances to ban hydraulic fracturing, the controversial extraction method known as fracking.

I’ll stop here to note I lived in the US for 25 years, went to high school there and appreciate baseball, hot dogs and apple pie. I also lived in New York, which makes me as American as living in London makes one English does in these days of world cities (not either very English or American). So, I get an appreciation of what’s going wrong in the shale debate in New York, and by extension the rest of the US.

The picture shows the issue in New York: These should be my people, but liberal New York Democrats think it’s trendy and progressive to hate fracking. Check out the signs. Taps on Fire?  How old is that? But, that’s a sign of both zombies coming anew to the shale debate and, (here I’m going to offend New York liberal friends) people being either mind-numbingly stupid, or completely gullible or just intellectually lazy.

Someone in Europe has an excuse. To the average German, Pennsylvania is as alien as Texas and this leads them to being influenced by Gasland or wandering US fractivists like Sandra Steingraber or Elizabeth Arnold. But the debate in Europe is growing up, while positions in some parts of the US are getting more entrenched than ever.

Two years ago, I visited Dimock Pennsylvania, the town that’s treated as some sort of shale Chernobyl by antis. Three hours later I was in my old neighborhood in New York having someone explain to me how Pennsylvania was being poisoned, no one could drink the water and the taps were catching fire. Three hours. Google Maps put the distance between Dimock and Manhattan as a mere 154 miles (see MapQuest version below). But the distance inside people’s heads is wider than the Atlantic. 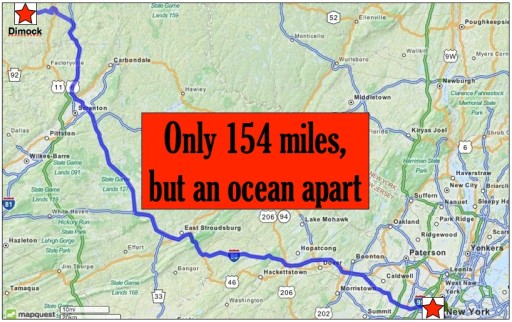 Even worse, the distance from the NY State towns in the case, Dryden and Middlefield, is less than 70 miles to Pennsylvania.  There are two failures at work there:  Not only have many residents convinced themselves that 70 miles away an environmental catastrophe is brewing, but they have convinced their town government as well. Has curiosity as an intellectual construct ceased to exist? Can one side simply tell someone a verifiably false fact and the other party automatically follows?

I can imagine that many of those in the photograph see themselves as worldly and sophisticated. They are against fracking not because they have the slightest clue what it is, or that they even begin to know what happens when they flip a light switch, but because people they trust on other matters tell them it’s bad.

That, obviously, isn’t the majority of Americans, just as the majority of Europeans don’t follow extreme positions either. But, the media do have a certain amount of accumulated bias simply because in New York they all know each other. A good example is the negative crossover between the Gasland tendency and celebrities. David Letterman is a late night TV host who is an American institution and has had several on air rants about shale:

In the US far more people watch Letterman than most news shows put together and yet it appears, for various complex reasons, Letterman was left unchallenged.

The people on the New York sidewalk protesting against Andrew Cuomo signify the extreme liberal wing of Manhattan’s West Side. In the days I went to NYU in the seventies, the Communist Party regularly out polled Republicans in the West Village. New Yorkers of the deep green wing, just as in Europe, prefer to be ideologically pure than to be in power and remain unable to see how they defeat the centre ground by being extreme and thus abandon all their agenda by being unable to compromise on a portion of it.

One answer is for the moderate, mainstream wing of the Democratic Party to reach out to the media, environmental groups and community groups. Outreach by gas companies themselves has often been successful in Pennsylvania itself, but an abject faiure in Manhattan and downstate as far as I can tell.

Americans, contrary to popular European opinion, are not stupid. Certainly, I have been fortunate enough to meet a far wider geographic and political mix of Americans than I ever did when I lived in New York and had the classic vision of America pictured below.

The global anti fracking alliance is an echo chamber. Gasland boomed across the Atlantic and strangled French shale gas at birth and then impacted shale worldwide. The reverberation now goes back across to place like Dryden and Middlefield: Shale gas must be bad if the French have banned it.

Someone has to step into this unvirtuous circle and speak to people in language they understand and trust. Otherwise, things may get out of hand and something stupid will happen in the US which will magnify very loudly in China and elsewhere.

Editor’s Note: This a condensed version of the full article and, for Nick’s in-depth liberal perspective, click here. He and I have quite different views on a whole range of subjects, but he is the pre-eminent liberal voice for fracking on both sides of the big pond and I’m thrilled to have him as an ally and friend. Let me also add that I’m right now talking with some Manhattanites of just the sort he’d like to see rise up and I believe some of the will, soon. They were there at the Cuomo fund-raiser where that protest took place and it amounted to a handful of Zombie shale campaigners who weren’t even noticed by the assemblage of liberal New Yorkers inside. The New York Times did notice them, of course, and amplified their tiny voice but, inside, no one knew they were there and not a word was said about fracking.