It isn’t just Texas. It’s also Oklahoma and it’s a life or death situation in many cases with natural gas reserves being critical.

The situation in Texas is getting all the attention, but it’s also Oklahoma. The cold weather global warmists keep telling us is behind us is causing enormous harm and threatening lives there as well. I love Oklahoma, having recently done some consulting work there on behalf of one of the tribal nations and having associates there. I love the people, the largely rural character and the practical nature of the state. And, I’m profoundly saddened by the crisis in which Oklahomans find themselves. It’s a situation that has illustrated the critical importance of natural gas reserves. 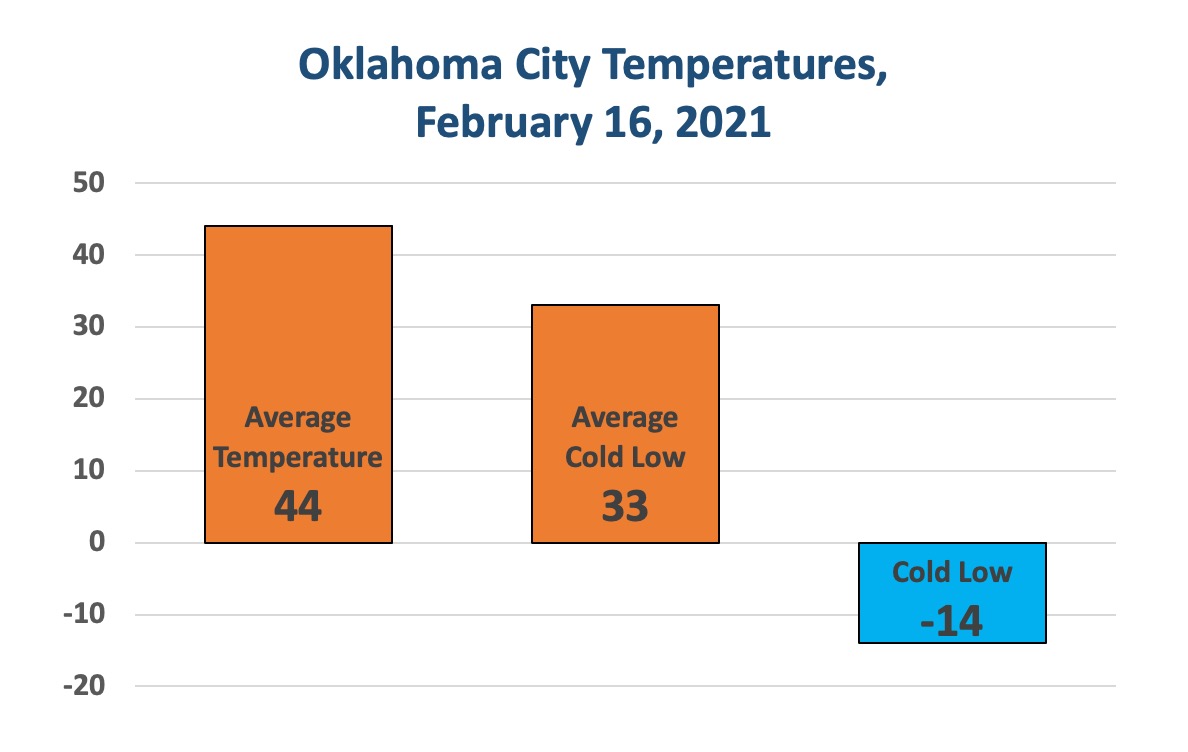 My connections to Oklahoma also include an acquaintance from long ago high school days. Her name is June Chesser and she is the sister of NaturalGasNOW guest blogger Betty Sutliff. She was kind enough to share what’s going in Oklahoma and to offer some reflections on the importance of natural gas reserves. Here is what she had to say:

I was talking to Betty yesterday and expressing my frustrations and she thought you might like to hear what happened   I’ve included some statistics about kidney dialysis which I obtained off the internet. Pull the plug on that procedure and you almost have as many people as have died from COVID 19 in the US.  Plus, we’re told three times more African Americans are on dialysis as caucasians.  So, it is a problem for al and especially so for some.

In December, 2019,  Don, my husband, was diagnosed with chronic kidney disease.   In 2005, he had had one kidney removed due to kidney cancer.  They tracked his keratin levels for three months and determined that he had to go on dialysis.  Because of the COVID 19 crisis, hospitals could not put in the needed port until May.  By that time, his kidney function was less than  10 percent and he was quite sick.  He decided to go on peritoneal dialysis (at home requiring four exchanges taking approximately nine hours).  He does it at night and has to be connected to a cycler, that acts as his kidney.  Needless to say, it was a life changer for us.

We thought we had the power issues covered because we had a full house natural gas generator installed.  So, if the power went off, the generator would kick in and the machine would continue to work.

What a rude awakening we had on February 16 when OG&E, our power supplier determined that they would selectively turn off power (also known as rolling power outages) to conserve power because their sources were low.  The windmills had frozen, so they couldn’t provide power. Their natural gas suppliers were not able to fill their needs because there were no surplus sources of natural gas due to the fact suppliers had decided to cut production.

Also, although Oklahoma is a supplier of natural gas, they could not get an immediate supply from them in-state suppliers because the well heads were frozen due to the below normal temps—below zero for several days

On top of all this ONG, our natural gas supplier said their supplies were low so they might have to do similar cut offs to their customers and do rolling gas cutoffs.  So, our Plan B to supply power via natural gas could also be in jeopardy.

This is a life or death situation.  Reportedly, over 468,000 people in the US are on dialysis of some sort—either at a center or at home.  I have no clue if they are Republican or Democrat, what race or religious affiliation they are.  These are lives that can be shut out as a result of an extended loss of power.  I was unaware of how low our natural gas reserves were or even how important it is to keep adequate natural gas reserves, but I am now.  In an instant, someone with the swipe of a pen, can affect hundreds of thousands of lives.

Our politicians who think we can do everything on green power are wrong.  Wind mills are not as dependable as our fossil fuel resources—which can be stored in reserve for critical times.  We have all kinds of windmills in Oklahoma, but when we needed them they were frozen and off the grid.

Luckily, we didn’t have either our power or natural gas cut off, but it was an eye opener as to what could happen.  So, Tom, please continue to advocate for those of us whose lives depend on fossil fuels to keep us alive.

This is the real world, not some Green New Deal fantasy espoused by some trust-funder or socialist kid bartender from the Bronx or financed by hedge fund types hoping to make a killing in green subsidies. There are real lives at stake and wind energy is no substitute for natural gas and natural gas reserves that can be accessed whenever needed. The problem in Oklahoma is a tail (wind) that’s been wagging the dog (gas). It cannot continue. There’s room for wind, but it cannot replace natural gas and the essential dispatchable role it plays in our energy security.