The future of electric generation is in a combination of combined cycle natural gas generation and renewables, so why do so many enviros fail to see it?

The Energy Information Administration (EIA) is out with an updated Electric Power Monthly report illustrating just how electricity generation is changing in this country. It’s good news for all Americans as natural gas and renewables are, together, playing a huge role in the way new electricity is being produced.

Looking at the last decade it’s apparent they’ve grown together, which is not what a lot of renewables advocates want to see but it’s a fact. Moreover, if we want to continue to improve the environment we’ll do everything we can to generate more of both because the alternative is coal and it’s far from dead. The truth is that we need it all and that includes continuing improvements in energy efficiency, which have also contributed enormously.

There are several things that jump out when examines the EIA statistics. Here, for example, are two pie charts illustrating our electric generation in 2004 as compared to 2013: 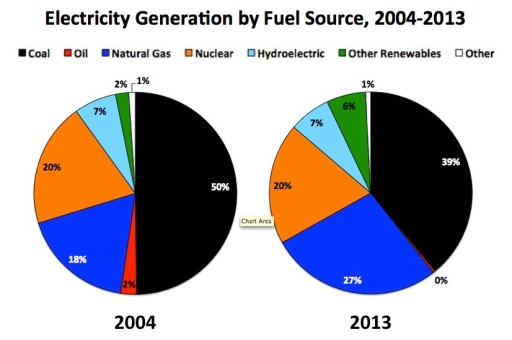 Notice there is no significant change in nuclear or hydroelectric, but oil has basically disappeared from the scene as an electric generator and coal has taken a major hit, although it remains the largest generator by far. The two fuel sources that have grown in a major way, and grown together, have been natural gas (up from 18% to 27%) and renewables (up from 2% to 6%). Our associate Nick Grealy, from No Hot Air, has been making this point repeatedly, of course, but this latest EIA data demonstrates it yet again.

Don’t think coal is dead, however. The latest data, from 2013 on, which is still subject to revision, shows coal increased its share between 2012 and 2013 and continues to do so through the first six months of 2014, which is one of the reasons, undoubtedly, for our carbon emissions increasing slightly after several years of huge reductions thanks to natural gas conversions. We don’t go apoplectic over CO2 here at NaturalGasNow, but for those who do, this ought to mean something.

What matters far more to us is that we know how much cleaner the air is with conversions of electric power plants from coal to natural gas fuel. We documented this in the case of UGI’s Hunlock Creek Energy Center example where the PM <2.5 count went from 211.7 to 0.1 tons per year as output was tripled – literally a 99.95% reduction. Shifting back to coal threatens these extremely meaningful health improvements that we all ought to get behind if we’re serious about environmental progress.

We’re not Germany, however. We’re not building new lignite coal plants while using renewables to divert attention. The EIA data includes this interesting chart showing what type of new electric generating capacity is being added:

No new coal power plants have been built yet this year. Meanwhile, wind capacity has doubled, and both solar and natural gas combined cycle capacity numbers have soared. Natural gas combustion turbine systems are going by the wayside as the efficiency of the combined cycle systems takes over. Capacity numbers alone, though, are highly misleading as many renewable systems only generate electricity at about 25% of capacity. Other simple cycle plants, including natural gas powered plants, do little better, but combined cycle plants – the ones we’re building today – can achieve up to 60% according to this excellent summary. Here’s a video from the same source that illustrates how combined cycle plants operate in lay terms:

The efficiency of this system means natural gas offers far more electric generation than capacity numbers alone suggest and they’re much less expensive than almost anything else per unit of energy generated as this EIA analysis of levelized costs indicates. Only geothermal energy shows an advantage and that has limited application (and can involve fracking and methane migration issues). No other renewables come close to natural gas combined cycle plants in terms of costs or efficiencies.

Renewables on a soft scale, however, where they complement natural gas by reducing electric generation demands and allow the conversion of more coal plants to combined cycle gas plants make huge sense. The capacity number discussed above don’t account for smaller solar and wind facilities that can serve this function, particularly if they become competitive without subsidies. We can’t afford to subsidize all our energy and, therefore, there are limits on how far we can go with them, but when the subsidies end competition forces down costs, watch out. They’re not there yet but getting closer, which is a good thing.

When we can devise renewable systems that don’t require taxpayer subsidies they will be used by virtually every home and business and reduce electric demand to the point we can devote our natural gas to power plant electric generation, manufacturing, petrochemicals and the like, reducing our reliance on coal, nuclear and hydroelectric. All of these have issues, but need to be part of our energy mix for security purposes. Still, the future is in a combination of natural gas and renewables, which is already contributing to  a cleaner environment. They’re both electric.

4 thoughts on “Natural Gas and Renewables Are Electric”