Here’s more material sent along by Natural Gas NOW readers; great stuff highlighting the power of natural gas and the absurdity of fractivism. Check out the links and other short bits below:

Natural Gas Is The Flexibility Needed For More Wind And Solar

Fractivists universally suppose solar and wind energy are the replacements for natural gas and in doing so, they get it completely wrong, for reasons we too often neglect:

Looking forward, more laws requiring more wind and solar like Renewable Portfolio Standards will also require a more flexible power grid, with natural gas at the center of that. As seen in the figure below, this is why as more wind and solar generation capacity get added, even more natural gas capacity is added. As I figure it, some 35 states will have natural gas as their main source of electricity by 2022. Nowhere is this more clear than in the great state of Florida, with 21 million people now our third largest state. The “sunshine state” is now surging toward having gas generating 75-80% of its electricity by 2022. I figure that the U.S. needs to add 25,000 megawatts of gas peaking capacity to our grid over the next decade to support the wind and solar build-outs.

There are limits to the growth of renewables that typically go ignored. That’s because of “high grading,” where the best sites with the best wind and solar resource get picked first. As these “sweet spots” get exhausted, this means that new builds for wind and solar won’t be as easy as some claim. This is why wind in particular is expected to eventually start to slow down drastically for new capacity builds in the 2020s, as seen in the figure below gathered from U.S. Department of Energy forecasts. In stark contrast, combined cycle gas plants aren’t geographically limited: they can really be built anywhere. 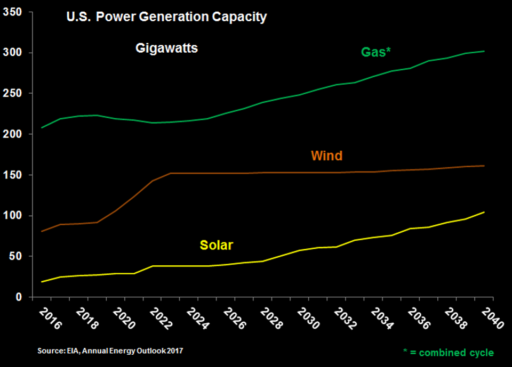 So, gas is the glue of the new U.S. electric power system, not just adding critical flexibility but also reliability. A May 2017 study here by The Brattle Group reports that specific advantages of natural gas – such as ramp rates, dispatchability, frequency response – are fundamental to grid reliability, and will become even more vital as more wind and solar come onto the grid. Gas is easing the adoption of more wind and solar and changing the definition of baseload power. To illustrate, “New York’s grid operator yesterday said the state’s grid can sustain the loss of a major nuclear station near New York City if some combination of three new natural gas projects replaces it,” here.

The Russians are apparently using the UK as a distribution point for their LNG and sending a signal they’re available if the Brits don’t take advantage of what’s under their feet:

The UK has received its first shipment of liquefied natural gas (LNG) from Russia, a 170,000-cubic-meter cargo from Yamal LNG, but the fuel is likely to be reloaded for delivery elsewhere, Kallanish Energy learns…

National Grid, the operator of country’s gas grid and the Grain LNG terminal, confirmed on Tuesday the shipment had arrived, but didn’t enter the grid. Instead, it was offloaded to storage. Christophe de Margerie is now heading back to Russia’s Sabetta port.,,

“Feeling cold? Help is on the way,” the Russian embassy in the UK tweeted last week, fuelling controversy around Britain’s reliance on foreign energy supply.

The UK imports over 50% of its energy today and by 2035 it will import nearly 80%, UKOOG CEO Ken Cronin said, making a case for domestic onshore gas exploration.

“We now see a gas tanker that has come from very far away with the associated environmental impact of transporting gas thousands of miles,” he said. “Surely it is better for our economy and our environment that instead of relying on others, we produce the gas from underneath our feet…”

So why hasn’t the UK moved on fracking earlier? Well, the Brits are notoriously careful and polite to a fault, of course. You might say there were the original practitioners of political correctness, in fact. The Russians? Well not so much.

It is only the Brits who’ve been obsessed with political correctness, but the Germans as well, as they’ve deliberately sent their electricity prices to the moon in pursuit of an energiewende nirvana, and the Russian bear is pouncing:

Russia‘s gas exports to Europe and Turkey rose by 8.1 percent to a record high 193.9 billion cubic metres (bcm) in 2017, Alexei Miller, head of Gazprom, said in a statement on Wednesday, despite EU efforts to cut its reliance on Russian energy.

Gazprom, run by Miller, a close ally of Russian President Vladimir Putin, supplies more than a third of the European Union’s gas…

Lithuania, which began importing LNG from Norway in 2014 and became the first ex-Soviet state to buy U.S. natural gas in August, refused to renew its contract in 2015.

The company faces more trouble, analysts said, as its major long-term contracts expire between 2021 and 2035.
Poland, a gas client since 1944, has said it will not renew its contract in 2022.

Interesting how the Poles and Lithuanians seem to value energy security over political correctness, isn’t it?

There’s Real Pollution to Worry About and it’s the City?

We’ve heard for months from radical nuns and fractivists how pipelines would irrevocably damage Lancaster, but it seems the city itself has been the culprit:

The city of Lancaster, Pennsylvania has agreed to comprehensive measures to end discharges of untreated sewage and other pollutants to local waterways from the City’s combined storm and sewage system, U.S. Environmental Protection Agency (EPA), the U.S. Department of Justice and the Pennsylvania Department of Environmental Protection (PADEP) announced today…

Under the settlement, the City of Lancaster has agreed to implement measures to significantly reduce combined sewer overflows, or CSOs.  These include improving pump stations and reduction of flow through a comprehensive long-term plan to improve the ability of the entire system to handle flow… 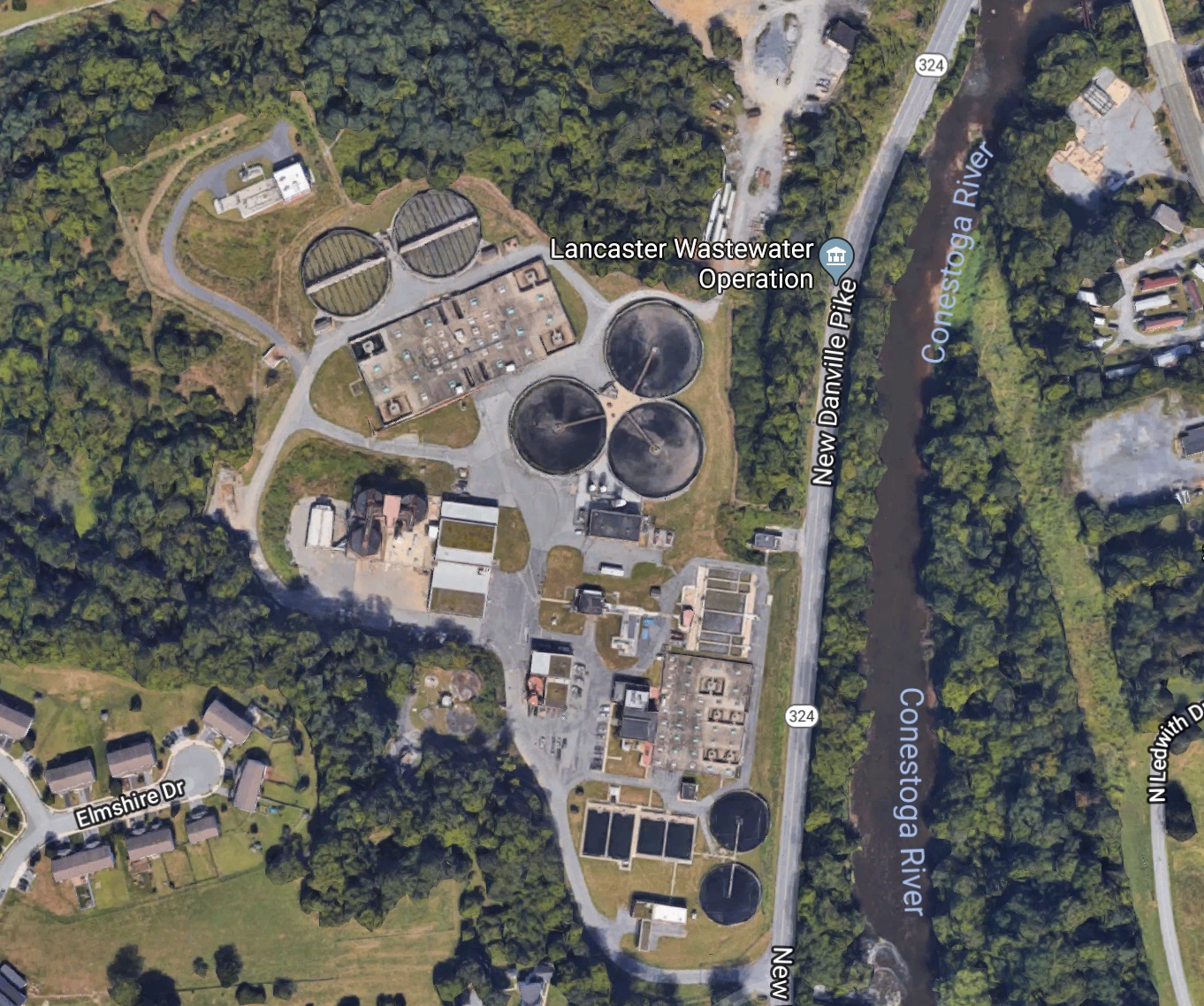 The Clean Water Act complaint, filed with the proposed consent decree, alleged unlawful pollution discharges caused by numerous overflows of untreated wastewater from Lancaster’s combined sewer system.  This system carries rainwater runoff, domestic sewage, and industrial wastewater in the same sewer pipes to a wastewater treatment plant, where it is treated before discharge to a water body.

During periods of heavy rainfall or snowmelt, the water volume exceeds the system’s capacity – causing combined sewer overflows.  The City has five CSO outfalls, which overflowed at least 392 times in the past five years, discharging nearly 3.8 billion gallons of untreated, polluted water into the Conestoga River, a tributary of the Susquehanna River and the Chesapeake Bay. These CSOs contain not only stormwater but also untreated human and industrial waste, toxic materials, and debris.

The settlement between the Department of Justice and the city of Lancaster resulted from several years of investigation of alleged violations by EPA and PADEP, followed by extensive federal-state negotiations with city officials.

And, those radical nuns are worried about fracking and pipelines?

Boston is suffering in deep cold and energy prices are skyrocketing for Bay Staters but it’s hard to be empathetic, isn’t it? Here’s what Massachusetts State Senator Michael Rodrigues of Westport recently wrote to the Commonwealth’s Secretary of Energy and Environmental Affairs:

As the Section 83D Massachusetts Clean Energy RFP selection process is coming to a close, I wish to offer my observations and insight as a primary author of the legislation. This law has given Massachusetts the opportunity to alter our energy future and allow the Commonwealth to continue its leadership on these issues.

Although I did not initially anticipate it, I was excited to learn of Deepwater Wind’s creative decision to  submit a bid in the 83D procurement process. Deepwater Wind’s proposal, called Revolution Wind, is for 144 megawatts, with a potential of as high as 288 megawatts. I’ve been told that the Revolution Wind bid, which includes transmissions costs, has been priced extremely competitively.

There are a number of reasons I believe it is in the state’s interest to strongly consider the Revolution Wind proposal. Revolution Wind provides power to the South Coast of Massachusetts where the need is the greatest. With the recent closing of Brayton Point and the imminent closing of the Pilgrim Nuclear Power Plant, nearly 2,500 reliable megawatts of energy will no longer be available to  the  South Coast. Electricity coming from Canada would have to travel through expensive and lengthy transmission lines to reach our area in southeastern Massachusetts. However, the Revolution Wind project is proposed to be built off the South Coast of Massachusetts, just 20 miles offshore, making it a reliable, cost-effective, and home-grown energy resource.

I can’t blame the honorable senator for lobbying for a project in his backyard but I hope he doesn’t believe 2,500 megawatts of electricity already disappeared, or disappearing as I write this, is going to be replaced by a heavily subsidized and sure to be opposed future off-shore wind project. The wind project, rated at 144-288 megawatts, will, in reality, deliver only a quarter of that and perhaps replace as little as 1.5% of the 2,500 MW needed.

Wind is only low-cost if someone else is paying a big part of the bill. Its low capacity factors and intermittency mean it will take decades and many billions to replace the 2,500 MW. Not only that, but gas will be needed to provide electricity when the need is high and the wind doesn’t below. Senator Rodrigues ought to get serious about pipelines and explain the facts of life to these people if he’s serious about rescuing Bay Staters from the cold descending upon them.